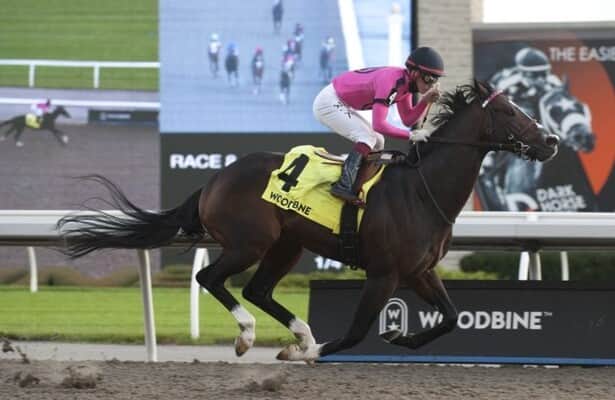 Frosted Over, under leading rider Kazushi Kimura, pulled off the mild upset in the Grade 3, US$128,668 Ontario Derby on Sunday at Woodbine.

Swot Analysis quickly crossed over from post seven to lead his seven rivals into the first turn and through an opening quarter in 25.63 seconds, as Kimura and Frosted Over settled into second spot, 1 1/2 lengths behind the leader.

It was status quo for the top pair after a half reached in 50.21 seconds with Kimura keeping a patient hand on his charge and close tabs on the pacesetter. After three-quarters timed in 1:14.26, Kimura called on Frosted Over and the Gary Barber-owned bay answered emphatically, coasting by the leader and holding a half-length advantage at the stretch call clocked in 1:38.14.

“I knew today it was a strong wind, so I just wanted to cross to the front,” Kimura said. “My horse is a closer, and it was smooth to get a good position. I was just the hand to make him steady. I’ve liked this horse since I broke the maiden. He was at one point training for the seven furlongs, and I was like, ‘Man, that horse is going to be a stakes winner,’ and he did it today.”

Congrats to the connections of #FasigGrad FROSTED OVER, winner of the Ontario Derby (G3) at @WoodbineTB!

Winning the race is nothing new for Kimura.

“I have been having an amazing year, and you know what, last year I won the Ontario Derby (with Field Pass) as well.”

It was the third win from six career starts, third in the past four engagements, and first stakes victory for Frosted Over.

The Mark Casse trainee finished ninth in his debut last October at Churchill Downs and followed it up with a sixth-place effort at Fair Grounds in December.

The son of Frosted-Candy Crush broke his maiden in his three-year-old opener on June 20 at Woodbine, finished fourth in the Marine Stakes (G3) on July 11 and arrived at the Ontario Derby off an allowance score on Sept. 11.