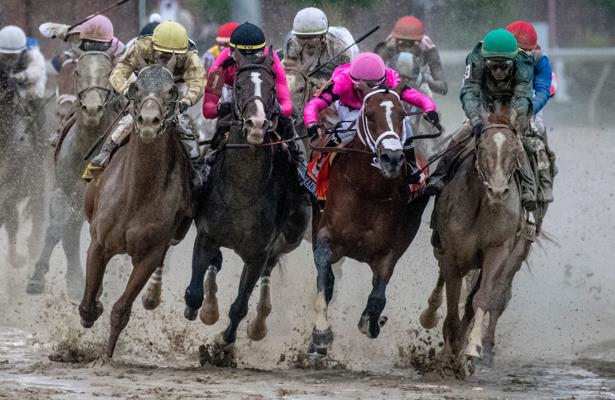 More than 20 minutes after Saturday's 2019 Kentucky Derby, stewards disqualified Maximum Security, the first horse across the wire, and named Country House the winner in a controversial decision that figures to be debated for years.

On a sloppy track under the Twin Spires, Maximum Security set the fractions and finished in a final time of 2:03.93. But in coming off the turn the colt drifted a bit wide and was later ruled to have impeded his rivals, nearly causing horses like War of Will and Long Range Toddy to clip heels.

Flavien Prat, the jockey aboard Country House, lodged an objection, which led to Country House's placing to first and a Derby score for Hall of Famer Bill Mott.

Code of Honor was second, Tacitus third and Improbable fourth.

"I don't think it affected the outcome of the race," Jason Servis, who trains Maximum Security, said.

“I don’t really like to win this way," Mott said. "I wish it was clean. I wish we pulled away and won by five and didn’t have anything happening.”

But before the call was made, Mott also said: "If it was a maiden claimer on a weekday, the winner would come down, and it’s not supposed to matter — Kentucky Derby or whatever it is. There’s a couple of riders that nearly clipped heels and went down in there.”

Barbara Borden, chief steward in Kentucky, issued a statement to reporters on what was a unanimous decision from a group of three.

"The riders of the 18 (Long Range Toddy) and 20 (Country House) horses in the Kentucky Derby lodged objections against the 7 (Maximum Security) horse, the winner, due to interference turning for home, leaving the 1/4 pole.

"We had a lengthy review of the race. We interviewed affected riders. We determined that the 7 horse drifted out and impacted the progress of Number 1 (War of Will), in turn, interfering with the 18 and 21 (Bodexpress).  Those horses were all affected, we thought, by the interference.

"Therefore, we unanimously determined to disqualify Number 7 and place him behind the 18, the 18 being the lowest-placed horse that he bothered, which is our typical procedure."

This marked the first time in Kentucky Derby history -- mind you, this was the 145th running -- that the winner was placed first because of action on the racetrack. The closest comparison can be drawn to Dancer's Image, the original 1968 winner later disqualified upon failing a post-race test.

A son of Lookin At Lucky, Country House broke his maiden Jan. 17 at Gulfstream Park, ran second in Fair Grounds' Risen Star (G2) and then became the only horse to hit the board in two major preps this year, running fourth in the Louisiana Derby (G2) and third in the Arkansas Derby (G1).

We'll be talking this for years. Your thoughts?