From Stilleto Boy to Hozier: These 6 winners are sold 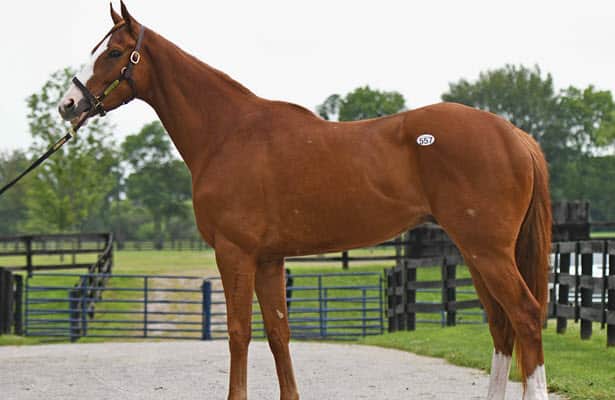 Stilleto Boy, winner of the Iowa Derby at Prairie Meadows on July 2 was sold for $420,000 at Monday’s Fasig-Tipton sale for horses of racing age at Lexington, Ky.

The Shackleford gelding, a John and Iveta Kerby homebred, was sold to Steve Moger.

Before the Iowa Derby, Stilleto Boy, who has been trained by Doug Anderson, had finished fourth in the Prairie Mile Stakes. He broke his maiden at Oaklawn in April.

Another recent winner at Prairie Meadows, Josie, was also sold Monday. The winner of the Iowa Distaff, a 4-year-old daughter by Race Day, was sold to Katierich Farms for $300,000.

The horse who fetched the highest price at the sale was Front Run the Fed, going for $440,000 to George Sharp. The 5-year-old son of Fed Biz finished third in the Poker (G3) last out at Belmont Park on June 20. He has one career stakes win, which came in the black type Better Talk Now at Saratoga in 2019.

Trainer Rodolphe Brisset, acting as an agent for Ted and Mary Nixon, purchased Hozier for $200,000. Brisset has trained the Pioneerof the Nile colt his last two races, including a win in a July 4 allowance race at Ellis Park.

When he was trained by Bob Baffert, Hozier finished second in both the Rebel Stakes (G2) and the Sir Barton Stakes at Pimlico and crossed sixth in the Arkansas Derby (G1).

Attachment Rate, 14th in the 2020 Kentucky Derby, was sold to William S. Sparks for $160,000. The Hard Spun colt was owned by Jim Bakke and Gerald Isbister.

Prior to the Derby, Attachment Rate finished second in the Ellis Park Derby and fifth in the Blue Grass Stakes (G2). Most recently he finished third in a Churchill Downs allowance race on June 4.

Fearless, winner of the Gulfstream Park Mile (G2) in February, sold for $205,000 to West Bloodstock, acting as an agent for Mike Repole. Previously owned by China Horse Club and WinStar Farm, the 5-year-old Ghostzapper gelding was entered in the 2020 Fasig-Tipton horses-of-racing-age sale, but the reserve was not met.

Fearless finished third in his most recent trip, the Pimlico Special (G3). He also came in second in the Oaklawn Handicap (G2) in April.