From Luxembourg to Luscious: Book closes on Arlington 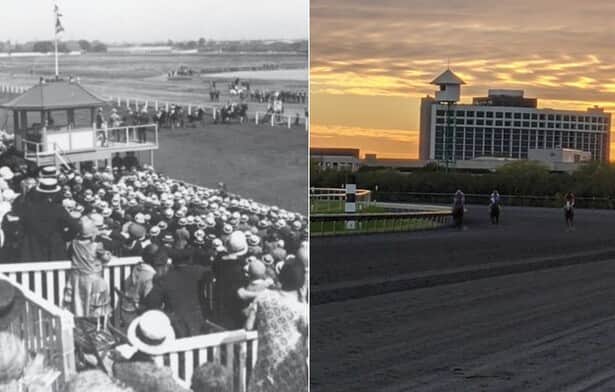 Let the record show that the last race on the last day of the last season at Arlington Park was won Saturday at 6:18 p.m. CDT by a 5-year-old mare named Sister Ruler. She was a $20,000 claim two months ago who made trainer Michele Boyce, jockey Constantino Roman and owner Hoffman Farms the last triumphant connections at the 94-year-old racetrack.

Let the record also show that on a sunny, comfortably breezy day filled with forced smiles, farewell tunes and melancholy emotion, one horse had to be the bookend.

If Luxembourg was the first horse across the finish line on opening day in 1927, there had to be a last horse under the wire on closing day in 2021. That horse was Luscious, a 4-year-old filly who had won her last start before Saturday. She went off at 10-1, faded in the stretch and finished 11 1/2 lengths up the track, 12th of the 12 starters in a 5 1/2-furlong turf allowance for fillies and mares.

“We would have wanted a better result,” her trainer Chris Banks said. “But to be a part of the last race, … it’s just that this is such a beautiful place, and it’s a shame it’s come to this.”

The “this” to which Banks referred was the announced intention of Churchill Downs Inc. to sell Arlington Park to a buyer who will not run races on its 326 acres.

Banks, 39, has reason to be especially frustrated about Arlington’s fate. He is a local guy from Cicero, right by Hawthorne Park, which is now the only active Thoroughbred track in northern Illinois.

Jockey E.T. Baird, 54, who rode Luscious and has also ridden 2,475 winners in his 36-year career, is himself a Chicago native. He is not convinced Arlington has hosted its last race.

“It’s never over until it’s over,” he said. “There are higher powers that I don’t know about. That’s not my business. It’s my business to ride horses, and I like doing it in Chicago.”

It was fitting that a pair of Chicago connections were responsible for the last of the thousands of horses to have finished a race at Arlington. Where Banks, Baird and Luscious were the last, Joe Bollero, Frank Rector and Luxembourg were the first.

Bollero was just 16 when he rode to victory for Rector, a local trainer, in that first, six-furlong race. After that triumphant premiere in front of 20,000 people on a cold Oct. 13 afternoon in 1927, Bollero would in time become a fixture at Arlington. He transitioned from jockey to trainer, working at the track for more than six decades until his death in 1991.

Banks has also had a multi-faceted professional history around Chicago going back to the very first time he trained a horse at Arlington three years ago.

“I was actually third with a filly that I had claimed that first year I started training Thoroughbreds,” he said. “I had come from a harness background. I had a horse, Sperling, that was my first winner here. I raced later that night at Hawthorne and won with a standardbred. It was the first time that it was ever done as a dual-license trainer to win with a Thoroughbred in the daytime and then win at night with a standardbred at Hawthorne.”

Baird's best score at this track might have been on Just as Well in the 2009 Arlington Handicap (G3). His highest-profile race was the 2008 Kentucky Derby, finishing fifth aboard Recapturetheglory. That was a colt he rode to the winner’s circle that spring in the Illinois Derby (G2).

Hawthorne was the site of that triumph 13 years ago, and it may be where Baird does a good deal of his work in the coming months and years. Not that he is thinking about it just yet.

“I don’t look that far ahead,” he said. “Today you always think about how this was maybe the last time I’ll ever be here. But in the long run, it’s another day of racing, regardless of where you’re at or where you’re riding. It’s your job, and you just do it.”

Baird was reluctant to fall into the maw of ambivalent feelings that were on display with thousands of people Saturday. The smiles were labored, and the faces were long. Banks was a perfect example.

“Kind of a somber day,” he said. “You’re happy that you’re running, and as competitive as we are, we’re always excited to run. It was just an odd feeling today.”

Since he is steeped in Chicago racing, Banks has seen it before.

“I grew up right down the block from Sportsman’s Park and Hawthorne,” he said. “When I was racing harness horses, I was based out in Melrose Park at Maywood Park, which isn’t there anymore. I’ve seen Maywood Park and Balmoral close. Sportsman’s Park, that’s a big one that we miss. But with every end there’s a new beginning. We’ll figure something out and keep going.”

As Baird said, it is anyone’s guess what that next something may be.

“We can never predict the future,” he said. “If you could, you’d be a trillionaire, right? You’d own the world.”