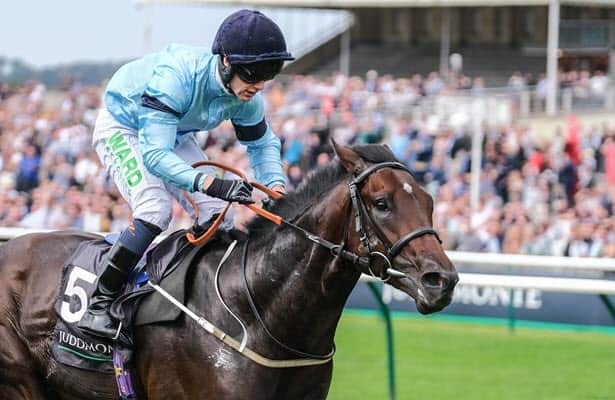 The Breeders’ Cup Challenge Series is an international series of 84 stakes races whose winners receive automatic starting positions and fees paid into a corresponding race of the Breeders’ Cup World Championships, which will be held at Del Mar racetrack in Del Mar, California on Nov. 5-6.

A son of Wootton Bassett out of the Dalakhani mare Shaloushka, Royal Patronage reeled in joint favorite Coroebus (IRE) in the shadows of the post to win the Royal Lodge Stakes by a neck.

Royal Patronage reigns in the #WinAndYoureIN Juddmonte Royal Lodge Stakes and punches his ticket to the #BreedersCup Juvenile Turf! ?? #FutureStarsFriday

Congrats to the connections! @Johnston_Racingpic.twitter.com/jHyRs3taDi

Trained by Mark Johnston and ridden by Jason Hart, Royal Patronage raced prominently in the early stages in the seven-horse field. Godolphin’s Coroebus (IRE) took up the running at halfway and surged clear from the field under William Buick, before being run down and headed on the line by the eventual winner. The Donnacha O’Brien-trained Unconquerable (IRE), the 33-1 outsider of the field, finished 2 1/2 lengths back in the third. Joint favorite Masekela (IRE) finished fourth.

Celebrating his fourth Juddmonte Royal Lodge Stakes victory, Johnston was delighted with the performance of his 2-year-old colt.

“I thought we were going to finish second even well inside the final furlong,” said Johnston. “At that stage I was happy. He was running away from the chasing pack and I was thinking he's going to be a lovely horse for stepping up in trip next year. Jason [Hart] said the moment he hit the rising ground he was just gaining with every stride. He won well in the end.”

No immediate plans have been made for the exciting juvenile, but a tilt at next year’s Epsom Derby (G1) is under consideration.

Johnston added: "He looks like a Derby horse. It's great when you've got a horse who you're thinking might stay a mile and a half, but is showing so much speed early on as well. That's ideal."

Royal Patronage (7/2) finished the 1 mile in 1:38:06 over a course listed as good to firm. It was his third consecutive win after breaking his maiden in a novice stakes at Epsom on July 29, and capturing the 7-furlong Tattersalls Acomb Stakes (G3) at York on Aug. 18 in his previous start.

As part of the benefits of the Challenge Series, the Breeders’ Cup will pay the entry fees for Royal Patronage to start in the Breeders’ Cup Juvenile Turf, which will be run at 1 mile over the Del Mar turf course. Breeders’ Cup also will provide a travel allowance of $40,000 for all starters based outside of North America to compete in the World Championships.