Free as a Bird Ready for Unbridled Sidney 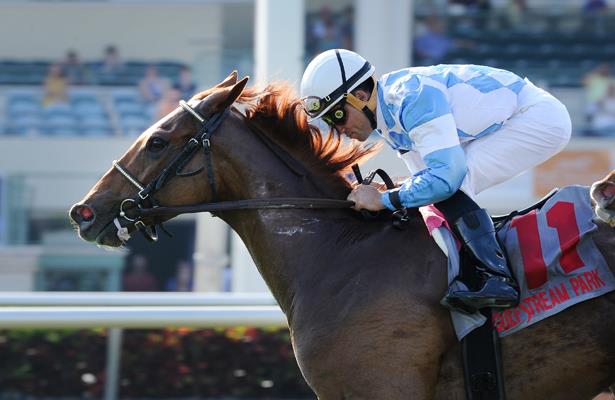 In her most recent start, the daughter of Hard Spun ran fourth in the Giant’s Causeway at Keeneland that put an end to her six-race winning streak. She worked a bullet last Saturday over the main track at Churchill Downs breezing four furlongs in 46.80.

Trainer Ian Wilkes says that his mare is coming into Saturday’s race in good order and that he believes her last race may have come up a little too quickly.

“She’s doing good,” Wilkes said. “The race before probably took a little too much out of her and I think I may have ran her back too quickly. Hindsight is easy; I’m a genius after the race. I probably should have waited, skipped that race (at Keeneland) and waited until the next one.”
Before losing last time out, Free as a Bird made her 2015 debut in the Captiva Island Handicap at Gulfstream Park in March. She will be facing a field of nine other fillies and mares, including four opponents from her most recent outing. Katie’s Eyes, Fioretti, Gal About Town and Richies Party Girl who ran against Free as a Bird in the Giant’s Causeway, also are entered in Saturday’s five-furlong test on the Matt Winn Turf Course.
Wilkes is planning on sending two horses to Pimlico to race Preakness Stakes weekend, which will feature 14 other stakes races outside of the middle jewel of the Triple Crown.

Randal L. Bloch, Phil Milner and Six Column LLC’s homebred gelding Senor Grits is scheduled to compete in the Chick Lang on the Preakness undercard, and his filly Sweetgrass will make her stakes debut in the Black-Eyed Susan (GII) the day before.

Last time out, Senor Grits, a son of Elusive Quality, ran a close second behind Bill and Corinne Heiligbrodt’s Cinco Charlie in the William Walker Stakes on Opening Night. Wilkes expects the horse to run a big race next Saturday.
“He’s a very talented colt, I expected him to run good,” Wilkes said. “He’s actually improved and gotten better and better with more races and he’s had six starts.”
In four starts, Sweetgrass never has made a start against stakes company, but will see her first start against such competition in the Black-Eyed Susan, the feature race run the day before the Preakness. Wilkes says that he is very pleased with how the daughter of 2007 Kentucky Derby winner Street Sense has been doing and that he thinks she will do well stretching out. Last time out, she won an allowance race at Keeneland going seven furlongs.
“The race would be a good test for her, and I think she wants to go long,” he said. “I think that it is a good spot for her. I want to see if she belongs with the good horses because it will be a step up. The Black-Eyed Susan will be no pushover. It’s going to be a tough race.”
AFTER HUGE DERBY WEEKEND, TEAM CASSE LOOKS TOWARD BIG SUMMER
Team Casse enjoyed a successful Kentucky Derby weekend with their stakes horses, headlined by Tepin who scored a victory in the Churchill Distaff Turf Mile (GII).

The Casse stable also ran second with Noble Bird in the Alysheba (GII) and was beaten a nose in the Woodford Reserve Turf Classic (GI) with Sky Captain, who was then disqualified to fourth because of interference in the stretch.

Norman Casse, who oversees his father Mark Casse’s string of horses at Churchill Downs, says that he is looking to send the trio of horses to Belmont Park to compete on the Belmont Stakes undercard.

Tepin, who beat a loaded field in the Churchill Distaff Turf Mile that included seven graded stakes winners, possibly will make her next start in the Just A Game (GI) on the Belmont Stakes undercard.

“We’ve really had an eye on her from Day One so it’s really rewarding for her to run that way on Derby Day,” Casse said. “We’ll look at possibly running her on Belmont day.”
The daughter of Bernstein is a graded stakes winner on two surfaces. As a 2-year-old, she won the Delta Downs Princess (GIII) on dirt.
Casse also spoke highly of Sky Capitan who suffered a tough loss losing a photo finish in the Woodford Reserve to Finnegans Wake.
“I think he showed that he belongs with Grade I horses across the country so we’ll probably look at the Manhattan for him next,” he said.
John Oxley’s Noble Bird, beaten just a head by Protonico in the Alysheba, is possible for the Met Mile on the Belmont Stakes undercard. Casse said that the Stephen Foster (GI) run at Churchill Downs June 13 also is an option for the son of Birdstone.
“This is exciting for us because we have a lot of good older horses this year,” Casse said.
BARN TALK – Nominations close Saturday for two Memorial Day weekend stakes – the $100,000 Louisville Handicap (GIII) on May 23 and the $100,000 Winning Colors (GIII) on May 25. The Louisville Handicap is for older horses going 1 ½ miles on the Matt Winn Turf Course and the Winning Colors, named for the 1988 Kentucky Derby winner, is for fillies and mares going six furlongs on the main track.
Source: Churchill Downs
Sweetgrass Noble Bird Tepin Free as a Bird Sky Captain Senor Grits Ian R. Wilkes Mark E. Casse Churchill Downs Unbridled Sidney