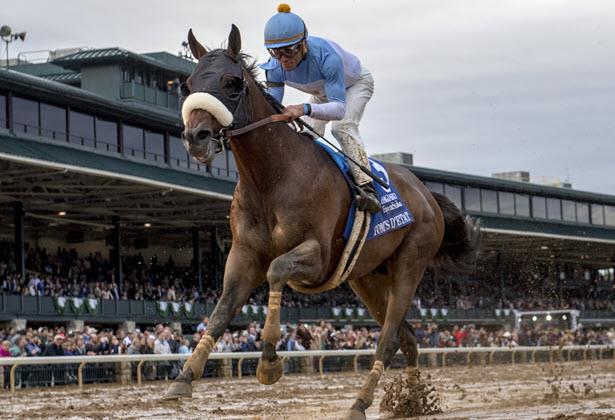 Tom's d'Etat will look to run his impressive winning streak to five in a row when he takes on four other challengers in a small, but talented Whitney Stakes (G1) field at Saratoga on Saturday.

Drawn in the comfortable outside post, the 7-year-old by Smart Strike could go off even lower than his 6-5 morning line.

While there is little value betting the logical horse to win in here, a quick look at the free past performances from our friends at Brisnet helps clear up a muddled picture for the exotics.


Though he was no match for the favorite that day, everyone could be running for second again in this spot and the improving 4-year-old should absolutely be right there.

Improbable checks in next in the Prime Power Rankings by a narrow margin, but Code of Honor could be stronger overall.

Improbable parlayed a perfect trip against a weak field to stretch his distance limitations to a mile and a quarter last time in the Hollywood Gold Cup, but many feel he is still at his best at shorter distances.

Code of Honor meanwhile, thrives at longer distances and is 2 for 2 at Saratoga.

Mr. Buff is likely go to the lead with Improbable and Tom's d'Etat tracking him. Once Tom's d'Etat puts those two away, By My Standards and Code of Honor, two runners with excellent late pace, could pick up the pieces for second and third.