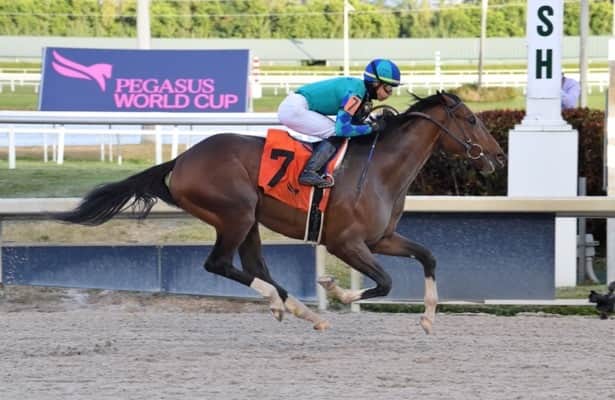 The John Battaglia Memorial on the Tapeta at Turfway Park is the first prep of the weekend, going off Friday night. The race offers points allocations of 10-4-2-1.

The Battaglia is headlined by Gretzky the Great. Trained by Mark Casse, the colt will use the race as his 3-year-old bow, as well as his second race on a synthetic track after spending his juvenile year on turf.

Gretzky the Great will be joined by Twirling Mamba, coming off an impressive allowance win going six furlongs at Turfway. The 1 1/16-mile Battaglia will be the first trip longer than seven furlongs for the colt.

Like the King rounds out the top three in the Prime Power rankings for the Battaglia. Free past performances for the race can be found here from our friends at Brisnet.

In Florida, Saturday's Fountain of Youth (G2) at Gulfstream Park will offer 50-20-10-5 to the top four finishers, the highest points payout of the day.

The race features a number of contenders who ran in Gulfstream’s previous Derby prep race, the Holy Bull (G3). This includes Greatest Honour, who has looked impressive in both of his races at the track and earned the victory in the Holy Bull.

He will be joined in the Fountain of Youth by the rest of the top four in that race, including Prime Factor, with Drain the Clock, winner of the Swale (G3) in his most recent trip. Swale second-place finisher King’s Ovation will also run.

Fire At Will, winner of the Breeders’ Cup Juvenile Turf, will make his 3-year-old debut in the Fountain of Youth for trainer Mike Maker.

Free PPs are available here from our friends at Brisnet.

Finally, the Southwest Stakes (G3) at Oaklawn is another 10-4-2-1 points race. It has been postponed multiple times because of severe winter weather impacting Arkansas.

The Southwest will be the 3-year-old bow for 2-year-old champion Essential Quality. Trained by Brad Cox, the Tapit colt won the Breeders’ Cup Juvenile in his most recent trip on Nov. 6.

Another runner in the Breeders’ Cup Juvenile, Jackie’s Warrior, who finished fourth in that race, also will make his first trip of 2021. The Maclean’s Music colt, trained by Steve Asmussen, has three stakes victories, including the Champagne (G1), Hopeful (G1) and Saratoga Special (G2).

Free Brisnet PPs for the Southwest are now available here. For more data, visit our Past Performances page.