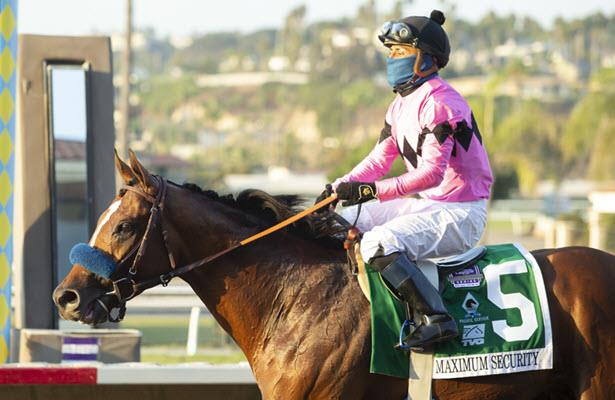 Maximum Security has traveled around the world in his storied career, but he only needs to look down the shedrow for his biggest competition in Saturday's key Breeders' Cup Classic prep, the Awesome Again Stakes at Santa Anita Park.

The champion will be challenged by Bob Baffert's Improbable, who enters the Awesome Again in the form of his life after back-to-back Grade 1 wins in the Gold Cup and Whitney.

Though the Awesome Again came up light in number of horses with only five entrants, it is heavy on talent. In addition to Baffert's star duo, romping Charles Town Classic winner Sleepy Eyes Todd ships in to add intrigue to the field.

With three horses coming off impressive wins and Midcourt shortening up to a distance that better suits him, this race could be more wide-open than it first appears. Let us take a deeper look into the contenders for this race by viewing free past performances from our friends at Brisnet.

Race riding could easily determine the outcome of this race. In a race where styles are jumbled, the speed of the speed is often tough to beat.

By looking at Brisnet's Speed Last Race Ratings, we see that Maximum Security should be able to make the lead if he would like from his outside post. Take the One O One has a low speed rating mainly because he is outclassed and has been setting fractions at one mile, but he could be sent hard from the rail as the outsider in the field. If that is the case, then Maximum Security figures to track from second.

Anyway you slice it, Maximum Security seems ensured a great trip, while the remaining trio of contenders could be left in no man's land.

If Maximum Security opens up two lengths turning for home with either trip then this race is likely over, but what happens if the field is bunched? Will Maximum Security be able to outkick everyone like he did in the Saudi Cup?

Based on his last race, Brisnet says no. Improbable            dominates his foes in the Late Pace category and Sleepy    Eyes Todd comes in well ahead of Maximum Security for    second.

Brisnet does not seem convinced that Maximum Security has been beating much since switching to the Baffert barn and feels the 'new faces' are not far behind. Luis Saez, who may be the best speed jockey in the country, needs to ride Maximum Security aggressively to win this race. If they turn it into a sprint for home, the champ is vulnerable.

Value is tough to come by in this race, but betting Sleepy Eyes Todd to split the Baffert duo in trifectas seems like the most practical way to make a small profit.

Take a closer look at the Awesome Again Stakes PPs below, with the option to go full screen in the lower right corner of the window. Visit our free past performances page to view free stakes PPs all weekend from Santa Anita and Churchill Downs.