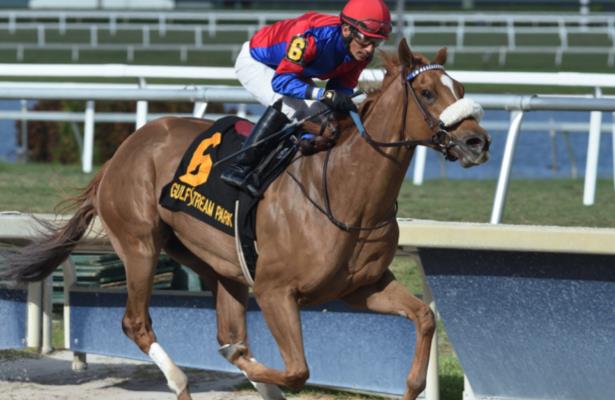 Only in this unique year could the mile and one quarter Grade 1 Alabama Stakes be used as a prep for the mile and one eighth Grade 1 Kentucky Oaks, but that is the case on Saturday at Saratoga as seven fillies line up, led by even money favorite Swiss Skydiver.

The Kenny McPeek trained filly was recently second against Art Collector and the boys in the Blue Grass Stakes and prior to that was victorious in the Gulfstream Park Oaks, Fantasy Stakes and Santa Anita Oaks in her previous three races.

By using free past performances from our friends at Brisnet, it is not hard to tell that Swiss Skydiver is a standout in this race.

It is typical for a horse to have a 1 to 4 point advantage over their next closest rival in Brisnet's Prime Power Rankings, but Swiss Skydiver has an enormous 10 point edge.

Considering that Bonny South and Harvey's Lil Goil are the only other stakes winners in this field, Swiss Skydiver's large edge is not surprising. It is safe to say class will not get Swiss Skydive beat in this race, but will the distance test of a mile and a quarter end up being an equalizer?

Nobody truly knows as none of these fillies have been this distance before, but those trying to beat the heavy favorite will be hoping for possible distance limitations for Swiss Skydiver.

It is important to note that all three of Swiss Skydiver's stakes wins have come at 1 1/16 miles. She faded in the stretch when trying the 1 1/8 miles Blue Grass, but that could have been due to facing better competition.

If Swiss Skydiver falters in the final furlong, who is the best bet to run her down?

For that we look towards the Late Pace Last Race section of the Brisnet Pps.

Spice is Nice has a surprisingly massive edge in this category. The Curlin filly is bred to run all day and should move up more than any of her rivals at this distance. Todd Pletcher's million dollar filly is coming off a sharp Allowance win and has enough tactical speed to sit close to Swiss Skydiver.

Spice is Nice looks like the filly most likely of pulling the upset. She likely should be included in all vertical and horizontal wagers with Swiss Skydiver.

Take a closer look at the Alabama PPs below, with the option to go full screen in the lower right corner of the window. Visit our free past performances page for more great, free Saratoga coverage on a fantastic day of racing.