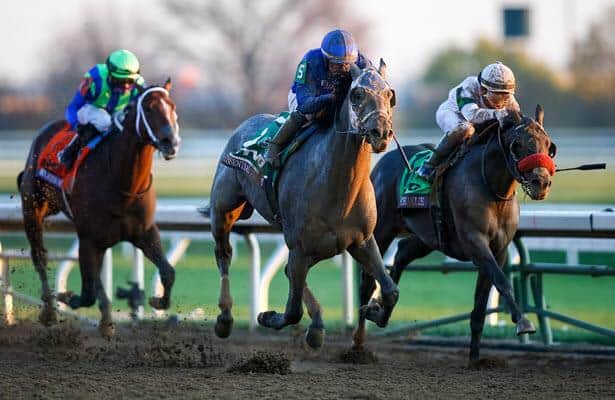 If Breeders’ Cup Juvenile runner-up Hot Rod Charlie should advance to win the 2021 Kentucky Derby, the fabled Run for the Roses might never be viewed quite the same way.

While sheikhs join corporate kings and queens in chasing racing’s grandest prize, an entity known as Boat Racing LLC is attempting to crash the party as a 25 percent owner of Hot Rod Charlie.

Exactly who are these guys? Racing’s blue bloods might shudder upon finding out.

Patrick O’Neill, a 2015 Brown graduate who now serves as vice president for sales and strategic partnerships at Founder Sport Group, leads the newbie ownership entity. He surely belongs as the nephew of Doug O’Neill, who trained Derby winners I’ll Have Another (2012) and Nyquist (2016).

As a group, though, the five members of Boat Racing know far more about football than horse racing since they all represented Brown on the gridiron. Eric Armagost, Dan Giovachinni, Reiley Higgins and Alex Quoyeser are still learning to distinguish between manes and tails. Quoyeser, for instance, referred to the prestigious Juvenile as the “Juvenile Classic.”

As for the name they chose for their partnership, it stems from a beer-chugging game they played (apparently often) as Theta Delta Chi frat brothers. Perhaps O’Neill has some explaining to do.

“We tried to think of something that unified us,” he said. “Honestly, all we could think of — it’s not the most mature name we could come up with — was Boat Racing.”

What were Roadrunner Racing’s Greg Helm (50 percent) and William Strauss of Strauss Brothers Racing (25 percent) thinking when they partnered with Boat Racing on Hot Rod Charlie?

They probably never imagined they would have such a blast.

“It can be great fun,” Doug O’Neill said. “We need the younger generation to jump on board with this great sport.”

It matters little that Patrick’s frat brothers barely know more than the information they gleaned while he balanced TVG with his undergraduate studies. They are successful, young businessmen who remain eager to find a reason — almost any reason — to come together as great friends in search of more good times.

Hot Rod Charlie is Boat Racing’s third horse after the first two were claimed. He was purchased for $110,000 by Dennis O’Neill, another of Patrick’s uncles who has one of the sharpest eyes for talent in the business. Dennis is renowned for purchasing 2012 Kentucky Derby winner I’ll Have Another for $35,000 as a yearling.

There was nothing hot about Hot Rod Charlie in the early going. The dark bay son of 2013 Preakness winner Oxbow needed four starts to break his maiden. That victory, after blinkers were added and he was stretched out to a one-mile dirt race on Oct. 2 at Santa Anita, landed him on the also-eligible list for the Juvenile.

Quoyeser described it as a “pity invite, almost.”

Hot Rod Charlie made the field when trainer Dale Romans decided against running Smiley Sobotka, one of several top 2-year-olds in his barn. The Boat Racing gang was so filled with youthful optimism that they were not at all discouraged as the odds climbed on their horse in the minutes leading to the Juvenile.

“We were all kind of looking at each other and saying, ‘Why not us?’ ” recalled Quoyeser.

Well, veteran owners might have explained the massive improbability of having a Derby prospect with the third horse the group ever owned. They might have explained that a maiden winner such as Hot Rod Charlie, dissed at 94-1, is expected to assume a position at the back of the pack and stay there when facing far more accomplished runners.

“He obviously wasn’t getting a ton of respect from the smart money coming in at the end,” Quoyeser said.

They learned that smart money is not always smart. Hot Rod Charlie, after assuming a great striking position, provided a thrill in the $2 million Juvenile that will last a lifetime.

“We took the lead on the turn and we were going nuts,” Patrick said.

Although Essential Quality swept past to win by three-quarters of a length, it almost did not seem to matter.

“It was one of the best moments in my life,” Patrick said. “A lot of them said it was a top five moment in their life.”

Hot Rod Charlie was given two weeks off from training. He is expected to gradually ramp up preparations for his 3-year-old campaign with the Jan. 30 Robert B. Lewis at Santa Anita as a likely first target.

“Like every athlete, we’ve got to keep him injury-free,” Doug O’Neill said. “He’s got all the tools to run with the big boys and have a chance to do some special things.”

And if Hot Rod Charlie should reach the Derby? It would be safe to assume that a beer or two or three would be downed.