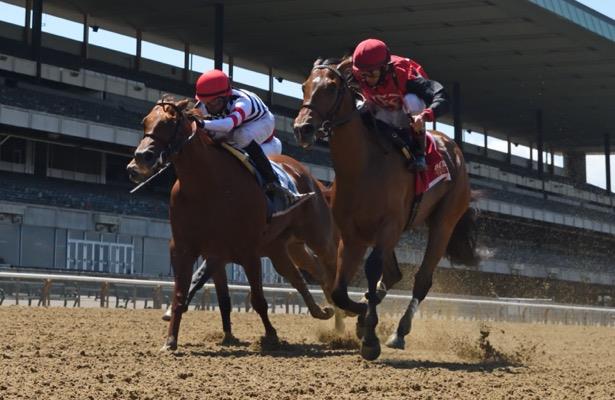 Frank’s Rockette rocketed to a graded stakes breakthrough and nearly a track record Saturday at Belmont Park in the Grade 3, $100,000 Victory Ride Stakes.

The Into Mischief filly, three times a runner-up in graded stakes last year as a 2-year-old, went off Saturday a 2-5 favorite. She faced only four rivals in the Victory Ride, a 6½-furlong dirt sprint for 3-year-old fillies.

Frank’s Rockette broke sharply from the inside post under jockey John Velazquez. She rode the rail through fractions of :23.11 and :45.52 while Reagan’s Edge and Center Aisle sat just outside of her.

Coming for home, Frank’s Rockette maintained a narrow lead. Reagan’s Edge inched closer to the favorite as the top trio neared the wire, but Frank's Rockette held on to prevail by a head.

"She broke well enough, but not as quick as I thought she would," Velazquez said of Frank's Rockette. "Little by little, she got into the battle and I let her do what she wanted to do. At the end, she put in a really good fight. At the wire, I thought I had it. But right before the wire, I wasn't sure we were going to hold on."

#1 Frank’s Rockette (2/5) holds on to win the Victory Ride (G3) with @ljlmvel up for Bill Mott pic.twitter.com/D8wfMbv8jP

Frank’s Rockette returned $2.90 and covered the distance in 1:14.47 – just .01 seconds off the track record Bear Fan set in 2004. Behind the winner and runner-up Reagan’s Edge, Center Aisle finished third.

Hall of Famer Bill Mott conditions Frank’s Rockette, a homebred for owner Frank Fletcher. The Into Mischief filly is 2-for-3 this season and entered off an allowance optional claiming win May 25 at Churchill Downs.

"When you looked at the race on paper, it looked like we'd be the clear speed and probably be a length or two in front on the backside," Mott said. "There was a horse hanging right with her.

"She didn't break quite as sharp as I've seen her in the past, but she was able to open up a bit when she turned for home and had enough courage to hold them off," Mott continued. "She had to work at it a little bit. It was not an easy win."

As for the game runner-up effort from Reagan's Edge, trainer Cherie DeVaux was pleased with the near-miss.

"She's just got a lot of fight in her. It's so nice to have a horse like this in the barn that goes out and just tries every time we ask her," DeVaux said.

"That's what I've had my eyes on," Mott said. "It's a big challenge. The Test is a great race. We've won it a couple of times and it's a very important race for 3-year-old fillies. If she's doing well, I'd like to give her a try in there."