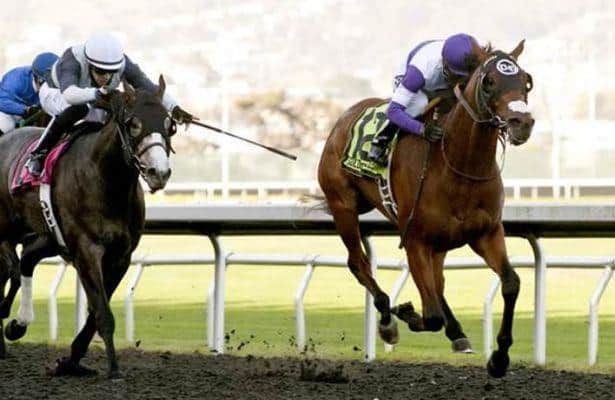 Favored Frank Conversation claimed the lead in upper stretch and held off a bid from long shot Tusk to win the Grade III, $200,000 El Camino Real Derby on Saturday at Golden Gate Fields.

Favored at 8-5 off an impressive win in the California Derby on Jan. 16 at Golden Gate, Frank Conversation left from post position 11 and was kept in the clear by jockey Mario Gutierrez as he raced in sixth through fractions of 23.73, 48.37, and 1:13.15 in the 1 1/8-mile race. After commencing his rally inside the three-eighths pole, Frank Conversation forged to the front turning for home and was kept to task by Gutierrez as Tusk pursued gamely.

“It was a perfect trip,” Gutierrez said. “It was a lot of horses, so I wouldn’t say we were worried, but we definitely wanted to get the perfect position right away coming out of the gate. It worked really good for us. The horses went to the lead and I was able to just lay down behind the speed like the last time. There were more horses today [than in the California Derby], but it was kind of the same trip. He’ll definitely stretch out because the competition was a little bit harder today, but he definitely kicked on and he never hesitated to keep pushing until the wire.”

Frank Conversation completed the distance in 1:50.64 and returned $5.20 for a $2 win bet. He earned 10 points in the “Road to the Kentucky Derby” series and became the fourth horse to sweep the California Derby and El Camino Real Derby, following the Jerry Hollendorfer trio of Cause to Believe (2006), Bwana Bull (2007) and Chocolate Candy (2009).

Doug O’Neill trains Frank Conversation for Paul and Zillah Reddam of Reddam Racing LLC. Gutierrez, O’Neill and the Reddams combined to win the 2012 Kentucky Derby and Preakness with I’ll Have Another and campaign 2015 Champion Two-Year-Old Nyquist, who will make his 3-year-old debut on Monday at Santa Anita in the Grade ll San Vicente.

“Watching him train on dirt, it looks like he's not only a synthetic and turf horse,” O’Neill said. “He and Nyquist haven't worked together; they're both so professional that they do everything we ask working alone. His race at Los Alamitos [a fifth-place finish in the Grade l Los Alamitos Futurity] wasn't that bad. Obviously his style is to sit and pounce but speed was doing well that day and we told Mario to go for the lead. The buildup [to the Kentucky Derby] is almost as exciting as the actual event. When you have a good horse and you keep him injury-free and watch him train every day, there's no better feeling.”

O’Neill said Frank Conversation could be pointed toward the Grade lll, $500,000 Spiral on April 2 at Turfway Park.

“It does look like synthetic or turf is his thing, but we'll definitely try a big race on dirt soon,” O’Neill said. “The race at Turfway Park [the Grade lll, $500,000 Spiral Stakes on April 2] is something we'd look at first because it is on synthetic. That was a big-time performance today. We were concerned about the 11-hole but Mario did a very good job of getting him into position so he was just four-wide.”

In addition to the runner-up Tusk, H. Graham Motion sent out Kasseopia, who rallied for third despite a tardy start.

“Tusk ran a huge race,” said Alice Clapham, assistant to Motion. “We’re really happy with him. Kasseopia ran a good race. Unfortunately, he walked out of the gate and kind of lost all chance of winning. He needs a bit of work and he’ll be good to go.”