Frac Daddy a go for the 2013 Belmont Stakes 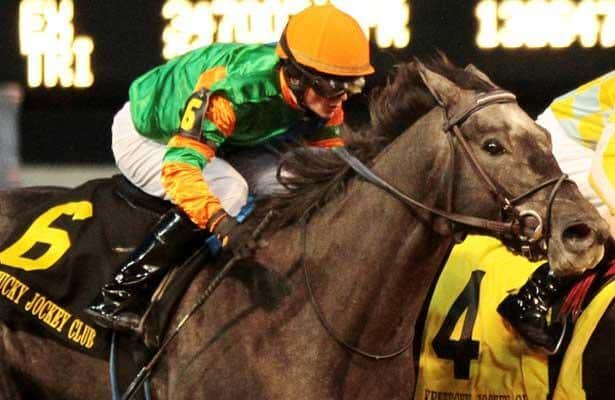 McPeek said the Scat Daddy colt will fly to New York from Kentucky tomorrow and be ridden in the third leg of the Triple Crown by Alan Garcia.

“Talking to Carter Stewart, the principal partner for Magic City, he’s game, you know?” McPeek said. “We still believe this is a really, really good horse, but for whatever reason it hasn’t happened for him. Sometimes you throw deep and it goes incomplete, but you can’t score if you don’t throw. [Stewart] is the ideal client to throw deep and we won the Travers for him last year [with dead-heat winner Golden Ticket].”

Frac Daddy, who descends from the same female family as 1997 Delaware Handicap winner Power Play, has one win in seven career starts. He broke his maiden in his second start last November at Churchill Downs and then finished second in the Grade 2 Kentucky Jockey Club.

This year, he disappointed McPeek with a sixth-place finish in the Grade 3 Holy Bull at Gulfstream Park, and then was three wide on the far turn when seventh behind Orb in the Florida Derby. Frac Daddy ran in the Kentucky Derby and finished 16th.

“I do believe the horse will run well,” McPeek said of the plan to go in the Belmont. “I think the pace in the Belmont will suit him well, too. He drew outside in the Derby and couldn’t get position, and I don’t think he handled the slop. He’s worked on a dry track a couple times recently and worked freaky good. I think he’s got a big shot at it.”