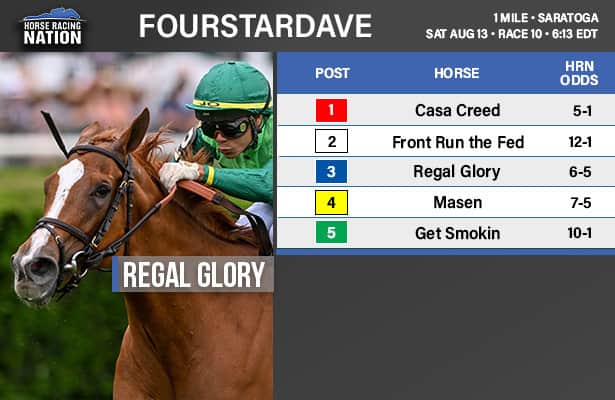 The Fourstardave Handicap at Saratoga on Saturday attracted a field of four older males and one mare from the turf division. The one-mile Grade 1 offers a $500,000 purse and a “win and you’re in” spot in the Breeders’ Cup Mile.

This is another Grade 1 that has a small field but also offers quality. Three of the horses won a graded stake in their most recent starts at Belmont Park, including a pair of Grade 1s and a Grade 3. There is also a stakes winner from Colonial Downs who will ship to Saratoga.

Here is a full-field analysis for the Fourstardave, which will be run as race 10 out of 11, with morning-line odds from the Horse Racing Nation staff. Post time is scheduled for 6:13 p.m. ET.

1. Casa Creed (5-1 – Jimmy Creed – Bill Mott / Luis Saez – 26: 6-4-4 - $426,298) Casa Creed is a multiple Grade 1 winner, having taken the Jaipur the last two years at Belmont Park. This year, he ran in Dubai and Saudi Arabia in the spring and returned to win the six-furlong turf sprint in June under the guidance of trainer Bill Mott. This 6-year-old is one of the late runners in this field. The son of Jimmy Creed has a pair of Saratoga victories but only one career win going a mile, and that includes a third in the Fourstardave last summer. The millionaire earner might be pushing his distance limit in this mile. Use underneath.

2. Front Run the Fed (12-1 – Fed Biz – Calo Caramori / Irad Ortiz Jr. – 17: 5-4-2 - $495,793) Now a 6-year-old, Front Run the Fed will seek his first graded-stakes win in the Fourstardave. He won listed stakes twice in his career, including the recent Van Clief at Colonial Downs last month in a sprint. His best finish in a graded stakes came in 2020 with a neck loss in the Turf Sprint (G3) at Kentucky Downs. The son of Fed Biz is a confirmed late runner who was sixth in the Keeneland Turf Mile (G1) at the end of his 2021 campaign. Although he is a past winner at Saratoga, this race presents a significant class challenge. Toss.

3. Regal Glory (6-5 – Animal Kingdom – Chad Brown / Jose Ortiz – 19: 12-4-0 - $2,111,009) This 6-year-old mare has had a distinguished career, with 12 wins and over $2 million in earnings. She won her last four races going back to the Matriarch (G1) at Del Mar in November, with an easy recent victory in the Just A Game (G1) at Belmont in June. The daughter of Animal Kingdom has a perfect record at Saratoga in three starts. Although she prefers to race from a stalking position, she won with a deeper closing move at Gulfstream Park in the Pegasus Filly & Mare Turf (G3). Chad Brown will send Regal Glory to race against the boys for the first time. The one to beat.

4. Masen (7-5 – Kingman – Chad Brown / Flavien Prat – 9: 5-2-1 - $5,151,200) Masen began his career racing in Ireland, where he placed in a Group 3 at Leopardstown. This Juddmonte homebred moved to the barn of Chad Brown and had three starts this year. He just missed winning the Makers Mark Mile (G1) at Keeneland in April by a nose and then won the Seek Again at Belmont Park. In June, the son of Kingman won again in the Poker (G3) with another pace-pressing effort. He was a favorite in all three of his American starts and odds-on in his last two starts. Win contender.

5. Get Smokin (10-1 – Get Stormy – Mark Casse / Javier Castellano – 19: 4-5-2 - $466,900) Get Smokin is a multiple graded stakes-winning 5-year-old with front-running victories in the 2021 Tampa Bay (G3) and the 2020 Hill Prince (G2). He is winless this year after four starts, including a loss by head in the Arlington (G2) at Churchill Downs. During opening week at Saratoga, trainer Mark Casse send him out in the Forbidden Apple (G3), where he raced from off the pace, got the lead in the stretch but could not sustain the effort and finished fourth in a field of 11.  You have to assume that he will try to be in front early again. Three of his wins came at the mile distance on the turf. Use underneath.

Summary: The field for the Fourstardave Handicap is in fine form, with recent victories showing in their past performances for four of these five turf specialists.

Get Smokin and Masen get their best results when they race on the front end. Get Smokin figures to be on the lead with Masen close behind. The mare Regal Glory prefers to run from a stalking position, and Casa Creed runs from a closing position.

Regal Glory should get an ideal pace scenario and might be in the best form of her career, but she will be facing boys for the first time. Still, Regal Glory is the horse to beat in this field of five.