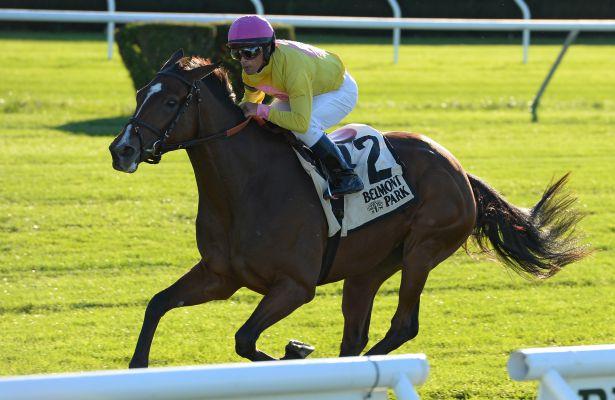 Favored Fourstar Crook pulled away from her rivals in deep stretch and went on to notch her sixth straight victory in Sunday's $125,000 John Hettinger for New York-bred turf fillies and mares at Belmont Park.

Leaving from post position 2 under Javier Castellano, the 4-year-old Freud filly settled in midpack as Invading Humor led the field of nine through an opening quarter-mile in 24.72 seconds, with the half going in 50.15 and three quarters in 1:14.35. Still surrounded rounding the far turn, Castellano positioned Fourstar Crook for a clear run on the outside straightening for home, and she responded with a solid late kick that carried her to the wire 2 ½ lengths in front of The Tea Cups.

"The way she did it today was very impressive; this was her first time going two turns and a mile and eighth," said Castellano. "I was a little concerned with the lack of pace in the race, you could see the fractions were slow, but the way she closed was very impressive."

The Hettinger was the second straight stakes win for Fourstar Crook, who in her first stakes start took the Yaddo on August 26 over a yielding course at Saratoga Race Course to continue a winning streak that began last October when she broke her maiden at fourth asking.

"[Owner] Michael Dubb and I were commenting in the paddock before the race about how much she has developed," said winning trainer Chad Brown. "When the horse was first sent to us as a 2-year-old, she was kind of a small, immature-looking horse who trained OK. She got to the races a little bit, and then we kicked her out. Thankfully Mike and all his partners were so patient. We just let the filly grow and develop over time, and man, did she fill out! She looks nothing like she did when she was younger."

"It's nice to see a horse develop like this," said Brown, who said the $200,000 Ticonderoga on Empire Showcase Day, October 22, would be a logical next sport for Fourstar Crook. "Along the way we've managed her responsibly; we've asked her to take small steps, we just didn't throw her in the deep end of the pool. She went through her conditions and now she's still with state-breds, but the way she ran today, down the road I could see this filly run in open company. She's pretty good."

Selenite finished third, three-quarters of a length behind The Tea Cups, with Old Harbor checking in fourth. Swear by It, Neck of the Moon, Invading Humor, Flipcup and Jc's Shooting Star completed the order of finish, Carameaway and Jules N Rome (MTO) were scratched.