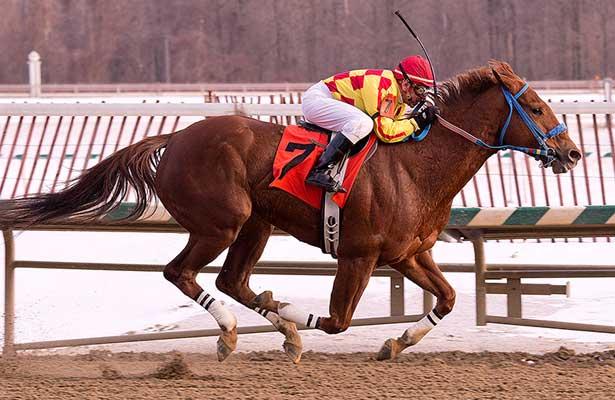 Lady Sabelia, a two-time stakes winner at Laurel, heads the cast of eight fillies and mares in the $100,000 What A Summer Stakes, race five on the program. The 5-year-old mare won four-of-five races in 2014, including the Willa On The Move Stakes on December 6. The daughter of Majestic Warrior is trained by Robin Graham and has been ridden exclusively by Horacio Karamanos since she broke her maiden in October 2013.

“She is doing great. She keeps moving forward after each race,” said Graham of the even money morning line favorite. “She has matured so much as she has gotten older. She is as honest as she can be and tries hard. Every time we take her over she is ready to do what we ask her to do.”

Defending champion Winning Image (9-2) beat Lady Sabelia in the Cornucopia Stakes at Parx Racing in October for her 10th stakes victory. Other stakes wins include the 2014 Primonetta Stakes at Pimlico and the 2012 Willa On The Move here. The ageless Tony Black, 63, has the mount.

Bakken is the 4-5 morning line choice to capture the $100,000 Fire Plug Stakes (race 6), a 6-furlong test for older horses. Chad Brown supplemented the son of Distorted Humor, who has three victories in seven starts, into the race. The 5-year-old has competed in four graded races, including a second place finish in the True North Handicap (G2) at Belmont Park and an eighth place finish in the Breeders’ Cup Sprint (G1).

Cutty Shark (4-1) and Smash and Grab (5-1) appear to be the best local hopes. Cutty Shark finished first or second in half of his 14 starts a year ago, including a runner-up finish in the City of Laurel Stakes. The son of Old Fashioned comes into the race off an allowance score on December 19 for trainer Donald Barr.

“It is a little fast back. I wish I had another week but he is on his game right now,” Barr said. “The supplemented horse makes this a tough spot. He showed flashes as a younger horse but has started putting it together on a more consistent basis as the weather got colder. The last race didn’t take too much out of him. He does his best running just off the pace and I expect that is where we will be in this race.”

Smash and Grab won three of his final four races last year, all at Laurel, for trainer Damon Dilodovico. In the $350,000 Frank J. De Francis Memorial Dash, the son of Sharp Humor stumbled at the break and finished next to last but he came back to win an allowance test last month in wire-to-wire fashion.

Miss Mischief (3-1), who won three times last year for trainer Dale Capuano after she moved into his barn during the summer, is the likely choice in the $100,000 Nellie Morse Stakes (race 7). Graham Motion has entered Star Pearl (4-1), Zucchini Flower (6-1) and Unbound (10-1).

Stormin Monarcho earned the role as the favorite in the $100,000 Native Dancer Stakes (race 8) off three stakes victories a year ago, including the Richard Small Stakes at Laurel in November. The David Jacobson trainee is the 2-1 morning line choice. Last year, Jacobson runners won 14 races from just 25 starters at Laurel. Other contenders include Turco Bravo (9-2), Cerro (5-1), Elnaawi (6-1) and Cosmic Gold (8-1).

“Perfect way to start the year,” Carrasco said. “I had some live horses in great spots for top trainers. It was fun to win on Coach Fridge because he likes to finish second (14 runner-up finishes in 34 previous starts). He always seems like he tries to get beat. We got clear today but he was able to hold on.”

The 22-year-old ranked second in the Maryland standings a year ago with 126 victories. Overall, he finished tied for 25th in North America with 188 wins and was 37th in earnings ($5.4 million).