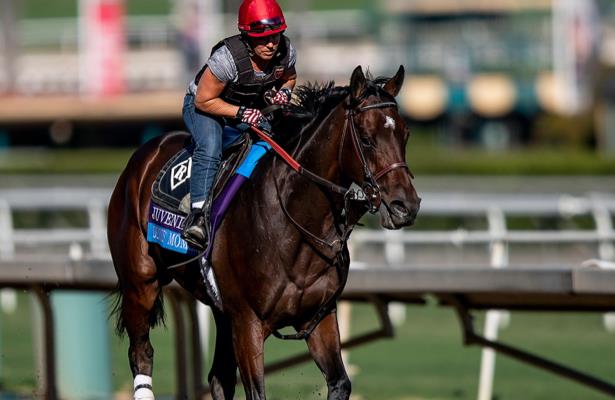 Dennis’ Moment brings all the red flags of an over-bet horse off a layoff into Saturday’s Grade 2, $400,000 Fountain of Youth Stakes at Gulfstream Park. Yet, he is the expected favorite because of the hype surrounding him as a possible monster after breaking his maiden by 19 ¼ lengths and winning last fall’s Iroquois Stakes (G3).

But in his return race, Dennis’ Moment will face a field containing runners with more recent proven talent such as Chance It, As Seen On Tv and Ete Indien. If Dennis’ Moment manages to win in this spot, he’ll have earned the hype.

The Fountain of Youth, a 50-20-10-5 points prep toward the 2020 Kentucky Derby, attracted a field of 12 with official morning line odds below.

1. Candy Tycoon, 15-1 (Twirling Candy – Todd Pletcher/Manny Franco – 5: 1-1-2): This Pletcher-trained colt always worked well last summer at Saratoga but never put it together until recently. His improved effort to break his maiden on Jan. 25 is notable, as it came over this surface at the same 1 1/16-mile distance. But he only earned a modest 103 TimeformUS Speed Figure, and this is a steep rise in class. Use underneath.

2. Makabim, 50-1 (Tapizar – Daniel Hurtak/Junior Alvarado – 7: 2-0-2): Derby fever is real. Given this closer’s only two wins came in low-level claiming races, it is hard to endorse him. He could only manage a half-length win in a $16,000 level claimer, and this is no Maximum Security. Toss.

3. Masterday, 30-1 (New Year’s Day – Gilberto Zerpa/Cristian Torres – 3: 1-1-0): His runner-up finish to Ny Traffic in a local optional claimer at least lends some credibility. But Masterday still lost by 6 ¾ lengths, and the horses surrounding him in the losing group are questionable. For example, the third-place Sounion returned to finish fourth in a five-horse Tampa Bay Downs optional claimer. While there is room for this horse to progress, the waters in this spot look too deep. Toss.

4. The Falcon, 50-1 (Union Rags – Anthony Quartarolo/Marcos Meneses – 2: 0-1-1): Once again, owner Ron Paolucci is shooting for the stars. This time he enters a closer who finished third in a Churchill Downs maiden claiming sprint and second over synthetic in a Turfway Park maiden special weight. At least the latter race came around two turns. Toss.

5. Dennis’ Moment, 2-1 (Tiznow – Dale Romans/Flavien Prat – 4: 2-0-0): The expected favorite brings many questions and concerns. Last July, he broke his maiden impressively, but the romp came at Ellis Park after setting a slow pace against a weak field. In September, he won the Iroquois after stalking the pace. However, he needed to work early in the stretch to hold off Scabbard by 1 ¾ lengths. Scabbard failed to hit the Top 3 in his next three starts, including a sixth-place finish earlier this month in the first division of the Risen Star Stakes (G2). After the Iroquois, Dennis’ Moment took a shot at the Breeders’ Cup Juvenile and stumbled at the start. But he lagged at the back and never showed any desire to pass a horse. It’s a bad idea to accept a low price on a horse coming off a layoff with questions surrounding his reputation. If Dennis’ Moment’s price floats up, then reconsider. Use underneath.

6. As Seen On Tv, 9/2 (Lookin at Lucky – Kelly Breen/Paco Lopez – 4: 2-2-0): As Seen On Tv did almost everything right in the Mucho Macho Man Stakes, only losing by a head back on Jan. 4 to Chance It. The two of them rated off the loose pacesetter Smash Factor before attacking on the turn and giving the crowd an exciting stretch battle. It is disappointing he gave away the outside advantage by letting Chance It shift out a little bit, allowing his foe the breathing room to score. But Chance It drew poorly this time, while As Seen on Tv has an ideal post. The pick.

7. Country Grammer, 15-1 (Tonalist – Chad Brown/Javier Castellano – 2: 1-0-0): His maiden win at Aqueduct by 3 ¼ lengths is notable, as the runner-up Portos returned to break his maiden by 10 ¾ lengths and finish a closing third in the Withers Stakes (G3). The New York group of 3-year-olds is not strong in quality, though, and the presence of Brown as his trainer hurts the overall value. Toss.

8. Gear Jockey, 20-1 (Twirling Candy – George Arnold/Julien Leparoux – 5: 0-1-2): Here is another maiden taking a shot at this Derby prep race. In fairness, he finished third in the Breeders’ Cup Juvenile Turf. He also moved into a fast pace in his local Dec. 28 maiden attempt before fading back to fifth late. Endorsing a maiden to win this race is too far, but he could get a piece with conservative tactics. Use underneath.

9. Liam’s Lucky Charm, 15-1 (Khozan – Ralph Nicks/Edgard Zayas – 7: 3-1-2): This one beat Chance It last August in the FTBOA Florida Sire Affirmed Stakes. That race feels like a long time ago, however, and it came over seven furlongs. In his most recent start at nine furlongs, he folded to 10th in the second division of the Risen Star Stakes despite chasing a modest pace. Even though this trip is a little shorter, he simply does not look like the routing type. Toss.

10. Shotski, 10-1 (Blame – Jeremiah O’Dwyer/John Velazquez – 5: 2-1-0): The New York-group of 3-year-old horses is weak, raising some questions about class. Even though he won the Remsen Stakes (G2) at Aqueduct last November, the runner-up Ajaaweed returned to finish a distant third in the Sam F. Davis Stakes (G3). Shotski returned in the Withers Stakes (G3), but he let the inexperienced Max Player mow him down. Why is Shotski cutting back in distance for this? He seemed to improve in those nine furlong races. Toss.

11. Ete Indien, 8-1 (Summer Front – Patrick Biancone/Florent Geroux – 4: 2-1-0): This speedy customer only lost by three lengths to Tiz the Law in the Holy Bull Stakes (G3). He did set the pace and only surrendered grudgingly in the stretch. Ete Indien also put 11 ½ lengths on the third-place Toledo, signaling a fast race. Furthermore, Tiz the Law is considered the best 3-year-old in the country by many handicappers. Ete Indien did not lose to him by a huge margin. But this post position is awful for his style, as he will need to get used early. Win contender.

12. Chance It, 7/2 (Currency Swap – Saffie Joseph Jr./Tyler Gaffalione – 6: 4-2-0): The Mucho Macho Man winner is working up a storm in the mornings. Check out his five-furlong spin from Feb. 17 on XBTV as he toasted his two stablemates, Coach Temple and Flora Fantasy. Chance It also did great in the Mucho Macho Man to handle getting pinned on the inside in the battle with As Seen On Tv. He eventually pushed his way out to get some breathing room and win. But this post position is awful, as he probably cannot clear in time before the turn. He’d be my top pick from a better draw. Instead, Joseph Jr. is considering scratching for another spot. Use underneath.

Conclusion:  With As Seen On Tv drawing Post 6, he is the choice to upset Dennis’ Moment. At the start, Paco Lopez can see how the break unfolds and make the right decisions.

As Seen On Tv displays the right talent and class, as shown in his game battle with Chance It in the Mucho Macho Man Stakes. Note the third-place Sole Volante, who validated the race by returning to win the Sam F. Davis Stakes in his next start.

He also offers the right value, with most of the money expected to fall toward Dennis’ Moment and possibly Chance It. As Seen On Tv is priced perfectly at 9/2.