Fountain of Youth 2021: Odds and analysis 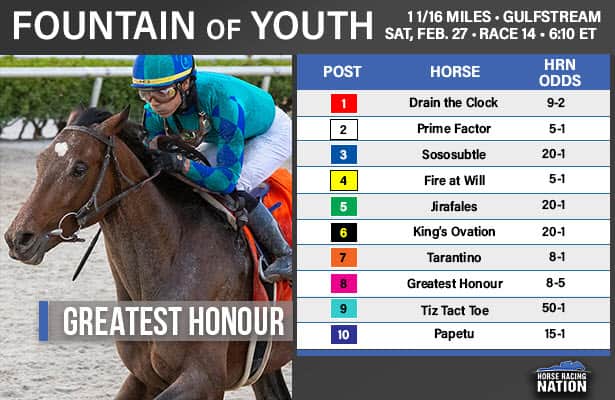 Over the years, the Fountain of Youth has produced 13 winners of the Kentucky Derby, with the most recent being Orb in 2013. Since 1980, 96 starters in the Gulfstream race have found their way into the field for the Run for the Roses.

Here is a full field analysis for the Fountain of Youth, which is carded as the final race out of 14, with post time scheduled for 6:10 pm ET. The morning lines odds are provided by the Horse Racing Nation staff.

1) Drain the Clock (9-2 – Maclean’s Music – Saffie Joseph Jr. / Edgard Zayas – 5: 4-0-0 - $152,550) Trainer Saffie Joseph Jr. chose to stay at Gulfstream and not ship to Aqueduct for the one-turn mile in the Gotham (G3). Drain the Clock is one of the wild cards in the race with his interesting race record and this being his first start beyond seven furlongs. It is noteworthy that he crossed the finish line in first in all four of the races that he completed. He lost his rider in his third career start in a stake at Delta Downs. Even with two wins as a 2-year-old and now another two victories at Gulfstream this year in the Limehouse and the Swale (G3), it is hard to know how he fits on the Derby trail. His win in the Swale was by more than six lengths and earned an 85 Beyer. A wild card.

2) Prime Factor (5-1 – Quality Road – Todd Pletcher / Irad Ortiz Jr. – 2: 1-0-1 - $43,200) Prime Factor finished third in the Holy Bull as the even-money favorite for Todd Pletcher, WinStar Farm and China Horse Club. The $900,000 yearling purchase was highly regarded after his almost nine-length victory in his debut at Gulfstream going six furlongs. In the Holy Bull, he sat in an excellent stalking position but turning for home he never looked like a threat to win and could not keep with top two. He gets another chance to make an impact on the Derby trail. Use in exotics.

3) Sososubtle (20-1 – Speightster – Armando De La Cerda / Paco Lopez – 2: 1-0-0 - $24,400) This Florida-bred began his career unsuccessfully on the grass at Gulfstream and then broke his maiden going a mile against fellow state-breds in January while adding Lasix. Toss.

4) Fire At Will (5-1 – Declaration of War – Michael Maker / Kendrick Carmouche – 4: 3-0-0 - $657,932) Fire At Will is one of the wild card horses in the field as he returns to the dirt for the second time in his career. As a turf horse, he is the winner of the Pilgrim (G2) at Belmont Park and then the Breeders’ Cup Juvenile Turf at odds of 30-1. He was a winner on a sloppy track at Saratoga when the With Anticipation was moved off the grass. He now will make his 2021 debut while testing the waters on the Derby trail. Even with the victory on a wet main track, it is hard to know how the son of Declaration of War will fare in a race such as thiis, regardless of what you think about his pedigree. To his credit, trainer Mike Maker has given him four workouts at Gulfstream on the dirt. Another wild card.

5) Jirafales (20-1 – Social Inclusion – Gustavo Delgado / Javier Castellano – 2: 2-0-0 - $93,064) Jirafiles was the fifth-place finish in the Holy Bull; while never in contention he was 17 lengths behind the winner. In his only other start, the son of speedy sprinter Social Inclusion won a maiden race for Florida-breds at Gulfstream Park West. Toss.

7) Tarantino (8-1 – Pioneerof the Mile – Rodolphe Brisset / Tyler Gaffalione – 4: 2-2-0 - $115,400) Tarantino ran second for the entire Holy Bull (G3) in his first career start on the dirt after two wins and a second in a stake on the grass. He was far behind the winner Greatest Honour in that Derby prep but to his credit he was almost four lengths ahead of the rest of the field. He will have to take another step forward to contend for the win. Use underneath.

8) Greatest Honour (8-5 – Tapit – Shug McGaughey / Jose Ortiz – 5: 2-1-2 - $175,240) His visually impressive victory in the Holy Bull (G3), where he blew past the field rallying around the final turn, moved him toward the top of many Derby contender lists. He recently closed as the 9-1 third individual choice in the Kentucky Derby Future Wager pool 3. Critics will say that most of the field in the Holy Bull did not perform well and that may be true, but the development of Greatest Honour is noteworthy. Trainer Shug McGaughey will continue on the same path that he used with Orb to win the 2013 Derby. The son of Tapit will need to continue to improve with a career high Beyer Speed Figure of 89. Top choice, the favorite.

10) Papetu (15-1 – Dialed In – Antonio Sano / Junior Alvarado – 6: 2-1-0 - $87,925) Here is fourth-place runner from the Holy Bull and he was 10 lengths behind Greatest Honour and less than a length out of the show spot. The second in the Mucho Macho Man back in January made Papetu an interesting horse, but he would have to move ahead to be worth considering in the Fountain of Youth. Toss.

Summary: Greatest Honour goes into the Fountain of Youth as the top choice and a deserving favorite. The field of 10 contains the top five finishers from the Holy Bull, which was run at the same 1 1/16-mile distance just a month ago and the results were not close in any way. Greatest Honour was far in front of Tarantino who was safely ahead of the rest.

Fire At Will and Drain the Clock are the new faces on the Derby trail, and both are hard to handicap in this race. The talented turf horse Fire At Will could be a win contender if his grass form translates to the dirt at Gulfstream. Drain the Clock has a great overall record and has won all three of his starts at the Florida track, but he has never run farther than seven furlongs. But in this field, they are the biggest threats to Greatest Honour.