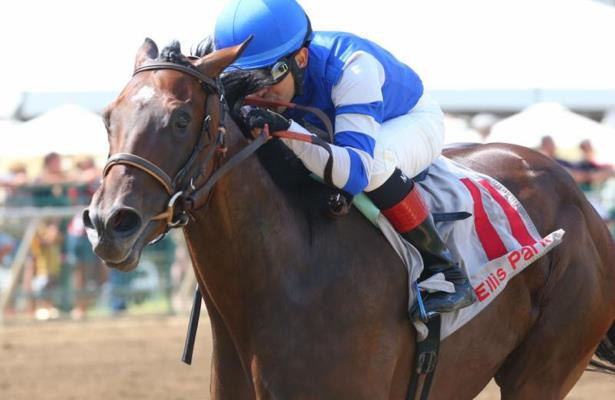 Saturday's Grade 2, $400,000 Fountain of Youth Stakes marks an important step on the road to the 2020 Kentucky Derby with its 50 qualifying points to the winner likely enough to send that horse on to Churchill Downs this May.

A field of 12 entered the 1 1/16-mile Gulfstream Park feature led by Dennis' Moment, the 2-1 morning line favorite who sandwiched impressive maiden and Iroquois Stakes (G3) wins between two debacles of starts, losing his jockey on debut before stumbling at the start of the Breeders' Cup Juvenile.

Among other top contenders, Shooting Star Thoroughbreds’ Chance It, rated second at 7-2 after drawing Post No. 12, will enter the Fountain of Youth, having already won his 3-year-old debut. The Florida-bred colt, who hasn’t been worse than second in six career starts, fought back in deep stretch to capture the $100,000 Mucho Macho Man at Gulfstream Jan. 4.

Ete Indien enters the Fountain of Youth off a solid second-place finish behind Grade 1 winner Tiz the Law in the $250,000 Holy Bull (G3) at Gulfstream Feb. 1. The gelded son of Summer Front set a pressure pace into the stretch before succumbing to Tiz the Law but continuing on gamely to finish 11 ½ lengths clear of third-place finisher Toledo.

Shotski will enter the Fountain of Youth with proven Grade 2 success around two turns, having captured the Remsen (G2) at Aqueduct Dec. 7. The son of Blame led throughout the 1 1/8-mile Remsen. In his Feb. 13 return to action at Aqueduct, Shotski set a pressure pace before faltering in the stretch to finish second in the Withers (G3) at Aqueduct, 3 ¼ lengths behind Max Player.

Screen Door Stables LLC’s As Seen On Tv, who finished a head behind Chance It after holding the lead late in the Mucho Macho Man, is set for a return in the Fountain of Youth. The Kelly Breen-trained son of Lookin At Lucky, who has finished no worse than second in four starts, had previously captured the 6 ½-furlong Juvenile Sprint for Florida- breds at Gulfstream Park West.

Mathis Stable LLC’s Candy Tycoon, who broke through with a maiden victory on the undercard of the Pegasus World Cup Invitational (G1) Jan. 25, is slated to make a return to action in the Fountain of Youth. Trained by Todd Pletcher, the son of Twirling Candy scored by four lengths at the 1 1/16-mile distance to graduate in his fifth career start.

TimeFormUS' Pace Projector expects No. 6 As Seen On Tv, No. 10 Shotski and No. 1 Candy Tycoon to figure prominently early, noting the fractions could heat up as Dennis' Moment and Ete Indien sit in behind the leaders.

Fountain of Youth on TV

Are you looking for a better deal?  If so, we wanted to tell you about this new offer from TVG.  They are offering a $200 Risk Free Bet which is such a good deal, it is available to new members only.  Note this is only available in legal betting states.

Ten of the 14 races on the Gulfstream Park card on Saturday are stakes races, with nine of them graded event. The Late Pick 4 features a guaranteed $750,000 pool, while the Late Pick 5 boasts a $500,000 guarantee. All approximate post times Eastern.