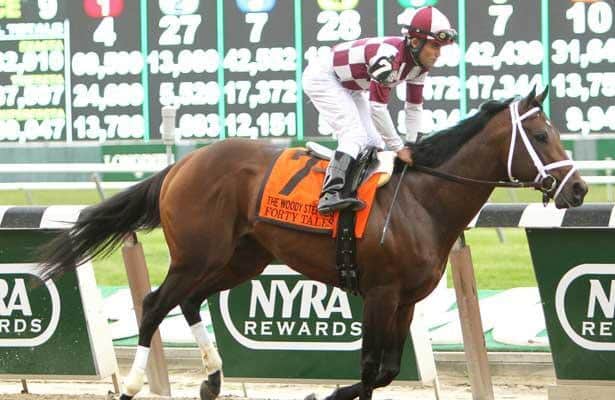 Forty Tales, one of three entrants for trainer Todd Pletcher, will attempt to extend his winning streak to four and earn his first Grade 1 victory when he competes in the $500,000 Foxwoods King's Bishop on Saturday at Saratoga Race Course.

The seven-furlong Foxwoods King's Bishop for 3-year-olds, race 11, is the third of four graded stakes on the Travers Day card and attracted a full field of 14.

In all three races, Forty Tales came from off the pace to win by a narrow margin, taking the Derby Trial by three-quarters of a length and the Woody Stephens and Amsterdam by a neck.

"I couldn't be happier about the way he's run in his last three races," said Pletcher. "I think we have found his niche, and he certainly would be a worthy winner after the résumé he has put together."

Pletcher expects Eclipse Thoroughbred Partners' Capo Bastone and Overanalyze to join Forty Tales at the back of the pack in the early stages of the Foxwoods King's Bishop.

"It's unusual that we have three horses who don't have any speed," said Pletcher. "I would anticipate Overanalyze backing from long races to short wouldn't show a lot of speed. Capo Bastone and Forty Tales seem to have had most of their success coming from off the pace. It's a big field. We'll hope for a fast pace and good trips for all three of them."

In the Derby Trial, Capo Bastone rallied from even farther back than Forty Tales, trailing the field in ninth, 15 lengths behind the leader, following the opening quarter-mile and just failing to nail his stablemate on the wire.

Capo Bastone has made one start since the Derby Trial, finishing seventh, beaten 6 ½ lengths, in the Woody Stephens.

"We kicked around a lot of options [after the Woody Stephens]," said Pletcher. "We breezed him on the grass, and he breezed pretty well. We were looking for the right place to bring him back, and we couldn't find the exact spot. As we were training him, it seemed like he's been doing better, better, and better, so we figured that when he is training like he's in good form that we'd give him a shot in the big one."

Mike Repole's Overanalyze will make his first sprint start since winning the Grade 2 Futurity by 3 ¼ lengths last September at Belmont Park. Since then, he has added wins in a pair of 1 1/8 mile races - the Grade 2 Remsen in November at Aqueduct Racetrack and the Grade 1 Arkansas Derby in April at Oaklawn Park - and is cutting back in distance ]after finishing a well-beaten third in the Grade 2, 1 1/8-mile West Virginia Derby on August 3 at Mountaineer Racetrack.

"We looked back at his form during his 2-year-old year," said Pletcher. "He won impressively going five furlongs in his first start, and you can argue his Futurity win where he got pinched back at the start and closed really well was arguably his strongest performance. We're trying to find his niche again. While he has won going a mile and an eighth twice, he has also had some success sprinting, so we decided to cut him back and give it a try."

Overanalyze, 12-1, will depart from post 9 with Javier Castellano aboard.

Salutos Amigos, trained by Eric Guillot for Southern Equine Stable and Mike Smith, seeks his first stakes win in the Foxwoods King's Bishop. In the Amsterdam, he raced close to the pace near the rail along the backstretch, dropped back and came off the fence on the turn, cut back to the inside, and made a steady advance in the stretch to finish 1 ¾ lengths behind Forty Tales.

Once again, Salutos Amigos will have to work out a trip from the inside, having drawn the rail post for the Foxwoods King's Bishop.

Guillot says Salutos Amigos, who has one victory in seven career starts and was ninth in the Woody Stephens, is in the best condition of his career, having moved past chronic foot problems.

"When I bought the horse and put him on the shelf, he had real spongy, real crumbly, a real bad horny wall on him," said Guillot. "You couldn't put in any nails; you had to kind of glue - put a nail, glue, put a nail, glue. It would take two hours ... to put a shoe job on him. I knew it would take six months to grow out. They've grown out. I don't have any more glue on the horse. The day after I shoe him, he goes like a champ. I don't have to keep him on any kind of medication to keep his feet right. The horse went from shuffling like he was on egg shells to striding out like a good horse."

Jose Ortiz has the assignment aboard Salutos Amigos, 12-1.

Central Banker will switch from turf to dirt for the Foxwoods King's Bishop, having rallied from midpack and drawn off in the stretch to take the 5 ½-furlong Smirnoff Sorbet Quick Call by 3 ¾ lengths on July 25 at the Spa.

The Smirnoff Sorbet Quick Call was Central Banker's first start since he was fifth in the Grade 3 Delta Jackpot on the dirt last November at Delta Downs, his only route try to date. In two previous dirt tries, he was third in his debut during last year's Saratoga meet and won an entry-level optional claimer by five lengths at Churchill Downs in the fall.

"He did the same type of thing last year: He went from two turf races to an allowance race in Kentucky on the dirt he won by five lengths," said Al Stall, who trains Central Banker for Klaravich Stables and William H. Lawrence. "He looked really comfortable on the dirt that day, and we want to see if history can repeat itself. Plus, there aren't many turf opportunities for 3-year-olds this time of year. I, personally, don't know [what surface is best for Central Banker]. Hopefully, he can also do dirt, and that will give us other options as we go down the road. This is an experiment where we're taking our shot in a Grade 1. We think we have a chance and we're cautiously optimistic that it will work out."

The field also includes Slan Abhaile, who took an allowance for non-winners of two races lifetime on August 3 at Saratoga; Majestic Hussar, victorious in an third-level optional claimer on August 4 at the Spa; Bad Hombre, promoted to second in the Saratoga's Curlin on July 26; Let Em Shine, making his first start since setting the pace and finishing fourth in the Woody Stephens; Integrity, sixth in a second-level optional claimer on July 20 at Saratoga; Miraculousmo, who broke his maiden on July 20 at the Spa; and No Distinction, second to Central Banker in the Smirnoff Sorbet Quick Call, his turf debut.