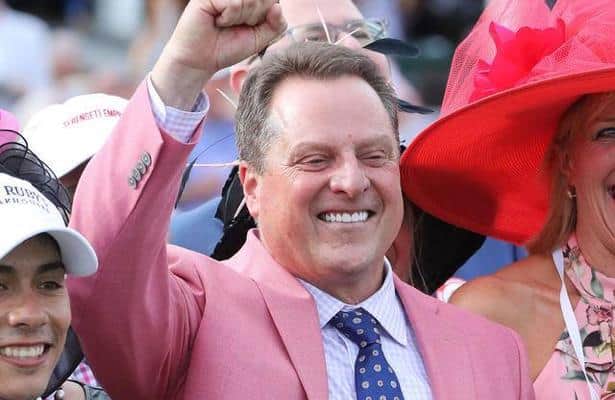 When the first Saturday of May 2020 rolled around, Dean Martini stood at 0-for-7 lifetime. Fortunately for the 3-year-old gelding, he and the rest of his crop got a few extra months to build their Road to the Kentucky Derby resumes.

Now, Dean Martini is officially on the Derby trail. The son of Cairo Prince scored a 14-1 upset Saturday at Thistledown in the Grade 3, $500,000 Ohio Derby, collecting 20 points toward the Kentucky Derby starting gates.

Dean Martini was a $220,000 yearling purchase for Rockingham Ranch in 2018. He started his career 0-for-4 running for trainer Peter Miller, then fell short in another three attempts at the maiden special weight level for Brad Cox.

Cox finally dropped Dean Martini into the maiden claiming ranks May 17 at Churchill, and the eighth try proved to be the charm. Amoss and new owner S. Bradford Rives claimed him for $50,000 out of that start.

Dean Martini ran second June 12 in his first start for Amoss, an allowance optional claiming race at Churchill. The trainer turned him around in two weeks for his first try against graded company Saturday at Thistledown.

Under jockey Ricardo Mejias, Dean Martini broke sharply for the rail in the 1 1/8-mile Ohio Derby. He settled in comfortably behind while Rowdy Yates and Lebda went out to the early lead.

Dean Martini moved forward going into the second turn, drawing alongside Lebda before passing that one turning into the stretch. Mejias gave him some right-handed urging, and he had just enough to hold off a late-charging South Bend.

Amoss will still need to find another spot for Dean Martini between now and Sept. 5 if the gelding – who is not yet Triple Crown nominated – is to earn enough points to qualify for the Run for the Roses. If he stays in the Midwest, the Ellis Park Derby on Aug. 9 awards its winner 50 Kentucky Derby points.