Life Is Good is taken from Baffert to Pletcher 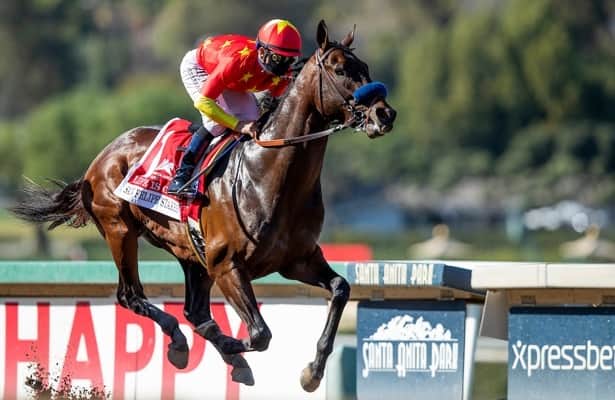 Life Is Good, the individual favorite in four pools of this year's Kentucky Derby Future Wager before being injured, had his first work back for owners WinStar Farm and China Horse Club at Keeneland Race Course on Thursday.

A perfect 3-for-3 for trainer Bob Baffert this winter, Life Is Good breezed three furlongs in 37.0 seconds.

In a text message to Horse Racing Nation, WinStar president and CEO Elliott Walden said Life Is Good will be sent to trainer Todd Pletcher in New York when ready to return to the races.

"Life Is Good worked this a.m. with our farm trainer, Destin Heath at Keeneland," Walden relayed. "His team has done a wonderful job getting him back to the work tab. He went 37 and out in 49.2. The plan is to ship to Todd Pletcher in the coming weeks with a possibility of running in New York later this year."

By Into Mischief, Life Is Good followed a debut win at Del Mar in late November with victories in the Sham Stakes (G3) and San Felipe Stakes (G2) on March 6. He was diagnosed with an ankle chip 14 days later after a workout and was sent to Rood & Riddle equine hospital in Kentucky for surgery.

Earlier this week, WinStar transferred its 4-year-old colt Country Grammer from the Baffert barn in California to Pletcher. The move came in the wake of Baffert being suspended from entering horses at Churchill Downs and at New York racetracks as a result of Medina Spirit's drug positive in the Kentucky Derby.

"With the ban on Bob in Kentucky and New York right now, our opportunities are limited. We will continue to evaluate the situation with Bob and appreciate everything he has done with Life Is Good," Walden said.

Life Is Good Todd A. Pletcher