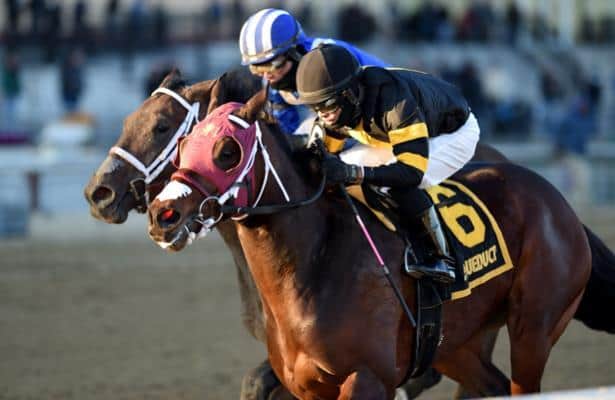 Unraced since finishing fourth in last year’s Fountain of Youth, the Blame colt is entered in an allowance optional claiming race Friday at Aqueduct, going one mile on dirt with Kendrick Carmouche aboard.

“It’s a track he’s very familiar with — he had his biggest victory there,” trainer Jerry O’Dwyer said Tuesday. “We know he goes over the surface well and likes it there. So it’s a good starting point for him. We had him back on the go here a while now, and he seems very fit and well and has plenty of enthusiasm.”

Shotski created early buzz on the 2020 Kentucky Derby trail when he won the Grade 2 Remsen at Aqueduct in December 2019. That was followed by a runner-up effort in the Withers (G3) and then the Fountain of Youth for a total of 19 qualifying points.

But that was the end of his racing for the year. He traveled to Dubai for the UAE Derby, which was canceled, and then was nominated to the Arkansas Derby (G1). But O’Dwyer opted to hold him out of that race, and then the colt developed bone bruising.

“The only thing you can do with that is give him time,” O’Dwyer said. “But it was very even all around, so we gave him the time and did everything right by the horse.”

Owned by Gary Barber, Wachtel Stable, Pantofel Stable and Howling Pigion Farms LLC, Shotski was rehabbed at Fair Hill. He worked on the synthetic surface there until being returned to O’Dwyer at Laurel Park in November.

“He seems to have come back as good as ever,” O’Dwyer said. “He’s going to have to be after improving from 3 to 4, and these other horses as well. And I’m hoping he has — his homework suggests he has. But they have to go and prove it on the day at the race.”

O’Dwyer joked that if Shotski wins on Friday, future plans will include “every Grade 1 in the country.”

In reality, though, “we’ll let him to the talking. We’ll let him run his race here on Friday, see how he does and comes out of it. His owners are very good, and we chat about our plans and what we’d like to do and where we’d like to go. So depending on how he runs on Friday, that will determine where we go next with him.”

Shotski is not quite the same colt this time around, O’Dwyer said.

“He used to be very laid back and lazy in his work. He’s still pretty laid back, but he has more enthusiasm this time around than last time around. He’s more — you see more in his work than you would have before.”

And, he said, Shotski “loves training. He goes out there and he’s a very happy boy, a very kind horse to be around. … He just likes to do his training, he’s not aggressive in his gallops. He just goes out and does what you want him to.

“You kind of need to have a little bit of company to get a bit of work into him,” O’Dwyer added. “If he’s on his own, he’s very relaxed. But when he’s in company, he’s a different horse.”