For MLB All Star Martinez, racing King Guillermo is personal 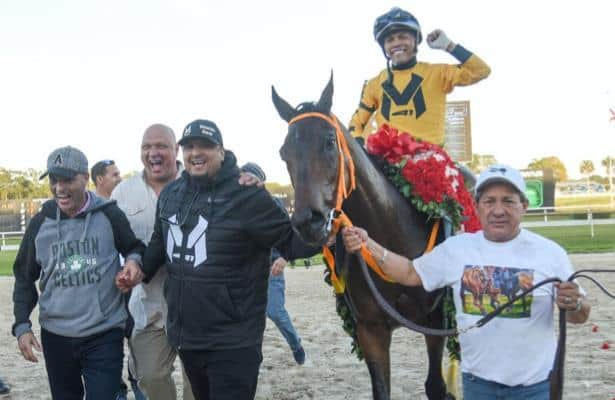 King Guillermo is set to make his first start in seven months in Saturday's Grade 1 Cigar Mile at Aqueduct.

It's been a long wait for those whose hopes were raised by the Uncle Mo colt when he upset the Tampa Bay Derby (G2) at 49-1. Next, he was second in the Arkansas Derby (G1). Then his connections, which include owner Victor Martinez — a five-time Major League Baseball All Star — and trainer Juan Carlos Avila made the the decision to keep him out of the starting gate until he could run in Martinez' dream race: the Kentucky Derby. But two days before the Sept. 5 Run for the Roses, he was scratched after spiking a fever.

Martinez discussed the colt in a video produced by the New York Racing Association.

King Guillermo owner, and former player for the @tigers Victor Martinez, talks about his emotional connection with the Cigar Mile contender... pic.twitter.com/NYecn4vg82

In the video from the New York Racing Association, Martinez — a native of Venezuela — said the Kentucky Derby was front and center when he joined forces with fellow Venezuelan Avila to make his first Thoroughbred purchase.

“I’ve been a dreamer my whole life, my whole career. I came here, the United States, with zero dollars in my pockets and went out, keep dreaming," Martinez continued. "And he told me, 'OK, I’m going to look for a decent race for him.' No, no, I don’t want a race a decent race. I want you to put him in a race that you point to the Kentucky Derby.

Martinez said initially he was unaware the 4 3/4-length win in the Tampa Bay Derby made King Guillermo an almost certain contender for the Derby until he was asked about it by the news media after the race.

When he was playing baseball, Martinez said, "I used to say I'd rather be lucky than good."

And he explains how he got lucky with King Guillermo, whom he bought for $150,000 in the Ocala Breeders April 2019 Spring Sale of 2-Year-Olds in Training.

“If King Guillermo would have weighed a hundred more pounds, then we wouldn’t be able to buy him. He would have cost way more money," Martinez said. "So I was the same way. When I signed for professional baseball, I was 120 pounds, 130 pounds. He was a little guy that a lot of people didn’t pay attention to."

King Guillermo would be named after Martinez' father.

"For me, it’s just great when I hear the name of my dad on the TV, on a show or something. I talked to my mom one time, and I told my mom, you might hear — my dad is looking down.”