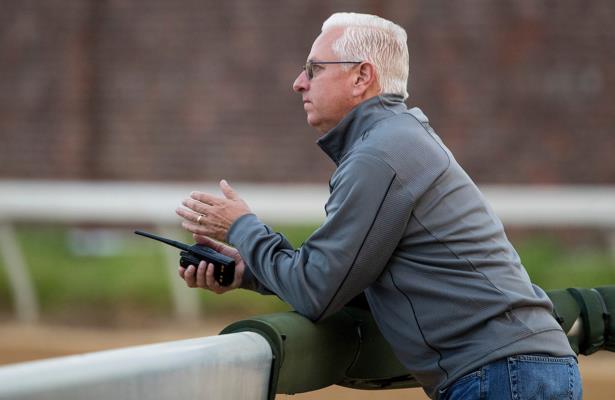 For those with a top-class 3-year-old in the barn, springtime is supposed to elicit excitement and optimism, not uncertainty. Unfortunately, this has morphed into a season full of unknowns, with the 2020 Kentucky Derby pushed back four months to Sept. 5 and an overall racing schedule left in flux due to the coronavirus pandemic.

In a national media teleconference this week, the connections of colts entered in Saturday’s Grade 1, $750,000 Florida Derby at Gulfstream Park offered insight into a unique situation.

“Thinking a whole lot past this weekend is very likely to give you a pretty strong headache,” noted trainer Michael Trombetta, who on Saturday will saddle Independence Hall.

The 1 1/8-mile Florida Derby, which provides 170 qualifying points for the Kentucky Derby, is one of only three preps currently scheduled for the delayed 1 ¼-mile classic. Next week, Santa Anita is slated to run the Santa Anita Derby (G1), and that will be followed by the Arkansas Derby (G1) at Oaklawn Park, which has been pushed back from April 4 to May 2 to fill the void left by the Kentucky Derby.

Beyond that, the road to the 2020 Kentucky Derby will be blazing uncharted territory.

“There is no game plan beyond [Saturday],” said Sackatoga Stable’s Jack Knowlton, who campaigns Florida Derby favorite Tiz the Law with trainer Barclay Tagg. “Barclay and I have talked about it, but nobody knows what next races there may be. Really, it’s a blank sheet in front of us with no idea where we go or what we do.”

Trainer Todd Pletcher has two entered for the Florida Derby in Gouverneur Morris and Candy Tycoon. He also has not looked beyond this weekend given the uncertainty of the coronavirus impact.

“It’s impossible to say [what’s next],” Pletcher said. “I think right now all you’re looking at is getting a horse prepared for its upcoming race, whether that’s this week or in a couple of weeks...It’s just a frustrating time for everyone, so juggling horse schedules seems like unimportant stuff considering what’s going on in the rest of the world.”

Pletcher has won two Kentucky Derbys, with Super Saver in 2010 and Always Dreaming in 2017. Given that previous success, and decades of experience chasing the “Run for the Roses,” he noted what “an enormous impact” it has to push the Kentucky Derby from its traditional first Saturday in May to early September.

“It dramatically affects the race,” Pletcher said. “There’s going to be a number of horses that were maybe sitting on peak performances in the next couple months that might not be in peak form in September. And you’re going to see horses who might benefit from the additional four months that weren’t even on the trail at the moment, or certainly weren’t going to be in position to get enough points to get in.”

Officials for Churchill Downs have said additional Kentucky Derby preps will be scheduled for this summer, though when that announcement will come is unknown. Until further clarification is provided, horsemen are left to wait and wonder.

“In life as in horse racing, four months is an awfully long time when you’re talking about changing a schedule,” Pletcher said. “It’s a little too far out to say exactly what you’re going to do given all the uncertainty.”