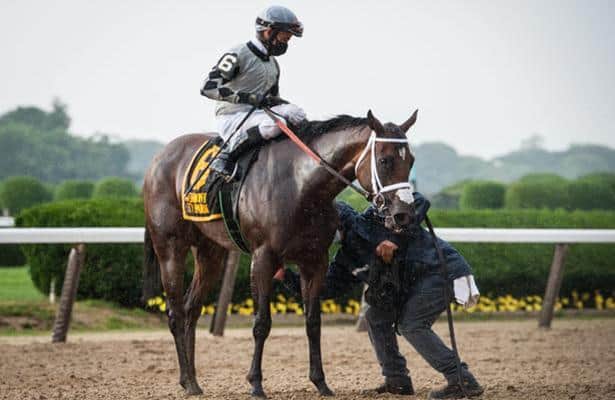 Trainer Todd Beattie said Victim of Love came out of her first graded stakes win in good order, praising the Speightstown mare one day after she posted a 1 ¾-length win in the Grade 3 Vagrancy at Belmont Park.

"Things are really good. It's a big plus with this filly that she just goes to work every day," Beattie said. "I can't say enough about her that way. She's in good shape this morning."

Victim of Love, who has raced extensively on the Maryland circuit, ended her sophomore year with on-the-board finishes in three of her last four starts, including a third-place finish in the Safely Kept in November at Laurel. Running back at the same track in her seasonal bow, she won her first stakes with a 3 ¾-length win in the What A Summer on January 8 before a runner-up effort in her graded stakes debut in the Grade 3 Barbara Fritchie on February 15.

"I really think this filly has improved drastically over the last seven months," Beattie said. "I could see small things coming together with her in her training. Just around the barn, with her overall health, too. I think her best days are in front of her."

After training well in the mornings at Penn National, where Victim of Love is stabled, Beattie said the timing felt right to have her ship in to make her first start in New York, despite what the bettors felt before the gates opened. Her last two wins have also come at the Vagrancy's 6 ½-furlong distance, which her conditioner said suits her style.

"I know we were a long shot but I'm not a gambling man. I didn't actually put a dime on her," Beattie said. "Looking at the race, I respected the horses they had in there, but I thought there was a really good chance.

"I know she likes the surface and I know she likes that distance. She's a middle-distance-type horse and I really thought there was a good chance she could really step forward, just in how she was doing," Beattie continued. "She was training well and showing me a lot in the morning. So, I thought to take the chance, this would be the time."

Victim of Love does not have a confirmed next start picked out. But Beattie said a track that has a propensity for rain and the chance off an off-track are good for her running style, and the summer meet at Saratoga Race Course, from July 18 to September 7, fits that bill.

"Oh yeah, especially out there where they have a lot wet weather," Beattie said with a laugh. "I didn't dial in anything else yet. Figured I had to watch her a couple of days and I'll see where things are and over the week, I'll start making the decisions. My clients are California people, so obviously I'll be discussing it with them and come across our spot."

Beattie won his first graded stakes since Taris captured the 2014 Grade 2 Raven Run at Keeneland. He has posted eight career graded stakes wins, with Fabulous Strike capturing the first five for him from 2007-09, including his previous one at Belmont Park in the 2009 Grade 2 True North.

"It's been awhile. I haven't had a whole lot going on but I've lessened my numbers," Beattie said. "But it's extra special [to win at Belmont]. I have so much respect for that place. Anytime I cross that Hudson and have any success, I feel lucky."