An 'audible' leads Zulu Alpha back for Gulfstream's Pan American 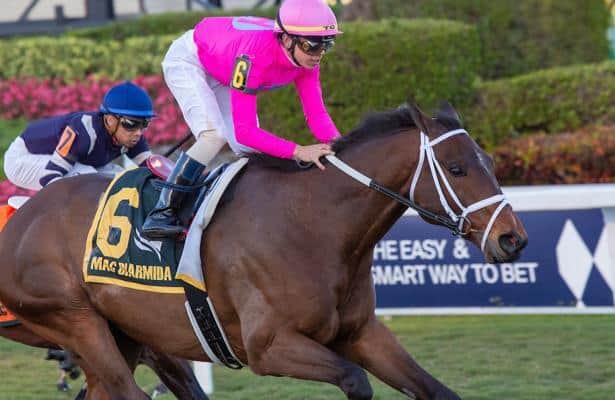 Even if it wasn’t in the original plans, the connections for claimer-turned-Grade 1-winning multi-millionaire Zulu Alpha couldn’t have found a better landing spot than Saturday’s Grade 2, $200,000 Pan American at Gulfstream Park.

Trainer Mike Maker had wanted to give Zulu Alpha some time following the 7-year-old gelding’s repeat victory in the Mac Diarmida (G2) on Feb. 29. It was the second triumph of the Championship Meet for Zulu Alpha, who opened 2020 with a career-highlight victory in the $1 million Pegasus World Cup Turf Invitational (G1) Jan. 25.

“He continues to do excellent. I called an audible since the [Kentucky] Derby day stakes had been canceled, so we elected for the Pan American,” Maker said. “He’s had a great winter.”

Zulu Alpha trailed all but two horses before using a patient, rail-skimming trip to find room in the stretch and go on to a two-length victory in the 1 3/16-mile Pegasus. He got the exact opposite trip in the 1 3/8-mile Mac Diarmida, making a sweeping five-wide move before getting up to win by a length.

Both races came under jockey Tyler Gaffalione, who returns to ride from Post 9 of 10 at co-topweight of 124 pounds.

“It’s just the way the races shaped up. The bottom line is, the horse likes to win,” Maker said. “The last time he didn’t get away good and had a wide trip, but he was able to get the job done. We’re looking for another big performance this Saturday.”

“I feel blessed. How often does an individual like me get this kind of horse with this kind of success and compete at this level?” Hui said. “You just don’t see it.”

Added Maker: “Winning the Pegasus was exciting and the fact that Michael Hui got to experience it – he’s just been such a great client and a great guy that it was very well-deserved.”

Maker will also send out Paradise Farm Corp.’s Bemma’s Boy, a 5-year-old Into Mischief gelding he claimed for $30,000 last May. Bemma’s Boy was fourth, beaten less than a length, in the 1 1/8-mile River City Handicap (G3) to end his 2019 campaign, and kicked off this year running third by the same three-quarter-length margin in the 1 ½-mile John B. Connally (G3) Jan. 26 at Sam Houston.

“He’s another one that is on top of his game. He had some bad luck at Sam Houston last time, otherwise I felt he was the best horse in the race,” Maker said. “He’s been his own worst enemy at the gate.”

Florent Geroux has the call on Bemma’s Boy from Post 2.

A third Maker trainee, Paradise Farms Corp. and Mad Dog Racing Stable’s Go Poke the Bear, will make his stakes debut in the Pan American. He was a head winner of a 1 1/8-mile optional claiming allowance Jan. 1 at Gulfstream, his most recent start and first off a $50,000 claim last fall.

Calumet Farm’s Channel Cat enters the Pan American with a lifetime bankroll just shy of the $1 million mark at $938,992 from 21 starts including his lone graded-stakes triumph in the 2019 Bowling Green (G2) last summer at Saratoga.

A 5-year-old son of turf champion English Channel, who shared the same trainer in Todd Pletcher, Channel Cat ran into trouble early in the Pegasus Turf and was never in contention finishing 10th. It was one of only two off-the-board efforts in seven tries at Gulfstream, where he owns two wins, one second and two thirds.

West Point Thoroughbreds, New Phoenix Stable, Louisa Stevenson and Tango Uniform Racing’s Focus Group was a popular nose winner of last year’s Pan American, which marked his third win and second stakes in four starts. He went winless in five subsequent tries to end the year, and will be racing for the first time in five months and first for trainer Christophe Clement.