Flores rides off into retirement at Del Mar 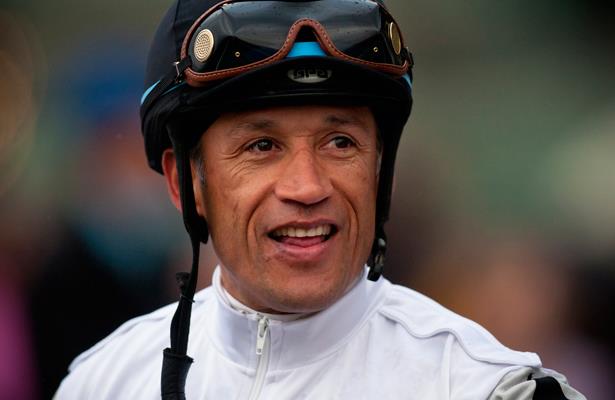 When David Flores hops aboard Red Livy for Phil D’Amato in today’s second race it will be for the final ride of a 33-year-career. Flores said he doesn’t know how he’s going to feel, but he knows he’ll be feeling a lot.

“I try not to think about it. But it is emotional,” Flores said Friday afternoon. “There’s so many good memories for me here. From both the old (facility) and the new.”

Flores, 49, has announced that after his ride today he’ll be retiring to Ocala, Fla., to work with young horses at a training center there.

David Ramon Flores was born in Tijuana. His father, also David, was a jockey at the Caliente racetrack there and, for many years, an exercise rider in Southern California. Young David followed the path to Caliente where he was a regular for five years, setting an apprentice record of 61 wins there in 1984. But Southern California beckoned.

“I remember getting my passport to come here as an apprentice and it was a dream come true,” Flores said. “I remember watching races here from Caliente. Watching (Bill) Shoemaker, Laffit (Pincay), (Eddie) Delahoussaye, (Chris) McCarron and all the great riders that were here at the time. My dream was to ride a race at Del Mar.”

It was realized via some Caliente connections.

“Juan Garcia was the leading trainer at Tijuana for a long time and he was the one who suggested I go to his son, Victor Garcia, to help me out,” Flores said. “Alex Procel was my agent. They put me on a horse and I finished second and was very thrilled.

“That was in 1989. I had no idea I would be able to stay and ride with all those Hall of Fame riders for so many years.”

Flores rode in California for 25 years, went to Singapore for two, took a break to work in Ocala, came back to ride in Kentucky and Louisiana then returned home for the spring-summer meeting at Santa Anita and a farewell shot at Del Mar.

Forty-nine of more than 100 career stakes wins for Flores were accomplished here. He won nine stakes, among them all four Grade I events, and the riding title in 1999, capping it off with a victory in the Del Mar Futurity aboard Forest Camp for trainer Bob Baffert.

“ I rode a lot of good horses that year,” Flores said. “I rode for Bob Baffert for at least 10 years and he put me on a lot of his best that year. He was starting to make the transition from quarter horses when I first came over from Caliente. Bob and (major owner) Mike Pegram were both big helps to my career.”

“I remember beating Laffit in that race, wire to wire with Laffit at my side the whole way,” Flores said. “That was one race that proved I could ride with those guys.”

When he returned from Singapore, Flores took a break from race riding and moved to Ocala, Fla., to learn about other aspects of the game, especially working with young horses that arrive at the training center from the breeding farms.

“In Ocala, there’s no tracks. It’s just horses, and I feel I’ll be comfortable there. It’s hard for me to watch races and not be in them,” Flores said.

“I love the babies. It’s so much fun to see them transition and really become runners. You can see, by the way they move when they gallop around, the good horse from the average horse. I like that. And there’s a good chance I can get on those horses to get the feeling of that power and ability of a good horse, I don’t have to be in the winner’s circle.”

The decision to retire he expects to be irreversible.

“I remember seeing guys about to turn 50 or in their 50s who were about to retire and they looked old to me,” Flores said. “I don’t feel old. But it’s time for me to move on.”