Flightline or bust: Trainers talk about how to win Pacific Classic 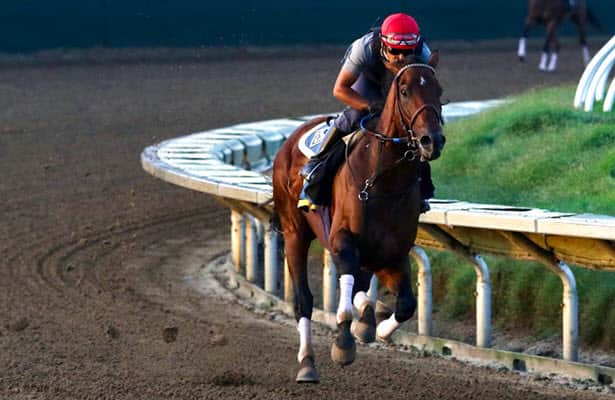 John Sadler has become a familiar face in the winner’s circle after the Pacific Classic. He has trained three of the last four horses to get there.

Even counting Accelerate, who was a 2-5 favorite in 2018, Sadler’s biggest favorite probably will be Saturday. With his 4-for-4 record, Flightline is 1-5 on the morning line. There is no shortage of opinion that the price will be even shorter when the Grade 1, $1 million highlight of the Del Mar summer starts at 8:50 p.m. EDT.

Flightline and his five rivals are trained by five trainers who have combined to win the Pacific Classic 13 times. Bob Baffert shares the record with the late Bobby Frankel, each with six wins. Fellow Hall of Famer Richard Mandella has won it four times, most memorably in 2015 with the iconic mare Beholder.

With their long shots, John Shirreffs and Ed Moger Jr. are hoping to win the race for the first time.

Each trainer spoke Thursday to Horse Racing Nation to preview the race and suggest what it would take for his horse to win. (Morning-line odds are in parentheses.)

Where does he want Tyler Baze to put him early in the race? “Extra Hope likes to run right away into the race near the pace – or make it. With Flightline in there, nobody might make it. The pace might be taken. We won’t discourage him. We’ll let him break and place him where he’s comfortable.”

Will that be as much to create an honest pace for stablemate Royal Ship? “No. Two different owners and two different interests. Each horse is on its own.”

How does he see the early speed? “I’m guessing that there’ll be a good pace. (Flightline) will probably be it, but we just have to see what happens when they leave the gate.”

Where should John Velázquez ride him early? “He’s not a horse that comes in from out of the clouds. You can’t do that here. You’ve got to be up close. He doesn’t like running on the inside. Once he gets to the outside, that’s when he starts riding. A lot of times when he’s had the outside, he’s carried wide. … He has to break well and get in the race. He just sort of has one pace. He doesn’t really quicken.”

How will the early pace look? “I don’t see a lot of speed in the race. I see Flightline just taking control of the race early. I think (Stilleto Boy) is more effective when he has the lead. Can he get it away from Flightline? He can break and immediately get out of danger. In the Met Mile (G1) he was in a tight spot for a minute, but those good horses, they find a way to get out of there.”

About Flightline. “I have a lot of respect for him. He’s fast. His races at one turn have been just phenomenal. He’s had plenty of time to recover. That’s a big thing in this business. They’ve managed him really perfectly. No rush. I’ve been watching him train, and I don’t see him regressing. Watching him train, he reminds me of American Pharoah.”

Can Flightline get two turns and 1 1/4 miles? “I haven’t seen anything that would make me say that he’s suspect. Still, you don’t know when they turn for home if he’s going to have that other gear. I’ve had horses that were suspect going long, but they’ve handled it here. They can carry their speed.”

How might the hot weather impact the race? “We know Country Grammer likes it,” Baffert said, referring to a runner-up finish in the Saudi Cup (G1) and a victory in the Dubai World Cup (G1).

What did he show in winning July 24 in the San Diego Handicap (G2)? “He’s maybe not the most consistent in his efforts, but when he’s good, he’s real good, and he showed that. We’re just hoping we filled the tank back, and we’re ready to do it again.”

Where would Mike Smith be expected to ride him early? “I want him wherever Mike and him feel happiest.”

What would it take for either of his horses to win? “They have to run the race of their life – and maybe a lesser effort from Flightline or Country Grammer. On his day he’s good. [Country Grammer] and Royal Ship have beaten each other, so he can win. All the horses in their have a good shot to win if they run their best race ever, and if somebody else doesn’t. All we can do is hope we are at our best – and somebody stubs their toe.”

About Flightline. “I hope he scratches,” Mandella said, laughing. “He appears to be a very special horse. He looks like he’s the extreme. Probably nobody will beat him, but I’m not going to sit here and watch. I’m going to try and get it done.”

Where would jockey Víctor Espinoza ideally have him in the first half of the race? “We’d like for him to have an outside position. That’s all. I don’t know what the pace will be, if there’ll be a lot of speed, a little speed. I don’t think anybody knows. But if he gets a nice, outside position, he doesn’t have to be real close. He could be close, but it really doesn’t matter.”

Flightline is not the only horse Shirreffs considered a serious threat to win. “When you look at Country Grammer, you look at Bob Baffert and what he’s accomplished in his career. He wouldn’t have Country Grammer in there if he didn’t really like him.”

What he sees in Flightline. “I’ve watched him gallop in the morning, and he gets over the ground really well. As far as I can see, he looks like a really solid horse.”

By Union Rags out of a Mineshaft mare, and with a win in this year’s Santa Anita Handicap (G1), has Express Train met the expectations of his breeding? “Obviously, he’s met those expectations. You never know when you have a 2-year-old come in what they’re going to accomplish. The one thing about Express Train is he’s all heart. He gives it everything. He doesn’t have any quit in him.”

He talked to the Del Mar communications team about how the post position would not be a big worry for jockey Flavien Prat. “Not too much, because you have that good, long run. You have about a quarter-mile run into the first turn, so you have time to work out a nice trip. … He’s tactical. He doesn’t have to have the lead, and he doesn’t have to be way back, either. If you think about what you want, you jinx the post. You just let it happen, and that’s a good post.”

Evaluating the field for HRN. “I look at it like it’s a really, good field. You can make a case for every horse in there. Even though it’s going to be a small field, it’s a very good group. I’ve watched all the races of all the horses, because they’re all familiar with me. I don’t take any of them lightly. Those are all very nice horses. We’re going to go over there feeling good, and they’re going to go over feeling good, and then let it sort itself out.”

How it feels to be in position to win this race a fourth time in five years. “That’d be nice. We’ve had good luck in the last few years, but if you look at it historically, I think Frankel has six, and I think Baffert has six, so I’ve got a little catching up to do.”

Will he contend for the early lead? “I don’t plan on being anywhere near Flightline the first part, because I don’t think our horse is that fast. There might be others that are closer to (the early pace). Honestly, I haven’t looked that close yet. The way I look at it, he’s probably going to just run his race wherever. If he wants to be forward, we’ll let him be forward. If he wants to be second, that’s fine. Whatever is comfortable for him.”

Can anything be taken from Stilleto Boy’s distant, third-place finish to Flightline in the seven-furlong Malibu (G1) on Dec. 26? “It doesn’t look like that on Saturday. Seven furlongs isn’t really our best distance. I’m not positive a mile-and-a-quarter is our best distance, either. Our horse seems to show up every time, so I’m sure he’ll be trying hard.”

How important is it to have Del Mar’s leading 2022 rider Juan Hernández on him? “I’ve always liked Juan. He started riding for me up in Northern California before he came down here. He’s actually even more seasoned just in the last year. He’s strong.”

Stilleto Boy is 3: 0-0-1 at 1 1/4 miles. Flightline has yet to race that far. “(Flightline) has never run two turns. He’s never gone past a mile. You keep wondering if that’s going to happen. He’s super, super talented, but you never know until you go a mile-and-a-quarter. … He’s 4, and he’s only run four times. I really think this will be his toughest test. Not because of me but the other horses in there. It’s probably going to be his toughest race.”