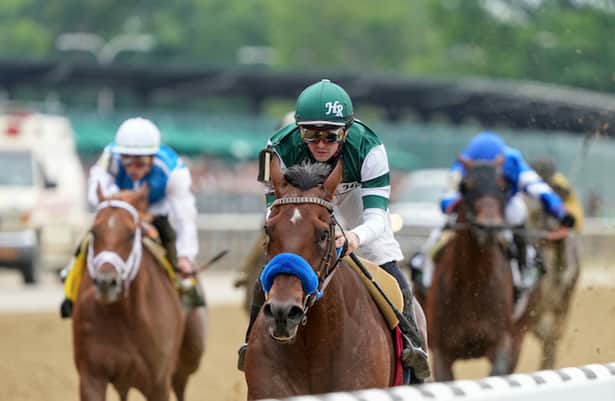 Flightline, a stunning six-length winner of the Metropolitan Handicap (G1) at Belmont Park in his 2022 debut on June 11, topped all Classic contenders with 22 first-place votes and 277 total votes. A 4-year-old son of Tapit, Flightline is expected to make his next start in the Pacific Classic (G1) at Del Mar on Sept. 3. The winner of the Pacific Classic gains an automatic starting position, and fees paid, in the Breeders’ Cup Classic.

Life Is Good is in third place with 210 votes. Last year’s $1 million Breeders’ Cup Dirt Mile (G1) winner, the 4-year-old won the Pegasus World Cup Invitational (G1) at Gulfstream Park in January and was fourth in the Dubai World Cup in his most recent start.

Hot Rod Charlie is in fourth place with 154 votes. The 4-year-old finished second in the Dubai World Cup and was also second in the Salvator Mile Stakes (G3) at Monmouth Park on June 18.

Mandaloun, winner of the Louisiana Stakes (G2) at Fair Grounds in January, is in fifth place with 126 votes. Mandaloun, also a 4-year-old, is expected to start Saturday at Churchill Downs in the Stephen Foster Stakes (G2), which is an automatic qualifier for the Breeders’ Cup Classic.

Mo Donegal, winner of the Belmont Stakes, is the highest-rated 3-year-old in the Rankings. A son of Uncle Mo, Mo Donegal is in sixth place with 121 votes.

Olympiad, undefeated in four starts this year, is in seventh place with 108 votes. Olympiad, a 4-year-old by Speightstown, has won the New Orleans Classic Stakes (G2) at Fair Grounds and the Alysheba Stakes (G2) in his last two starts. He is also scheduled to start in the Stephen Foster.

Three-year-olds round out the remainder of the top 10 in the rankings. Epicenter is in eighth place with 107 votes. A son of Not This Time, Epicenter finished second in both the Kentucky Derby and in the Preakness Stakes (G2). One spot behind Epicenter is Early Voting, who won the Preakness Stakes in his most recent start. Early Voting is in ninth place with 95 votes. Undefeated Jack Christopher is in 10th place with 91 votes. A four-time winner, Jack Christopher has two victories this year, taking the Pat Day Mile (G2) at Churchill Downs and the Woody Stephens (G1) at Belmont Park.

The Breeders’ Cup Classic Rankings are determined by a panel of leading Thoroughbred racing media, horseplayers, and members of the Breeders’ Cup racing directors/secretaries panel. Rankings will be announced each week through Oct. 11.