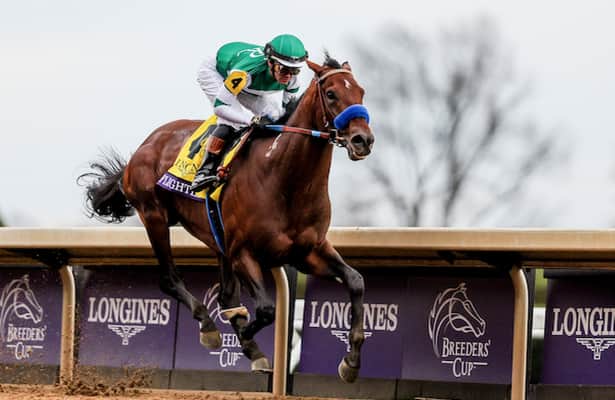 Flightline (139), who closed out his undefeated career in the Longines Breeders’ Cup Classic (G1), maintains his commanding lead in the ninth edition of the Longines World’s Best Racehorse Rankings for 2022.

Get suggested wagers with this weekend's Super Screener

In the Breeders’ Cup Classic, Flightline pulled away from the field to win by a record 8 1/4 lengths. Olympiad (124) was second, while Taiba (123) was another half-length back in third. With their efforts, Olympiad raised his rating to 124 from 120, and Taiba’s rating improved to 123 from 122. Following the Breeders’ Cup Classic, it was announced that Flightline, the highest rated horse in the world, has been retired.

Rebel's Romance (122) also impressed during the Breeders’ Cup World Championships and joins the rankings following his 2 1/4-length win the Longines Breeders’ Cup Turf (G1). It was his fifth consecutive victory and third at the highest level, following wins in the Grosser Preis von Berlin (G1) and Preis von Europa (G1).

Meanwhile, both Equinox (123) and Panthalassa (121) find themselves ranked following their dramatic efforts in the Tenno Sho (Autumn) (G1). Equinox ran down the front-running Panthalassa to win by a length in that contest.

Also joining the latest rankings is California Spangle (121), who has won both the Celebration Cup (G3) and Sha Tin Trophy (G2) this season in Hong Kong.