Flightline is 2-1 after confusion hits BC Classic Future Wager 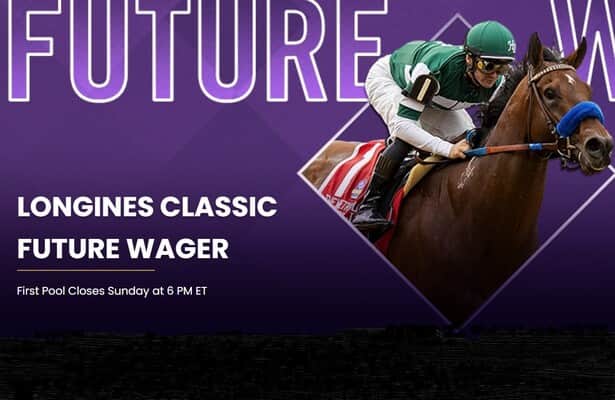 It finished a half-hour later than many bettors were told, and it had two different sets of what appeared to be closing odds before Flightline was confirmed Monday afternoon to be the 2-1 favorite.

A winning $2 ticket on Flightline would pay $4.98, the most it could be under the new penny-breakage law in Kentucky. The Breeders’ Cup will be held in November at Keeneland in Lexington, Ky.

Before the Breeders’ Cup verified the final odds and payouts Monday afternoon, uncertainty was fueled when advanced-deposit wagering platforms NYRA Bets and TwinSpires agreed on one set of figures for the win pool, but Xpressbet showed another that was completely different.

At NYRA Bets and TwinSpires, Flightline closed 2-1 and attracted $49,332 of a total handle said to have been $205,249, numbers confirmed Monday afternoon in a Breeders’ Cup news release.

Of the 24 choices available to bettors, Xpressbet differed with NYRA Bets and TwinSpires on the closing odds for 20 of them.

“NYRA Bets has no insight into the nature or cause of the apparent discrepancy in the Breeders’ Cup Classic Future Wager,” New York Racing Association spokesperson Pat McKenna said in a written response Monday morning. “We have received no customer complaints on the matter.”

Xpressbet executives had not responded by Monday afternoon after being asked for their view on what happened.

Once the dust settled, it became evident that Flightline missed 5-2 odds by the thinnest of margins under penny breakage. If they were to cash Flightline tickets from the first pool of the Classic Future Wager, players would get back $3.49 for each $1 bet rather than the $3.40 it would have been had the host track been outside Kentucky.

The confusion over the differing sets of odds Sunday actually was triggered near the end of betting. The Breeders’ Cup confirmed it errantly had announced two different times – 6 p.m. and 6:30 p.m. EDT – for the Classic Future Wager to end.

“There was an inadvertent discrepancy in publicly stated closing times for the Breeders’ Cup Classic Future Wager,” said a written statement that was issued late Sunday night. “As a result, the pool was kept open until the latest published time (so) as not to shut out any horseplayers. We apologize for any confusion caused to the betting public.”

Both NYRA Bets and Xpressbet showed “0 MTP” (minutes to post) in that final half-hour. Then they finally showed the “OFF” label to indicate betting was closed. They apparently kept accepting wagers akin to a race experiencing post-time drag. That is the term often used at tracks to refer to the time between the toteboard showing “0 MTP” and the actual opening of a starting gate. It was not immediately known what TwinSpires had displayed.

Ultimately, none of this will impact the payouts on winning tickets after the Nov. 5 running of the $6 million Classic. But bettors using what might have been incorrect live odds and pool figures as a gauge, or those expecting a 6 p.m. closing, might have been misled into making what they thought were timely wagers based on late value that was a mirage.

Flightline got the endorsement of bettors in spite of his abbreviated record. Trained by John Sadler, he won by six lengths in the June 11 running of the Met Mile (G1), his only race since Dec. 26 and only the fourth of his career. He is being trained up to a next start Sept. 3 in the Pacific Classic (G1) at Del Mar.

Life Is Good, who won Saturday’s running of the Whitney (G1) at Saratoga, shortened from 10-1 Friday to close as the 6-1 second choice.

Epicenter, who was second in the Kentucky Derby and Preakness before winning last Saturday in the Jim Dandy (G2) at Saratoga, wound up 7-1.

Only win bets were taken in this Breeders’ Cup Classic Future Wager.

A second and final pari-mutuel futures pool will be conducted through the same national betting platforms during the extended Labor Day weekend. The Breeders’ Cup news release Monday indicated a later closing time, saying it would run from Friday, Sept. 2, at noon EDT to Monday, Sept. 5, at 6:30 p.m.

These turned out to be the final odds, payouts and handle with the $2 will pays confirmed by the Breeders’ Cup and the other figures shown at NYRA Bets and TwinSpires: