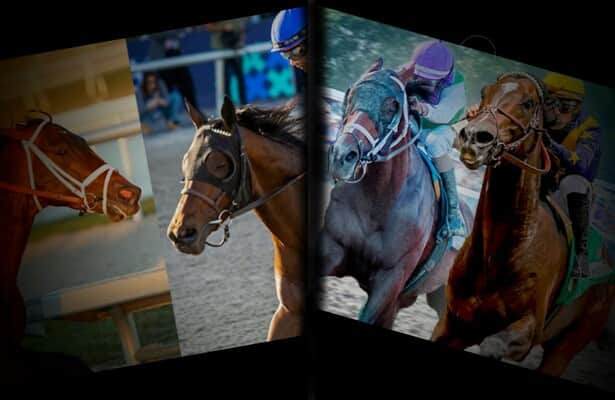 The late Jess Jackson – the winemaker and horse owner, not the progressive activist – used to be at once a catalyst for trenchant discussion and a lightning rod for polarizing criticism. Actually, that could apply to both Jacksons, right?

As a pair of must-see races come to pass this weekend at Churchill Downs and at Belmont Park, I cannot help but hear the words of the man who campaigned great horses like Curlin and Rachel Alexandra.

“Champions need to race against champions.”

Past circumstances aside, Jackson’s champions vs. champions credo may be just what racing needs to put its current troubles in proper perspective.

At some point, real races with real horses matter. They matter a lot. They can overshadow government gymnastics and tattered Kentucky bluegrass. While we wait for both the Horseracing Integrity and Safety Act and the Churchill Downs turf course to take hold, honest-to-goodness duels are in the spotlight right now. At least they should be.

When team Juddmonte decided to keep Mandaloun at home in Kentucky to race Saturday in the Stephen Foster (G2), that meant the dawn of a rivalry with three-time graded-stakes winner Olympiad. We certainly paid attention while Mandaloun conspicuously rose above the Medina Spirit din to be awarded the Kentucky Derby trophy nine months after he ran for it. In the time since, Olympiad has quietly but convincingly put together a perfect 2022 with his four wins coming by a combined 13 lengths. Now they meet. Jackson would have loved it.

It was Sunday night when a New York Racing Association spokesperson posted a Tweet saying Speaker’s Corner would bring his 114 Beyer to challenge two-time Grade 1 winner Life Is Good in Saturday’s John A. Nerud Stakes (G2). That created a ripple that Jackson would have envied at the dawn of social-media trending.

Champions? Not yet. But Mandaloun vs. Olympiad and Life Is Good vs. Speaker’s Corner are the stuff for which Jackson used to wish. Four really good horses who are racing past age 3. Just like Curlin and Rachel. And Rachel’s unrequited rival Zenyatta.

With the noteworthy exception of Zenyatta’s owner Jerry Moss, most of Jackson’s contemporary rivals could not wait to get their horses into their big-money second careers. Many of those rivals looked at Jackson’s calls to prioritize racing longevity over hasty breeding as sometimes hypocritical admonishments. But that was their problem.

Zoom ahead more than a decade since Jackson’s passing to see how we still take the positives of actual horse races for granted while accentuating the negatives in the sport.

There is a loud chorus of opinion that says racing will die if the federal mandate of HISA does not work. That shrinking field sizes and doping and cheating and indictments and court cases and catastrophic breakdowns will render the game extinct. That every racetrack is nothing more than a multi-million-dollar real-estate sale waiting to happen.

Aren’t these the same collective voices who said for more than a generation that a Triple Crown winner would bring hordes of fans back to racing?

This eternal cacophony is seldom in touch with reality. American Pharoah and Justify did not trigger a racing boom. Nor have all the crises that have fueled critical hyperventilation taken down the sport.

The caterwauling about all the things that will kill racing has been going on for so long, it probably inspired Chicken Little.

More than 100 years ago, a church-led backlash against gambling led to a state-by-state ban on bookmaking. That ignited dire predictions that racing was a dead sport walking. Then pari-mutuel betting came along in 1908 to save the game.

Still, some things never change. There was and is a public perception that racing was and is a sport full of outlaws.

“If racing officials were more active and sincere, crooked horse racing could not and would not be attempted.

That was part of a letter sent on behalf of something called the National Reform Organization to members of Congress considering legislation to ban horse racing. It showed up in Daily Racing Form in ’22. That would be 1922.

Thankfully, that effort did not go far, especially since everyone from D.C. power brokers to the American public were caught up in the stars of that generation. Man O’ War. Sir Barton. Exterminator. They also had the fresh memory of the beloved national pastime – baseball – being scarred by the Black Sox scandal of 1919 that, of course, was going to wipe out that game.

The lesson here was the positives of racing outweighed the negatives back then, and they have stood the test of time.

By the way, in case it escaped the notice of trigger-happy Tweeps, there have been efforts to fix what is wrong with racing. They have not been perfect, and yes, they are worthy of critical commentary. But not so much that they completely overshadow what got us here in the first place. (Spoiler alert: That would be actual horse races.)

Just think of the possibilities of who and what we may see in the second half of 2022. Malathaat vs. Clairière vs. Letruska. Epicenter vs. Mo Donegal vs. Jack Christopher. Secret Oath vs. Nest vs. Echo Zulu vs. Kathleen O. Flightline vs. Life Is Good vs. Speaker’s Corner. This does not even take into consideration the turf divisions that will be sprinkled with European horses who come to Keeneland in November.

It is not just the Breeders’ Cup. This weekend provides hope that what Jess Jackson wished for and called for – and was criticized for wishing and calling for – actually can occur from time to time.

Even if these showdowns never happen, aren’t the possibilities more fun to talk about than the flaws in the HISA website or the divots in the lawn at Churchill Downs?

After Curlin was awarded the Horse of the Year trophy for 2008, Jackson sat across from Big Brown’s owner Michael Iavarone for what was a friendly but frosty session with reporters covering the Eclipse Awards in South Florida. It was the punctuation mark on months of effort to put two eventual champions together on the racetrack before Big Brown suffered a career-ending injury.

Asked about the failure to make that duel a reality, Jackson mused that there still was something positive that came out of the proposals and rejections.

“We need that kind of debate to excite the fans and to bring out the best,” Jackson said. “This industry needs new owners. This industry needs partnerships. It needs the excitement of great marketing returned. ... We have to elevate the quality and respect of the world for American racing.”

As Jackson might have said, there is no greater marketing of the sport than a good rivalry between equine stars. Two new ones may be born this weekend.

Think of it this way. In a stretch of a little more than three hours, it will take fewer than four combined minutes to watch Life Is Good take on Speaker’s Corner and Mandaloun against Olympiad.

Certainly, in our busy schedules chock full of sniping and growling, we can spare four minutes.