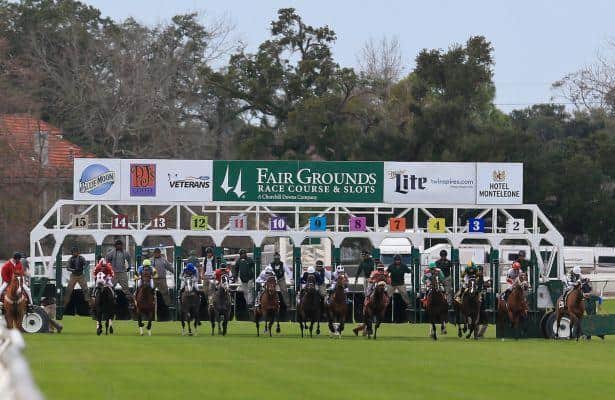 Here comes an old-school column, the kind that should leave fingers stained with that infernal ink and broadsheet newsprint dotted with rings from coffee cups.

While waiting to see the first trending video of a pre-dawn brawl among crazed shoppers storming the citadels that are suburban malls, this is an admittedly lazy assemblage of random thoughts, old notes and perhaps an unidentifiable receipt from a long-forgotten road trip. (Did I really spend $35 on a burger and beer while waiting for a canceled flight?)

The grass is always browner. That pile-on Thursday was not from a loose ball in one of the NFL games, which actually were entertaining for a Thanksgiving change. It came when Fair Grounds said its turf course was in such bad shape, it would be unsuitable for competition for at least another month. Well déjà Churchill vu. Can the home office of racing figure out how to grow a blade of grass? Words to that effect were banged out by many on Twitter, which did not die the death I forecast last week. The common denominator of Churchill Downs the Inc. is an easy target. But it seems to me the situation at Churchill Downs the track, where $10 million worth of 2021 model turf finally is starting to look strong, is completely different from what is going on at the satellite campus in New Orleans. According to Daily Racing Form, salt water got in the well that is the irrigation source for the Fair Grounds turf course. I am no agronomist – and neither are most chirping Tweeps – but that seems like it would be good for kelp and bad for lawns. It is awfully easy to put a corporate monolith on a batting tee and swing away, but these feel like two completely different problems.

Not so fast, my friend. This is not to let management off the hook for the not so fair grounds at Fair Grounds. Horsemen say they were assured last month by track management that the grass really would be ready for prime time when the 2022-23 meet started last week. So in they moved with all their horses. Now the turfers find themselves all shoed up with nowhere to go. It is understandable that trainers might be muttering that old line about writing a check with your mouth that your backside can’t cover.

Hard hat required. Back to Churchill Downs the track. There has been so much construction going on there during the fall meet that it is hard to remember where to walk without coming up on a temporary fence. I suspect I will not recognize the place come spring, but here is a thought. When ParisLongchamp was being rebuilt in 2016 and 2017, there was a live webcam to let curious onlookers gaze at what was going on every hour of every day. It was like a cyber peephole through those plywood barriers that otherwise block the view of a new building going up in the big city. Here is hoping the finished product at America’s track is better than it wound up being in France.

The ghost of Bernie Madoff. The nadir of the annual ebb tide of big-name retirements actually came early this month when we learned Flightline and Life Is Good and Epicenter and Malathaat and Cyberknife were done racing. We got a late dose this week with 2021 champion Ce Ce and 2022 Breeders’ Cup winner Tuesday being declared broodmares. Reports say Ce Ce will be paired with Constitution and Tuesday with Justify. As racing fans we are asked every year to get used to this, but where does it end? If the track stars of today are turned into moneymaking breeders in the name of creating tomorrow’s racers, it feels like a scheme in danger of collapsing one day because of a weak foundation, especially as tomorrow’s runners may follow the lightly raced leads of Justify and Flightline. Put it another way. What is it called when yesterday’s investors profit only because of new money solicited from today’s buyers? At some point, the number of new buyers is tapped out, and there is nothing to make existing investors whole. Change “new buyers” to “retiring racehorses.” Voilà. Doomsday. But hey, I was wrong about Twitter.

Where are the horses? I just watched the first episode of “Tulsa King,” mostly on the promise there would be a racing angle at some point. The Springboard Mile, a scant 100 miles from Tulsa, was mentioned in a trailer and in the premier. And that was that. It was just one of the many plot teasers in the first hour along with a criminal past, a lost family and a new love interest. There are nine episodes left on Paramount Plus, including the second one that is out and on my to-do list. Now for the usual review patter. Sylvester Stallone plays a charismatically violent, fresh-out-of-prison, exiled gangster, even if his newly hired driver is not allowed to call him that. The parallels with “Yellowstone” are no accident since Taylor Sheridan created both. I feel like Stallone’s character may pick up the torch Dustin Hoffman carried in the old HBO series “Luck,” which came and went a decade ago. The similarities between their capo characters are hard to miss. “Tulsa King” looks like it is worth watching again, no matter how long it takes them to get to Remington Park.

The cheap speed of fall. Autumn here in Kentuckiana lasted about 36 hours. Two mornings after enjoying a beverage in a tony, outdoor saloon on a beachy afternoon in fashionable St. Matthews, it was snowing. Since summer stretched so late, and winter started so early, I barely had time to realize that come Sunday, racing in my back yard would be done until April. I could drive over to Turfway Park, but it is not the same as Churchill and Keeneland. Not with that rubber stew, which is was what not-so-long-ago New York turf writer Ed Fountaine used to call fake dirt. Since travel south may or may not happen this winter, I will be jonesing at some point to see horses up close in the next few months. Someone just needs to convince me why I should get a taste of Tapeta again.