Flatter: Some of racing’s bad habits are really hard to break 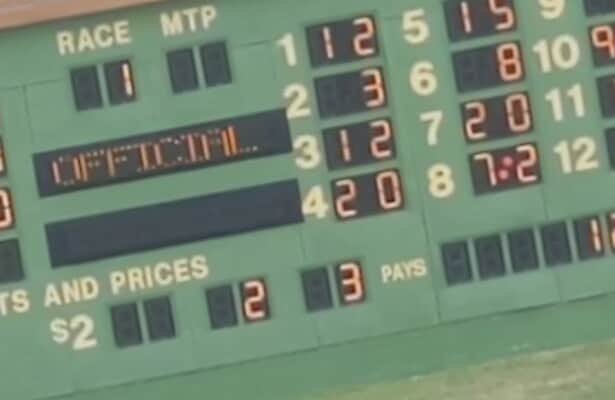 Caution: Some facets of horse racing may be habit forming.

Not to worry. This is not a warning label on behalf of those 1-800-Gambler type hotlines, the ones required by law in some states that approved sports wagering in the past 4 1/2 years. Those may be left to the sped-up voices at the end of commercials starring Charles Barkley and J.B. Smoove.

This, instead, is about the more mundane, repetitive idiosyncrasies that are baked into our sport. Some are good. Some are not. There is bound to be more than a bit of disagreement about these, because one man’s tradition is another man’s annoyance.

Right there. That should have said “one person’s,” not “one man’s.” Some habits are hard to break. But if racing is serious about reaching out to a younger audience, maybe some of the crutches of an older generation must be tossed away like junk in the email. Especially the misogynistic ones.

In an era when more and more of us are betting on our phones and tablets rather than standing in line in hopes of getting to a betting window before being locked out, is it still necessary for track announcers to say, “Hold all tickets”? If we ever got to the point of mutilating our iPhones before the finish-line photos come back, there still might be a demand for that warning.

Something else the announcers say. “It’s official.” When I lived in Australia the term was “correct weight.” Same thing. But unlike Australia, we have taken a term that began in racing and applied it to everything in life. Everything.

“It’s official. We are painting the bathroom blue.”

How we write about racing also could use a once-over. Around here at Horse Racing Nation, we encourage our team’s writing to look less like term papers and more like the New York Daily News. But even that is an admittedly geezerly example using a medium that is dying so that more trees may live.

Written stories about races too often fall into an old-school template that has turned into a new-school rut. I remember a writer telling me once that every horse’s name should be preceded by that of its owner, “because that’s who pays the bills.”

Really? I will be damned if I do a story about the horse of the year from 2022 and have to say “Hronis Racing, Siena Farm, Summer Wind Equine, West Point Thoroughbreds and Woodford Racing’s Flightline.” Imagine if that were the practice in the NFL. “John Mara and Steve Tisch’s New York Football Giants defeated Avram Glazer, Bryan Glazer, Darcie Glazer Kassewitz, Edward Glazer, Joel Glazer and Kevin Glazer’s Tampa Bay Buccaneers.” I don’t think so.

If every owner involved with MyRacehorse had been listed whenever Authentic or Monomoy Girl was mentioned, it would look like that anachronism known as a phone book.

A relatively new complaint heard often at racetracks is the one about saddle cloths being the same color on all the horses in a given race. To me that is a canard. As long as the jockeys are wearing different colors, it should be fine. Besides, what did we do decades ago when the saddle cloths and the TV images were monochromatic? Somehow, with the bigger fields of yesteryear, we did just fine.

Speaking of TV, back when races were televised in standard def with oversized cameras and undersized lenses, our demands were simple. Just give us a picture of the track that was stable enough not to require us to reach onto the back of that warm box containing the picture tube in order to adjust the horizontal hold. The kids not knowing about that are so spoiled.

Now, though, we have been pampered with high-def images and the ability to put cameras everywhere, even on the jockey’s helmets. So why is it so hard to keep the races framed consistently? Whenever producers and directors switch from camera to camera in a race, it is difficult to follow individual horses. It would be like switching cameras in the middle of a pass in a football game. Where did the ball go?

Just give me the simple pan angle from high above the finish line. The key word there is high, apparently a forbidden, four-letter word at Saratoga, where the main camera seems to shoot the races from a submarine off the coast of Seabiscuit Lane.

While I am at it, why must there be so many trees on the infields of racetracks? Fair Grounds may be the worst. We have to presume what is going on through so much of the backstretch in New Orleans. That was what crossed my mind when saplings were planted at Keeneland to honor the late Queen Elizabeth II. The well-intended memorial of today will be the accidental obstruction of tomorrow.

At least it is not like Churchill Downs, where the view from the grandstand of the mile chute is blocked by a relatively new wall. Or at Del Mar, where the start of seven-furlong races is best seen from I-5 than from the most expensive seats in the house. Or at Pimlico, where temporary infield structures during Preakness week made the fog superfluous during Justify’s win in 2018.

It is not just the sights of racetracks. It is the sounds. How rare is it that the music playing on the public-address systems comes from this century? The cleaned-up version of Bebe Rexha’s “I’m Good” worked for the Detroit Lions on Thanksgiving Day. Why not at Gulfstream Park or Santa Anita in December?

To paraphrase something former NBA center Andrew Bogut told me, how about updating the music to something from a year that starts with a “2”?

Not everything that is old is bad. Whether it is the NFL’s collection of balding, grass football fields or the troubled turf courses in Kentucky and Louisiana, it seems like grass was better in the old days. Doesn’t it feel like all the new turf technology has been one big exercise in overthinking and underseeding?

Finally, just because it feels like a high note is overdue here after all this kvetching, here is something that horse racing gets right far more often than it gets wrong. That is the grading of the aforementioned tickets and the payouts to the winners. We may not like takeout or batch betting, but the results usually are clear cut.

This was as true now as it was 22 autumns ago, when the Bush-Gore election lacked an undisputed winner. Not knowing what was to come two decades later between Biden and Trump, Brent Musburger wondered out loud why state governments did not look to the obvious solution to all their polling squabbles.

“I know places that take votes every half-hour,” he said on ESPN Radio in November 2000. “They tabulate the results quickly, and they are declared final without any arguments. Why not have racetracks run our elections?”

A better idea rarely has been heard since.