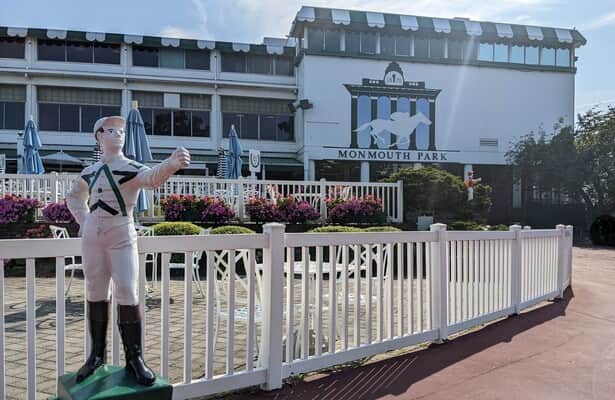 As postal employee Newman said in 1996, “Nice place you got here, Kramer. A man can really get some thinking done.”

In the spirit of Cosmo Kramer’s borrowing the Seinfeld crib, the nice place that I borrowed was the more than 1,500-mile drive last week from Louisville, Ky., to Oceanport, N.J., and back.

With breaks for meals and rest-stop naps, it took me about 16 hours to drive each way on my mission to cover the Haskell at Monmouth Park. That was much better than the 28- and 33-hour delays I endured this spring while airlines apparently embraced the new policy of letting pilots work from home.

Other than the Northeast corridor, which is as much under construction in the summer as it was when I used to live there, the drive was an absolute pleasure. Think Jack Kerouac without the ganja.

And yes, a man can really get some thinking done on the road.

Fixed odds. I wrote a big piece about them Thursday, and my interview with Dallas Baker of BetMakers (a Horse Racing Nation sponsor) is part of my Friday podcast. I heard some scoffing about the new pool from some of my fellow AARP candidates last weekend. “They aren’t that much different from the ‘regular’ odds,” was the microcosmic quote. That was like hearing someone say “gas is only five cents a gallon cheaper over here, so why bother?” These are the same voices who whimper about computer bettors crushing their 7-2 horse into a 4-5 favorite at the last click on the toteboard. Maybe it is because it takes a little more effort to watch the odds fluctuate between the pari-mutuels and the bookmakers. God bless the Luddites. Maybe they were content getting Cyberknife at 7-1 the old way rather than the 10-1 they could have had the new way. Meanwhile, the rest of us will enjoy having more attractive betting choices.

Tracks en route. There weren’t any. At least none that would have worked for me. I could have made a case for going to Colonial Downs on the way home, but the endless heat wave led to the cancellation of Monday’s card. That would have added another 1 1/2 days to the trip anyway. Going east, a visit to Charles Town could have happened, except the track was closed Wednesday. Mountaineer was on the way back Sunday, but that would have gotten me home at about 4 a.m. Harness racing at the Meadows could have beckoned, but I had been there and done that 26 years ago with a few members of the Florida Panthers hockey team. In their case it was the hooky team. I went home with nothing. They went home with some extra cash and the Prince of Wales Trophy.

Cyberknife. His Haskell win last week added even more chaos to the 3-year-old male division. Walking with trainer Brad Cox back to the elevators outside the Monmouth Park parterres (I do love that word), he asked me if I had a vote to determine who was No. 1. For the Eclipse Awards at the end of the year, yes. For the weekly polls, no. I told him those tend to be “flavor of the week” votes, and he agreed. For me, the survey that really counts is conducted by bookmakers who write futures. Now that he has qualified for the Breeders’ Cup Classic, Cyberknife was posted suddenly by one international book with odds of 16-1 to win the race. Five older horses – Flightline, Life Is Good, Olympiad, Country Grammer and Hot Rod Charlie – carried shorter prices. Among the foal crop of 2019, injured Belmont Stakes winner Mo Donegal had the shortest odds of 14-1, even though he was ruled out of the Breeders’ Cup by trainer Todd Pletcher. Then at 16-1 came Cyberknife, Charge It, Epicenter and Taiba. Cox said he thought Epicenter was a top-five horse in the division. It looks like one bookmaker and its bettors agree. That carries more weight for me than a bunch of my fellow media types. Hey, wait a minute. Where are Rich Strike and Early Voting?

My gates of paradise. Made it home to the farm after a great week on Saratoga live for ?@TheNYRA? on ?@FOXSports? pic.twitter.com/OA7sWpztJj

Mig Tweets. I feel badly for anyone who does not embrace the good karma radiating from the Twitter account of jockey-turned-TV analyst Richard Migliore. The love of his family and his farm and nightly walks and just the blessings of his life inspire the photos he posts. I dare anyone not to feel better taking a vicarious trip with him @mig4450.

Small fields. Del Mar acolytes are crowing about the big fields for the best races at the junction of turf and surf. They point with derision to Saratoga and the six-horse Diana and Vanderbilt and the five-horse CCA Oaks and Jim Dandy. A few things are at play here. Yes, the shrinking foal crop is as ever a challenge. The removal of Lasix from most stakes is another that is not talked about so much. Pletcher has mentioned the high cost of entering races at New York Racing Association tracks. I will throw in one more thing. With apologies to Los Alamitos, Southern California stakes candidates had a long break between the end of Santa Anita and the start of Del Mar. The early part of the summer meet was bound to get more entries from trainers anxious to get their horses out of the barns and onto the track. Let’s see how those fields look in another month.

Here it is!! The obligatory ‘bridge’ shot ?????? #Saratoga @1FastColt pic.twitter.com/BTlTr5UavO

Bridges. Since when did the photographing of bridges become such a thing for racing fans? The pictures are all over social media this summer. Not just the rust-colored arches on the way to Saratoga, easily the most popular span on racing Twitter. I, too, have fallen prey to the half-joking urge to post photos of less attractive bridges, the likes of which are all over the Ohio River around Louisville. Oh, for the uninitiated, that I-87 crossing on the way to Saratoga is the Kosciuszko, and it goes over the Mohawk River. While I am at it, ever heard of the Outerbridge Crossing between New Jersey and Staten Island? It honors the first chairman of the Port Authority. His name was Eugenius Outerbridge. No lie. Of course, they were not going to call it the Outerbridge Bridge any more than those races at Gulfstream Park and Pimlico were going to be called the The Very One Stakes.

The bridges (and tunnels) of a racing drive to and from @MonmouthPark. pic.twitter.com/rqK4CiTP5m

Seventh race. That topic trended on Twitter while I was driving home. It was the case of the gate that was slow to be moved Sunday after a start at Saratoga, so an outrider effectively red-flagged the race. (By the way, why don’t they have actual red flags? They do in Europe.) I found it interesting that the warning without hesitation to the jockeys was praised as prudent, but the veterinarian who tried to take Modern Games out of the Breeders’ Cup Juvenile Turf last fall over a gate incident was crucified. Consider this. If the outrider had hesitated, and if the gate had remained stuck on the Saratoga grass, he would have been vilified. Likewise, if Modern Games actually had gotten hurt at Del Mar, the vet would have been seen as doing the right thing. The fickle finger of fate, indeed.

Hershey. I never had stopped before in the Pennsylvania city that is home to America’s most famous chocolate and the dubious upbringing of Don Draper. I strongly recommend the Iron Hill Brewery for lunch and the kitschy photo ops that are the chocolate-kiss street lights. But $25 to drive into Hersheypark? I just wanted to see the building where Wilt Chamberlain scored 100. Points, that is. No, thanks. That is the sort of money one would pay for services rendered at Don Draper’s childhood home.

This can be only one city in America. pic.twitter.com/nwe3Kils9C

Assiniboia, oh, boy. The bureaucratic declaration from north of the border this week was not actually part of my drive home. But it seemed appropriate for getting some thinking done. Jockey Sheldon Chickeness was ruled by the Manitoba LGCA to have done nothing wrong July 20. That conclusion was met with slack-jawed astonishment. All Chickeness did was ride a horse to the lead, then stop riding, then start again and then finish second. A statement said, “The LGCA determined that no rules of Thoroughbred racing were violated.” Never mind that. Did we all notice what LGCA stands for? The Liquor, Gaming and Cannabis Authority.

Maybe one of Jack Kerouac’s old habits wafted its way in here, after all.