Flatter: Racing does right by horses in reaction to herpesvirus 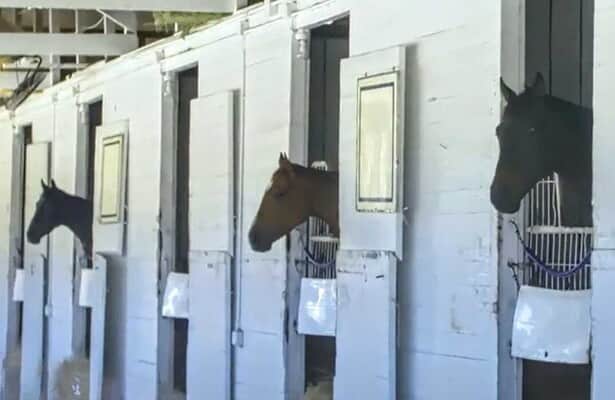 If the equine world communicated the way us mere humans do, the breaking news this week might have cascaded like it did when Rudy Gobert tested positive for something called the novel coronavirus back on March 11, 2020.

At least Saffie Joseph Jr.’s filly did not go around licking microphones before she was red-flagged for the equine herpesvirus.

What we learned in the nearly 1,000 days since Gobert’s flashpoint COVID case might give us perspective on how racing – its humans, that is – reacted to this week’s quarantine on the backside at Churchill Downs.

Yes, by the way, it really has been almost exactly 1,000 days since the Gobert red flag led NBA commissioner Adam Silver to halt sports on the whole planet. We reach that milestone Tuesday.

Actually, not all sports stopped, right? There was table tennis in Eastern Europe and baseball in Korea and Taiwan. And Australian rules football found its way into what might have been the first isolation zones called bubbles.

Oh, yes. There was horse racing, too. It might have been slowed down by outbreaks of COVID among stable workers. But the horses kept running, because they had to keep running. The idea of four-legged animals sitting in recliners, binge-watching TV and learning how to use Zoom seemed impractical.

Not to be the guy who disperses the conversation at a cocktail party with an unwelcome non-sequitur, but it says here when equine diseases break out, racing usually gets it right.

I feel like I just shined a happy light on what usually is the goth subculture that permeates this sport. We are obsessed, you know, with grousing about what is wrong with it. As one reader asked me once in the comments, “Why are you so bitter?” That answer would cost me $300 per hour. Well, per 50 minutes.

Fonner Park in Nebraska went through this. Actually, pick your “this.” It could apply to its reaction to COVID and to its response to an outbreak last March of the equine herpesvirus.

Lacking any other action of any kind in North America, gamblers gravitated to Fonner and to Will Rogers Downs in the spring of 2020 and poured in millions of dollars in wagers that otherwise would have gone to the basketball and hockey and baseball games that were called off. Unfortunately, racing’s economic model funneled most of that found money away from Fonner Park and back through nationwide betting platforms. But team Fonner still stepped up.

Almost exactly two years later, the track was hit with the herpesvirus, and more than 100 horses had to be isolated in their barn. Two horses were put down, and two more tested positive but apparently recovered.

That was the extent of the fallout. Three weeks later, thanks to the swift response of track management and the state veterinarian and the tryout of an experimental drug that was developed in Arizona, Fonner Park was back to business as usual.

“In 2020 we didn’t become known as the little track that could because we gave up,” Fonner Park CEO Chris Kotulak said in a statement to the Lincoln Journal Star in Nebraska. “Instead, we galvanized to succeed.”

Parx Racing in Pennsylvania had its own herpesvirus case at the same time as Fonner Park’s. One horse died, but it appeared there was no further outbreak after two barns were isolated. Eighteen days later, the quarantine was lifted.

Horsemen and horsewomen all have been educated about what to do when this sort of thing happens. Limit the movement of the animals who may or may not have been affected, keep resting and testing them, and wait for the virus to run its course.

It is a bit easier with horses, who are more easily isolated in their barns, than it is with humans, who do not tend to enjoy being confined to restricted areas outside VIP rooms and sleeping bags made for two.

Since horses always make life better for humans, guess which species gets the relationship wrong more often than not? That is why it is especially gratifying that Churchill Downs has done the right thing through all this.

For the corporate haters, yes, those words actually spilled into my keyboard and out on your screen. Churchill Downs has done the right thing.

Dr. Will Farmer, the company’s equine medical director whose résumé includes work with the California Horse Racing Board and the Breeders’ Cup, was readily available for information when the situation began to flower. All in all, the news flow has been pretty good, although it seems like it would be useful for backside workers to know the names of all the horses who tested positive.

Seriously, it is a safe bet that no one is screwing around with this. Even though most horses get over the No. 1 variety of EHV, that is only because their human handlers drop everything to make sure they do.

I know someone will tell me about something around the edges did not go right. I am sure Greg Foley, who trains O Besos, would like to have known his horse would be turned around and sent back to Kentucky before the trailer was loaded and dispatched to New York for Saturday’s Cigar Mile.

Hopefully, the game gets through this quickly as it has with other outbreaks of the herpesvirus. And yes, it happens again and again, just like COVID keeps coming back. And the common cold. And the flu. At least we have avoided the ultimate horseman known as pestilence.

A cautionary tale is out there. Australian racing was thrown for a loop for the last four months of 2007 after an outbreak of equine flu affected 47,000 horses. Once again, racing in particular and the government as a whole got out in front of this and limited the damage.

Rare though it may be in our game, high praise is deserved right now – and not for the first time. When Parx waded through herpesvirus cases in 2013, Pennsylvania state veterinarian Craig Shultz said, “Racetracks have actually done very well with this. Better than other equine industries.”

Too bad the same unified successes cannot be found to tamp down the outbreaks of high takeout, batch betting, medication abuses, turf mismanagement, timing problems, stewards’ inconsistencies, crop restrictions, careless riding and social-media slander. If only there were a higher authority for all of racing, ahem.

But one paragraph of negativity is enough. Hey, the holidays are coming. Deck your halls, light your candles, and tell your tree to get flocked. It’s the most wonderful time of the year. Even though there is a little ways to go on the current challenge that literally has gone viral, there is reason to be optimistic about how this story will end.

Come to think of it, I had forgotten that Rudy Gobert tested positive again for COVID. Yeah, about 11 months ago.

Maybe us humans are making progress, too.