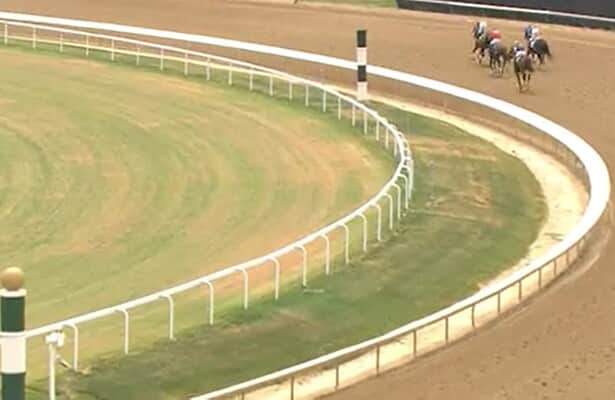 There was a time long ago when the phrase “keep off the grass” was reserved for temporary placards jammed with spikes into newly planted front lawns in suburbia.

This weekend’s version of “keep off the grass” might be uttered as an “I told you so” after the orphaned Arlington Million and Beverly D. are run Saturday on the troubled turf course at Churchill Downs.

“Troubled turf course.” That is becoming as overused a term as “crafty left-hander,” “talented actor” and “Horseracing Integrity and Safety Authority injunction.”

It is a $10 million problem that Churchill has on its hands. Or at its feet. That was how much it cost last summer to rip out the old grass course, widen it and replant it. As fate, uncooperative weather and maybe some bad seed would have it, the turf has not taken root quickly enough.

Some recognizable backside folks who know their names will not be used here spoke freely and critically about it.

“It’s just not very hearty,” one trainer said this week. “After they run those two races on Saturday, it’s going to be a mess.”

Others who are more optimistic with their caution do not mind being quoted on the record.

“It looks to me right now like it’s as good as it was Derby week,” trainer Brendan Walsh said. “It was about a week afterward when things started to get chewed up.”

“It looks fine to me,” Dallas Stewart said. “We know it’s still a young turf course. For two races it’s going to be all right.”

Call it a consensus of uncertainty.

One seasoned jockey who knows Churchill inside out punctuated a conversation this week with a grimacing eyeroll when asked about the grass, saying, “This is all about greed. I’m worried. I’m just hoping something bad doesn’t happen.”

It did happen June 10. In the second race on that wet Friday afternoon, a 3-year-old colt named Gingrich took the lead coming down the middle of a track rated firm. And then he took a bad step and nearly buckled.

“Went wrong then pulled up and vanned off.” That is what the Equibase chart said. Gingrich did not survive his injury. The following day, racing at Churchill was taken off the turf for what turned out to be the rest of the meet.

Since horses are seldom available for comment, we cannot know for sure whether Gingrich was experiencing some other problem that had him cruising for an unfortunate breakdown – bad track or not.

Watching a replay of the race, it was evident the turf might have been firm with regard to how solid the ground was beneath it, but divots were plenty. It looked that way for at least five of the six weeks the turf course was used for races, especially in the strips where the starting gate was rolled on and off. As Al Michaels once said of a similarly torn-up path of grass at old Giants Stadium, “It looks like a tee box at a public golf course.”

Better to break a wooden tee than a horse’s leg, and that will be the mostly unspoken fear lurking in the back of so many minds Saturday. It just seems that the running of two – and just the two – turf races will end up being an exercise in breath holding for a collective 3 1/2 minutes.

There are more than 1,500,000 reasons why Churchill did not completely scrap the Million card this year. Not just the collective dollars invested in the purses but also the fact the Beverly D. is a qualifier for the Breeders’ Cup Filly & Mare Turf.

More important was the incoming revenue that was dependent on the very holding of this pop-up day of racing. For all the brandishers of social media who snorted about a boycott of the displaced Arlington Million, there will be thousands more who will tote dollars when they show up in their stead.

Face saving also is at play here. Churchill’s closing of Arlington Park was anything but elegant. The decision to eschew a gaming license and sell land out from under its raison d’être came during a bitter contract dispute between track management and Illinois horsemen. That persisted through the onset of COVID, which kept horseplayers from spending money in the track’s simulcast center throughout 2020.

Churchill clearly wanted to preserve the good name of the Arlington Million even as it sullied the race by hauling it out of its spiritual home and taking it where the grass is not necessarily greener.

“They should have created a three-day meet at Arlington and held it there one last time,” a jockey said this week. “I hear the grass still looks great.”

By most accounts, Arlington Park appears pretty much the same now as it did when it was abandoned last fall. Some of the poles to mark the racecourse’s halves and quarters and eighths and sixteenths of a mile are missing. Actually, though, they began to disappear even before last year’s meet ended. They probably look great in attics now.

Since the Chicago Bears have not finalized their buying of those 326 suburban acres, Churchill Downs theoretically could have gone back in this weekend just to get through the Kentucky grass blues. But that does not necessarily mean everything would have worked when the gates were opened and switches were turned on. A hard winter and a hot summer have a way of fouling up exposed electronics.

More awkward would have been the heaping helping of humble pie served to executives of Churchill Downs Inc. Those men and women were branded as stubborn for turning their backs on Illinois racing, not to mention close to a century of history and tradition at the nicest facility of its kind in the country.

The same just desserts were at the ready had Arlington Million day bugged out to yet another venue. Marty McGee of Daily Racing Form was first to report that Ellis Park and Keeneland had been considered.

A couple knowing folks told me Ellis Park was rejected because the grandstand was too small to accommodate a Million day crowd. Keeneland was said to be a non-starter, because the requisite check in the mail from Churchill would have had all the good feelings of an alimony payment.

It was about 1 1/2 months ago when I asked Jill Byrne, the vice president of racing at Colonial Downs, if the Million could be moved to Virginia, what with CDI buying the company that owns that track.

“The CDI purchase of Colonial Downs and Peninsula Pacific Entertainment has not closed yet,” she said. If only this year were next year.

Someone else with knowledge of such matters added that the Kentucky Horse Racing Commission would not have looked kindly on such a move after it went to the trouble of negotiating a lucrative, summer Saturday away from Ellis Park in order to accommodate this weekend’s cameo at Churchill.

There is another element to this drama that has not gotten nearly enough play. That is bad luck. There never was any guarantee that the $10 million project to replant grass in the shadow of the twin spires was going to succeed. Even almighty Churchill Downs has only so much agrostologic influence with God.

As easy a target as CDI is, it is not immune to the same trouble that the NFL has in making grass grow. Roger Goodell should be so lucky as to have the power to preserve hybrid Bermuda beneath the feet of 300-pound linemen. Imagine how much tougher it is to have Kentucky bluegrass thriving under the hooves of 1,000-pound beasts.

It may be as simple as something I heard from a turf guru 15 years ago at what is now Chase Field, the ballpark in Phoenix where the Arizona Diamondbacks tried to make grass grow beneath a retractable roof.

“You have to remember that grass is a living thing,” he said. “It’s like us. We can be healthy, and we get sick. Sometimes our grass gets sick.”

So to Churchill’s turf, here is a toast to your good health. The better you survive rather than go the way of the grass at Chase Field, where they play now on some plastic thing called B1K.

As for holding the Arlington Million nearly 300 miles south-southeast of its spiritual home, it is hard to argue with the cold, economic reality of that most corporate of decisions. What follow are numbers Churchill’s critics do not want to see.

When CDI announced it had bought Arlington Park in 2000, one share of its stock cost $7.90.

The day it announced it would not apply to put slot machines at Arlington, it had risen to $123.80.

In the 22 years since Churchill bought and sold the joint, the stock value of what is abbreviated at NASDAQ as “CHDN” grew nearly 30-fold.

Even in today’s soft market, which may or may not be defined as a recession, the value of Churchill shares has risen 70 percent from the day almost exactly three years ago when CEO Bill Carstanjen told shareholders of the plan to close and sell Arlington.

All these numbers add fuel to angry declarations of greed. Critics, start your pitchforks and torches.

Churchill’s historic ticker also reminded me of the wise advice I got in when I was angry about something while working at ESPN.

“Do you want to get even with management?” this veteran colleague asked me.

With a pause, my sage friend told me two words.

That advice sounds good today, especially at a buy-low time. It may not make the grass grow in time for Saturday’s Not So Arlington Million. But between that and a live Pick 5 ticket, that is as good as I have got.