Flatter: It’s the 46th annual campaign to stamp out August 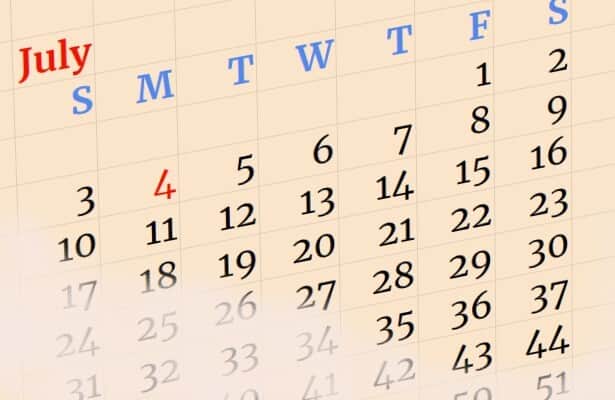 Is it too hot where you are? Sick of back-to-school sales already? Wondering why we have to wait two months between national holidays?

Cheer up, bunkie. I feel your pain. I have since 1977. That is why, for the 46th year in a row, I am declaring open my annual campaign to stamp out August.

Honestly, what good reason is there for this month to have been wedged into an otherwise perfectly good Gregorian calendar? It was named for Augustus, who was as a brother to Julius Caesar what Cooper is to Peyton and Eli Manning.

I will spare the details of how a bad, teenage breakup at this point on the calendar led me to my gruff attitude toward 31 of the doggiest days of the year. That was, however, the flashpoint for this chronological gloom.

This is not to say everything in August must go. Anyone with a birthday in the next four weeks simply needs to adjust the calendar. For instance, it is not Friday, Aug. 5. It is July 36.

Racing (finally, right?) has had as good a reason as any to extend July indefinitely. The better to maintain the momentum of the big fields at Del Mar, where the average race through the 31st had 9.7 horses.

Three-thousand miles away at justly celebrated Saratoga, the story is a lot different. There were not even 9.7 horses combined last weekend in the Vanderbilt (G1) and Jim Dandy (G2). The first three Grade 1 flat races of the meet attracted six, five and six horses. Saturday’s Whitney (G1) took in six entries and may be scratched down to five.

Maybe Augu ... – er, July 32 through July 62 – will offer some balance. How long can Del Mar continue to have big fields that are the envy of everyone from Saratoga to Santa Anita?

Now in their 12th year, Del Mar’s “ship and win” incentives unquestionably have had a positive impact on field sizes. Maybe that is something the New York Racing Association should consider doing to stoke its fields, lest it become complacent with its success.

Saratoga purses were jacked up another $1.6 million this year, mostly in stakes worth a total of $22.6 million. That should have been incentive enough, right? Why complicate it with some formulaic carrot on a stick? The problem there is that the new money seems to feed the same old beasts. Names like Klaravich and Brant and Winchell and Repole may as well be in sepia tones at the top of the owner standings. The rich who are getting richer really are not any different in New York.

At first it does not appear that much different at Del Mar. Hronis and Reddam and Barber and SF Racing look familiar at the top of the money tree. But Kretz and Díaz-Valdés and Fox Hill are not exactly household names. I know, I know. The first two are based in SoCal, and the last one is based on one long-shot victory in one race. Even so, maybe “ship and win” is just part of the message that the gates on Via De La Valle are more welcoming to much-needed new blood. And new dollars.

It is important to remember, however, there were 33 days between seasons at Santa Anita and Del Mar. It was not as if all those horses were going to flock to Los Alamitos in between. For the most part they walked their shed rows and galloped when they could. When races that fit their class resumed July 22, it was no wonder there were plenty of eager horses and anxious trainers ready to fill the cards at Del Mar.

Will that still be the case in two or three weeks? That is when the racing office at the junction of turf and surf has to go through the equine batting order for the second time. So we shall see.

Inevitably, all this brainstorming about field sizes and their fragile nature leads to the question about whether there are too many races for the ever-shrinking foal crop. Why schedule fuller calendars of a diluted product when fewer racing days would swing the supply-and-demand quotient to the favor of horseplayers?

The problem there is two-fold. First, eliminating hundreds of maiden and claiming and allowance and condition races would wipe out a vital proving ground for listed and black-type and graded stakes. Where are horses supposed to show themselves worthy of the upper level if there is no lower level? It would be like torching the minor leagues in baseball or the college programs that feed the NFL and NBA.

Second, there is the not-so-small matter of the community that depends on horse racing to make a living. Consider all the people who make racetracks go on a daily basis. Not three days a week. All seven. Races or not, horses do not eat and drink and sleep and exercise just part-time. If days’ worth of handle go away, so does the fuel to pay for everyone and everything needed behind the racetrack scenes.

When Santa Anita closed for 3 1/2 weeks because of horse deaths in 2019 and for seven weeks because of COVID in 2020, racing supporters reminded any Demopublicans, Republocrats and bureaucrats caring to listen that the livelihoods of 750 people were on the line. As certain California leaders made noise about permanently shutting down the sport, friends of racing rolled out that and other pertinent figures to recharge that political third rail known as jobs. So all’s quiet on the western front. For now.

While the east tries to cure what ailed its starting-gate population in July, and while the west tries to milk another six weeks of full fields out of its stables, this month by any name is a lamentable time in the Upper Midwest. It is where the Arlington Million will not be run.

After not being ready for prime-time racing for most of June, the grass is not much greener this summer at Churchill Downs. Apparently it is good enough to limp the Arlington Million and Beverly D. and only those two races on a detour through there next Saturday rather than cancel them altogether for the second time in three years.

For all the tears shed over the closing last September of Arlington Park, it is easy to forget that in 1988, the eighth running of the Million was held at Woodbine while the new grandstand was being built near Chicago. It was not run at all in 1998 and 1999, the first time Arlington supposedly met its demise.

Churchill Downs – the Inc., not the racetrack – put itself in a no-win situation by trying to keep the flame lit on the very Arlington Million legacy that it expelled from the most beautiful racing plant in the country. Moving the Million more than 300 miles south of its proper home – and from 1 1/4 miles to 1 1/8 – will be like seeing Michael Gambon replace Richard Harris as Dumbledore.

Yet there remains hope, if only a faint flicker that is a longer shot than Rich Strike was in the Derby. The Chicago Bears’ announced intent to buy the Arlington land and build a new stadium has not turned into a final deal yet. If all the I’s are dotted and T’s are crossed, the sale is not due to close until early 2023.

As I always have contended whenever and wherever a racetrack closes, as long as the wrecking ball has not made contact, then yes, I saying there is a chance. Political fighting closed Arlington before, for 2 1/2 years. Then it was reopened in 2000 and sold to its savior, ahem, Churchill Downs.

Of course the odds are long. They have to be, right? They still have to be better than my hope that the world arbiter of calendars, whomever that may be, realizes the genius of my goal to stamp out August.

Then again, in about four weeks, this endless month really will be gone. For the 46th year in a row, I can call my campaign a success. If only for 11 months.