Flatter: It is a week for Flightline, futures, figures and fowl 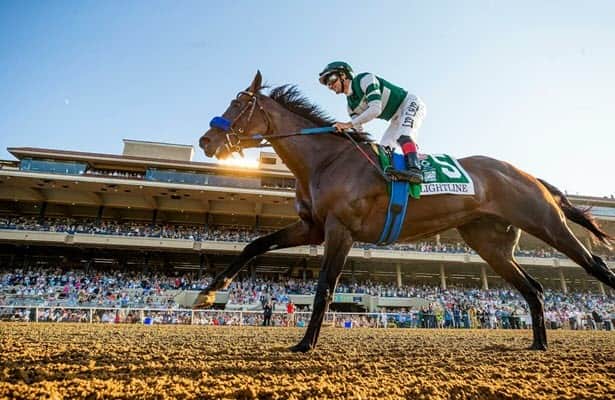 Things I ponder while staring at the abbreviation BAQ and wondering if Belmont at Aqueduct should be sounded out like a screaming chicken.

No. 1 what? Flightline was declared the best racehorse in the world Thursday by the Europe-based International Federation of Horseracing Authorities. (Ever notice how authorities both here and abroad stridently make “horse racing” one word?) What does that really mean? It really is an honorific that is less about the best racehorse but more about the horse’s best race. In the spring of 2016 a colt from Japan named A Shin Hikari was dubiously ranked the best on the planet on the basis of a virtually underwater race in France on a day that was as gray as he was. Three weeks later he finished last on a soft but not bottomless course at Royal Ascot. A Shin Hikari raced twice more that year, did not finish better than 10th and was retired. Eventually, sanity was restored when Arrogate overtook him and was the declared the year’s best by an international group of track handicappers. They would be morning-line makers if everyone had a morning line. The IFHA voters assign a weight in pounds to each horse for an imaginary race at an imaginary distance on an imaginary course made of an imaginary material. In theory, Flightline at 139 would carry four more pounds than former No. 1 Baaeed. In the end next winter, this settles nothing. It does give us Americans a direction to point and say, “So there.” And the English a place to snort their derision while continuing to mispronounce the name of our 44th President.

We’ll always have Paris. How could that be? Baaeed, as we heard from his camp this week, is not going there in two weeks for the Prix de l’Arc de Triomphe (G1). He did last year, though, when he won the Prix du Moulin (G1), chapter 5 in his 10-part undefeated story. The epilog is scheduled for this time next month in the Champion Stakes (G1) at Ascot. “I, in particular, was keen to keep him to a mile-and-a-quarter,” his trainer William Haggas said. “Therefore the Champion Stakes was the only logical solution.” Before anyone over here chirps about ducking the best competition in Europe, let’s remember Flightline does not exactly have a multi-page curriculum vitae himself.

Working on it. With only five starts, Flightline might be the least experienced favorite in Breeders’ Cup Classic history – and with six starts perhaps its least tested winner. Yes, that cart did precede that horse. All this begged the question about whether he would have the leanest list of past performances of any horse to start a Breeders’ Cup race for 3-year-olds and up. Spokesperson Jim Gluckson, who has been there since Liz Taylor showed up in 1984, remembered “Gilded Time ran in the 1993 Sprint off just four starts.” All wins, it turned out, until he finished third that year at Santa Anita. Someone will get back to you for a firm answer on the overarching question.

Predicting the futures. There is nothing like having chums in Las Vegas, and they told me do not expect futures books to open for the Breeders’ Cup Classic until as late as the week of the race. Paul Zilm said Circa Sports did not expect to do so until the draw. That would be Monday, Oct. 31, if the usual routine is repeated. Jay Kornegay from the Westgate Superbook said nothing will go up “in the near future,” but there will be fixed-odds bets taken there at some point. Chuck Esposito said Station Casinos only will handle pari-mutuels. Chums from Caesars at William Hill had not reported back, but if there is a likely candidate for early, Classic futures, that would be the place. I wonder if any of those joints simply will book a yes-no prop on Flightline. Yes probably would open around minus 150, meaning the no would be about plus 130. This market may have marks on it from all the 10-foot poles trying to avoid it.

Beware of favorites. What do Hollywood Star, Tight Ten, Therideofalifetime and Stellar Tap have in common? They all were heavy favorites, none longer than 11-10, who failed to win four of the last five runnings of the Iroquois (G3). Dennis’ Moment, at 2-5, was the exception, and he did next to nothing after that victory. Whether it is Echo Again or Damon’s Mound on Saturday, let the bettor beware.

Are we there yet? Bell’s the One vs. Sconsin VII is this weekend at Churchill. These two have turned into Ozzy Osbourne and KISS.

The forgotten 3-year-old. The list of this year’s best Beyer Speed Figures for the foal crop of 2019, according to Daily Racing Form, has names we have gotten to know well. Epicenter, Charge It, Expressman, Jack Christopher, Cyberkn ... wait a second. Back up one second. Expressman? The $325,000 Liam’s Map colt is a late bloomer for owner Vinnie Viola and trainer Todd Pletcher who uncorked a 107 in his debut last month at Saratoga. David “Paddock Prince” Levitch, one of our Horse Racing Nation handicappers, pointed out on my podcast that he races Saturday in a seven-furlong allowance that is booked as the ninth race at Aqueduct. Expressman was made the 2-5 favorite on the morning line. One would hope this guy is someone we can look forward to seeing in 2023.

The grass is greener. Churchill Downs Inc. is buying 100-year-old Ellis Park for $79 million. If nothing else, that offers a plan B for next year’s Arlington Million.

In all seriousness. The BAQ abbreviation has been like a piñata for snark artists like me this week, but it does have a useful purpose. Say someone is looking at the history of the Woodward (G1) in the distant future, perhaps in far off November. The BAQ will serve as a good warning that the race’s patterns will be exceptional this one year, even if it will be the third in a row that either the distance or the venue will have changed. The new abbreviation is a reminder of when when we had OTH to differentiate Oak Tree at Hollywood Park from OSA for Oak Tree at Santa Anita. That was so we would not be confused with HOL for Hollywood Park before it was BHP for Betfair Hollywood Park. Come to think of it, how is it FanDuel Sportsbook and Horse Racing at what is still found online at FairmountPark.com is FAN, but Horseshoe Indianapolis is IND and not HI? It makes me wonder Hoosier Park, Florida Downs, Turf Paradise. In shorter words, HOO FD TUP?

» Horse: Bell's the One
» Horse: Expressman