Flatter: Hank ‘The Hammer’ Goldberg was all about friends 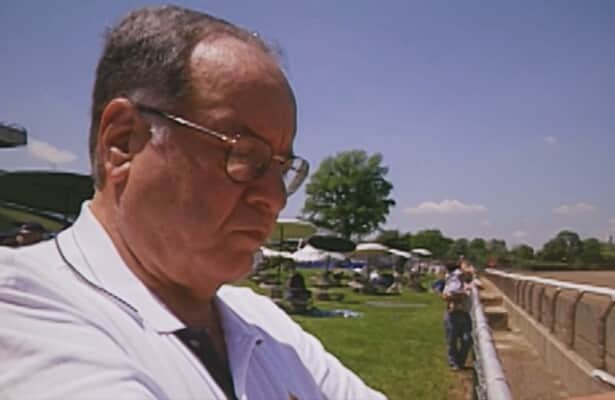 It was about 2 1/2 years ago when I last saw Hank Goldberg.

I was living in Las Vegas, and I was inside the Green Valley Ranch casino to meet Shecky Greene. Yes, that Shecky Greene. He had just been on my podcast, and we were going to hang out to bet the horses.

Standing outside one of the cafés on that Saturday afternoon, I was on the phone with Hank. He said he had just gotten done talking with one trainer after another, and he was busy doing this and that, and he had just done a video hit with ESPN or CBS or whomever.

I said, “Hammer, we should get together sometime.”

And that was that.

About two minutes later I walked into the sportsbook and saw Shecky sitting in the second row of betting consoles, watching a telecast of the races at Belmont Park. And who should be there with him but one Hank Goldberg.

“Why didn’t you tell me you were here?”

Suddenly we were back in time. Here I was, the kid at 60, sitting with Hank, then 79, and Shecky, 93. On a college football Saturday, I had every intention of spending maybe an hour in the casino before going home. About five hours later, I was explaining to my wife why I spent the whole day at a casino making bets that I could have made digitally from our apartment.

It turned out I was not there enough. Too many tomorrows turned into yesterdays that got away. Hank Goldberg died Monday on his 82nd birthday.

“On his birthday,” said a text from ESPN’s Tony Kornheiser, a contemporary of Goldberg and one of his many longtime friends. “Maybe he felt it was time? Thomas Jefferson went out on his birthday, too. Such symmetry.”

Well, close. Tony might have been thinking about the fact that Jefferson and John Adams both died July 4, 1826. But Independence Day point taken.

Hank was famous like Davis and Steinbrenner. And he knew them. He did not know Jefferson and Adams. If he had, he would have said so.

?? @JeremySchaap remembers the life and career of Hank Goldberg.

“Being in the world that we’re in, we have met different people of some celebrity,” said Kenny Mayne, another former ESPN colleague – and friend – of Hank. “You’ll mention them, and your friends will give you a hard time. Like, ‘I’ve got to pick up all the names you’re dropping here.’ Hank, though, that was just his life. He would say, ‘I was having lunch with Joe Namath the other day.’ Whoever it was, that was real. That was genuine.”

Right to the very end. That was especially true in horse racing. He stayed in close contact with trainers such as Bob Baffert, Dale Romans, D. Wayne Lukas, Kenny McPeek and especially Chad Brown.

“Chad Brown and I have become very close,” Hank told me in 2018, when I sat with him at Silks Simulcast Center at Gulfstream Park. “Best friendship I ever made. We got together at a restaurant one night, and we had a great conversation. He liked me, because he knew I was friendly with (the late trainer) Bobby Frankel, and there was a connection there. He always takes my call.”

So were a great many others whose own names were honored merely by their being dropped by the man who loved racing and was loved as an avuncular TV tout and as a radio icon for 35 years in Miami. Among some of Hank’s most cherished friendships were those from the core group with whom he worked at CBS Sports in the 1970s and ’80s on “The NFL Today.”

“I had moved from New York down to South Florida,” said Bob Fishman, who spent many of his 50 years at CBS Sports directing “The NFL Today.” The show with Brent Musburger, Phyllis George and Irv Cross also featured Jimmy “The Greek” Snyder. Snyder’s right-hand information man was one Hank Goldberg.

“Hank and I, we were actually introduced by our friend, (producer) Mike Pearl, who passed away almost two years ago,” Fishman said. “We spent some days at the racetrack getting ready for the show. Hank was one of a kind.”

Fishman recalled the story of how the three of them left a winning race ticket in Snyder’s open coffin at his 1996 funeral in Ohio. It was a story I remember Hank telling when we worked together that year at WQAM radio in Miami. There was a glint in his voice when he told it, just as there was when Fishman reminded Mayne and me in our conversation Monday with two of Hank’s TV producers – Steve Nagler and Kris Kugler.

That winning ticket that was buried with “The Greek” was not the only one Fishman shared with his dear friend.

“Hank and I split a Pick 6 ticket about 10 years ago,” Fishman said. “It was the weekend of the Doral (golf) tournament on CBS. I promised Jim Nantz I’d sit up in the 18th tower with him. I left the track early. Hank was calling me, and I was muffling the phone, because I didn’t want anybody to hear this on the broadcast. Hank calls me and tells me we hit the Pick 6. But now I can’t celebrate or scream or do anything, because Nantz is on the air. I’m whispering, ‘How much did it pay?’ He said, ‘$29,000.’ I’m like, ‘Oh, my God, I can’t celebrate.’ We had so many great times like that.”

Hank was superstitious, a trait that I appreciated and apparently did not poke in the four years I worked with him. Like waiting for a clock to hit 0:00 or the third out to be put away in the ninth inning, he and I never counted our tickets before they cashed.

Remembering a time when he and Daily Racing Form’s Jay Privman were on an assignment for ESPN, Mayne said, “Hank was betting some obscure track, and he’s got a bunch of money on a horse that was winning by like 10. I looked at him and said, ‘Hank, you’ve got it.’ He and Jay just stopped looking at the screen. They stare at me as the horse is going slower and slower and loses by a head. Of course it was my fault.”

“He was superstitious about that,” Kugler said. “He would give me the death stare. I would just zip it until the race was over.”

That reminded Kugler, who is based in Bristol, Conn., of another adventure with Hank – and his big score betting against Smarty Jones’s bid to win the 2004 Belmont Stakes and, with it, the Triple Crown.

“I was all in on Smarty Jones that year, and he was not,” she said. “That was the race where afterward, he needed security because he had so much on Birdstone. We had to provide security to escort him to his ride out in the parking lot so that he wouldn’t lose his winnings before he got back to the hotel.”

“I remember seeing him back at the hotel there in Garden City (N.Y.),” Mayne said. “It looked like he could barely button his coat. He had so many $100 bills.”

The story goes that the Goldberg connection to racing began when Hank bought his first car coming off a big daily-double score at Monmouth Park. That was in 1957, back when the legal age to gamble was 21. Hank was just a teenager.

Horses always took a certain priority with Hank, even when he was making more of a name for himself as ESPN’s expert on, ahem, NFL gambling – nudge, nudge, wink, wink.

“Hank loved Del Mar,” said Nagler, a San Diego-based TV man who could say the same thing about himself. “He was a Del Mar guy as opposed to a Saratoga guy during the summer. We were there for a Monday night football game, but it was in August. We were in the Del Mar press box. It was about 4:15, and Hank was still there. Everybody knew he was going to the game that night. Somebody said, ‘Hey, isn’t the game starting at 5:30?’ Hank said, ‘No. It’s a preseason game. I need to stay for the late double.’ ”

As I learned firsthand, Hank was set in his ways. Confident in his opinions, he was difficult to sway. Disagreeing callers to his radio show at WQAM were prone to being hung up on, complete with a sound effect of a steely knife being honed before it was applied to a screaming man. He called it “The Bobbitt,” named for the infamous victim of a wife’s attack on her husband’s man zone.

“He was a joy to be around,” Mayne said. “But he could also be a little grumpy now and then. That was Hank, too. He was a little of everything.”

Hank would keep score and drop the names of enemies, too, but he did not hold a grudge with his friends. I know. We had some big beef in 1996, when I quit WQAM in a huff after we butted heads over a lack of guests the day after the Florida Panthers were swept by the Colorado Avalanche in the Stanley Cup Final.

A week later, my phone rang.

It was Hank, calling to be the bigger man and to bury whatever hatchet we might have been brandishing. We had dinner a couple nights later, and I was off to Texas. And he held forth on WQAM for another 11 years.

A failing kidney led him to move to Las Vegas, where his sister, Liz, leant the most helping of hands in his final years.

All the while, Hank never forgot his old friends and colleagues.

“The calls that I remember the most started in 2014, when he blew up my phone on a Sunday in May,” Kugler said. “He was calling, because it was Mother’s Day, and my mother had passed in March of that year. He wanted to let me know he was thinking of me. He continued to call every Mother’s Day after that when he was healthy.”

Hank kept making calls. He was working right up to the end. I remember him glowing in voice when he told me how ESPN was providing him COVID-safe access to its Las Vegas studio to make picks on the “Daily Wager” sports-betting show. He still did work for some websites right through last month’s Belmont Stakes.

All the while, he still was maintaining his contacts in and out of racing. In an era when leaving text messages and hoping for a response pose as legwork, Hank was a throwback to a time when putting boots on the ground was de rigueur. Nowadays using the phone as, well, a phone is like going the extra mile.

Not for Hank. No wonder he was pertinent right to the very end.

“Friendships in this game mean a lot,” he said in that 2018 chat at Silks. “If they know you’re working hard, they’ll help you out. If they know you’re just a guy who shows up once in a while, or if you’re trying to use them to make a name for yourself, they’ll ignore you.”

In the end, more than one thing could be true of Hank Goldberg. He worked hard. And because of that, he made a name for himself. A good one.

Just ask all the names he knew.