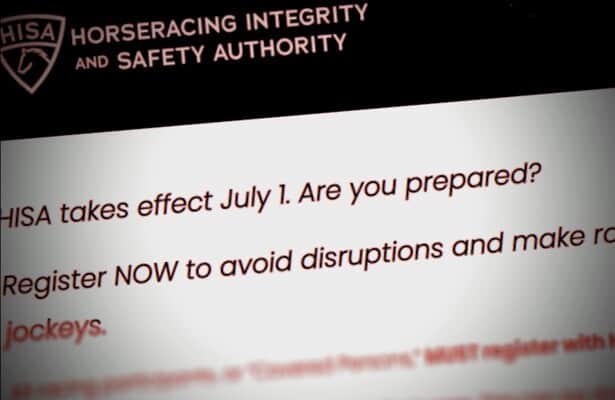 Racing reaches an obvious crossroads next Friday. For better and/or worse, the federal government comes riding into town on its high horse with a saddle bag full of regulations and a cavalry of law-and-order deputies. They will be greeted by a posse of finger-wagging critics.

This ain’t exactly Buster Scruggs here. The Coen brothers are not walking through those swinging doors.

July 1 this year has a vibe that is full of the high and mighty. Lisa Lazarus, who signed up for the role of well-compensated condottiero when she agreed to become CEO of the Horseracing Integrity and Safety Authority, warned Kentucky horsemen this week, “The federal government could also close down horse racing.”

Did I hear the theme to “The Good, the Bad and the Ugly” bring the saloon to a standstill?

As she tried to position herself as someone who could work with horsemen and not against them, Lazarus may wish she had rephrased that warning. Or that, in the course of a three-hour meeting, those 2.4 seconds had not been singled out. Or both.

It does not matter. Lazarus uttered that declaration like those police officers who tell school assemblies that they are your friend while packing a .38 that is impossible to ignore. Speak softly, but carry a big threat.

So what happens when the HISA gang, emboldened by a departed Congress, a high-profile former President and the bureaucratic authority of the Federal Trade Commission, casts its bi-partisan shadow over the racing landscape at sun-up next week?

We know for sure that some of the changes will be works in progress. A complete Lasix ban hinges on a three-year grace period. (Hasn’t Lasix been on one long grace period since 1974?) A database has been ordered for horse breakdowns, so tracks like Churchill Downs may no longer hide those numbers. But that may not be up and running until this time next year. And crop rules for jockeys look like an eternal work in progress.

While owners and trainers say it is too much, too fast, too wrong, they seem to be overmatched by a greater racing establishment of track aristocrats and blue-blood fraternities who signed onto HISA faster than you could say political expedience. More important, a public that is worn out from the sport’s attendant melodrama has embraced the ideology of federal oversight.

Social media, which may as well be Rango in our little Western, actually provides a rare burst of reasoned common sense. Its long view of racing’s new dawn is that it is overdue. That it is high time we rounded up the cheating outlaws and ran them out of Frenchman’s Gulch.

Yet using HISA’s own guidelines that have been written and rewritten in the past 18 months, too often in a veil of secrecy, we cannot even agree on what an outlaw is. Oh, sure, the public will pile on Bob Baffert or whomever is next to get hauled into the town square. Based on what the long arm of California racing law did this week, I guess Richard Baltas, accused of illegally drugging 23 racehorses this spring, is on deck.

But how many picograms of a skin ointment will it take – “officially” take – to separate the bad guys from the good? How many whacks of a rubber dowel must turn a jockey into a pariah? And presuming the hurling of rotted produce is no longer deemed sufficient, what punishments will there really be for these high crimes and misdemeanors? Who, for that matter, will dress up in the figurative powdered wig to mete out this brand of justice?

Details, right? That is where the devil lies.

It also lies in sanctimony, of which there is no shortage in racing or in any sport. Finding consistency is a whole nuther devil.

Think about all the noise that preceded last week’s U.S. Open Golf Championship. Phil Mickelson and his ilk were crucified for taking blood money from the new Saudi tour that has since stopped this week in Oregon. A lot of that caterwauling has come from the TV networks who are in bed with the PGA Tour, the mortal enemy of the Middle East’s new venture.

Contrast that now with the polar opposite position taken by horse racing, which has embraced the $20 million Saudi Cup in the three years it has been on offer. Funny how TV racing commentators who are paid by a certain royal government have a very different sounding tune from their golf brethren who are not.

Trying to get a focus on conventional wisdom through that sort of media lens is like trying to get an even-handed view of the world by watching MSNBC or Fox News – but not both. In truth there is a premium on both convention and wisdom. If illusions of truth can be bought with media contracts, imagine how we may be wooed by the powerful interests on either side of the HISA chasm.

Townsfolk who really are not interested in the spectacle of a duel at high noon hopefully will ignore all this noise and, instead, ride forward with their desire for some new assurance that the game is fair – even if it turns out to be nothing more than a precept of fair.

For those like me who do not see HISA as the right way to go about cleaning up the sport, there is the argument that the racing hierarchy supporting it had every chance to fix this mess on its own. And it failed. So why not give this a try?

Reluctantly, I have to agree, especially because no one has come up with a better way of going about the business of fixing what is wrong with the game.

What was the old Reagan line? “Government is not the solution to our problem. Government is the problem.” That does not work in racing, because this is about governance, not government. Whether it is racetracks, racing states, racing organizations, racing fiefdoms or even the racing public, there has been a stubborn refusal to govern one’s self.

The public is partly to blame. That would be you and I. We still bet plenty on races. Coming out of COVID last year, total handle in the U.S. reached $12.2 billion, according to The Jockey Club. That was the highest it had been since 2009, when there were 47 percent more races. Yeah, throw more money at a sport that just gets worse. That’ll show ’em.

Of course, money alone does not spell trouble or make it go away. Just ask the NFL, which brought in $18 billion in revenue last year. Oh, there remains that pesky issue of head injuries. Nine years ago the league agreed to pay $1 billion to settle all the extant lawsuits that made CTE a household abbreviation. We barely hear about head injuries now, but that does not mean those life-altering incidents have vanished. They just caught shade from a big pile o’ money.

The same applies to the very catalyst for HISA – the 49 racehorse deaths in 2018-19 at Santa Anita. The HISA proposal preceded that crisis, but anyone thinking those 49 horses were not the reason for the bill becoming law needs to get out of the disingenuous wagon.

Santa Anita had only nine horse deaths in its just-completed season – and none in races. True, nine are still too many. But the improvement was laudable, even if the same Los Angeles TV stations that gleefully reported on every equine fatality three years ago failed to recognize the turnaround with the same gusto. (Sorry. A little-noticed follow-up on the Channel 4 website is not the same as seeing news anchors tell you ’bout the horse crash with a gleam in their eye.)

HISA provides no guarantee against another rash of tragedies. It cannot assure us that outlaws will be completely wiped out. It has not drawn a distinct line in the sand to stop the use of, say, clenbuterol. And it has not even been tasked with sorting out such nagging issues as post-time drag, batch betting and bloated takeout.

I, for one, will try to be patient with all this. The website glitches in the sign-up process were as inevitable as they were with Obamacare. I put those on the I.T. wonks, not on any argument for or against health insurance or racing regulations.

For those who are adamantly in favor of or opposed to HISA, I have nothing for you. For the masses who believe something, anything, needed to be done to repair our sport, I hear you. And I am with you.

The HISA gang may be going about its business with all the grace and aplomb of airline customer service or, worse yet, the NCAA. But that is irrelevant. What Lazarus said – “The federal government could also close down horse racing” – should not be taken as a hollow threat. It could end up being the sport’s epitaph.

Of course, there is that old stand-by that we hear every four years whenever we rally around the possibility of change in the federal government. “If ‘so and so’ wins, I’ll move to Canada.”

Hey, HISA does not apply at Assiniboia Downs, right? I wonder how this Western would play in Winnipeg.