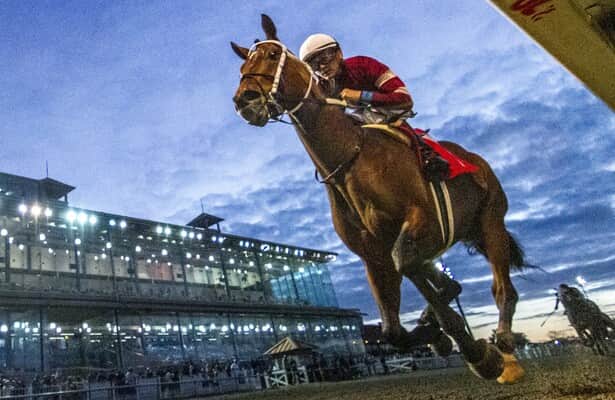 Go stand across from the eighth pole at a racetrack. Any racetrack. It does not even have to be at Churchill Downs.

Now look toward the finish line. It looks like it is a long way away.

That is the old method of showing how much farther a 3-year-old horse has to go if he wants to win the Kentucky Derby. Old, because Churchill Downs changed that dynamic a couple years ago.

No, the nearly $8 billion NASDAQ behemoth did not revalue the furlong or move the eighth pole to make room for more licensable personal seats. That may come with the paddock redevelopment in the next couple years.

Get free Oaks, Derby past performances via Brisnet.

Instead, this has to do with what Churchill Downs Inc. – the company – did in New Orleans two years ago, when the preps building to the Louisiana Derby (G2) were lengthened. The stated reason was to make the dash to the first turn in those races more fair to horses drawn to the outside.

An unintended consequence of that move was to give the races at Fair Grounds, which Churchill owns, a lot more influence on the Kentucky Derby.

The sample size remains ridiculously small, but don’t deny that the thought has crossed a mind or two. If Epicenter, Zozos or Pioneer of Medina were to win Saturday at Churchill Downs – the racetrack – it would confirm the Louisiana Derby as the most important prep on the road to the Kentucky Derby.

A big reason is that, by being extended to 1 3/16 miles, the Louisiana Derby gives horses the benefit of having gone 110 yards farther than most of the rest of their 3-year-old peers. Don’t underestimate that in the development of horses who will have lived nearly 4 percent of their young lives in between the two races.

The advantage of having gone that extra sixteenth of a mile was not lost on Hall of Fame trainer Steve Asmussen, whose best ever chance to get his first Kentucky Derby win after 23 losses may lie with his Louisiana Derby winner Epicenter.

“It’s something he’s had success at, and (his rivals) have not been given that opportunity,” Asmussen said.

Let’s go back to the racetrack. Walk those 110 yards down the stretch and stand across from the sixteenth pole. That gaze to the finish line does not look nearly as imposing. Neither does recent history for Louisiana Derby horses coming to Louisville.

When Country House was gifted the roses by stewards who took down Maximum Security in 2019, that meant the Louisiana Derby had produced the Kentucky Derby winner for the first time since 2003 and only the fourth time in its then 125-year history.

With the eventual disqualification of Medina Spirit, that meant four of the top five finishers 53 weeks ago at Churchill Downs came out of the Louisiana Derby. Mandaloun was promoted to first, Hot Rod Charlie second, O Besos fourth and the Midnight Bourbon fifth. Even without the DQ, it was still four of the top six.

Zip ahead to Saturday. If Epicenter, Zozos and/or Pioneer of Medina were to win or even take their places in the top third of the Kentucky Derby chart Saturday, the drumbeat until this time next year would be to the rhythm of how important the Louisiana Derby had become.

Is it really unrealistically kneejerk to think this will happen? Consider that it does not take long for a single happenstance to double in size to a growing trend in any sport.

When young Sean McVay achieved early success coaching the Los Angeles Rams, it seemed like every team in the NFL had to get themselves a coach from his tree. How long did that take? Ten minutes? Twenty?

After the Golden State Warriors got successful from Stephen Curry and Klay Thompson firing long-range missiles, how long was it before basketball at every level turned into a 3-point contest? Had the Dubs even hung a new banner yet?

And don’t get started about how baseball went all analytical faster than you could watch “Moneyball.” Brad Pitt probably got residuals every time a team put on a tilted defensive shift.

It begs the question whether other racetracks might want to keep Fair Grounds from luring all the best 3-year-olds down to the Bayou every March. How long might it be before we see the derbies at Santa Anita and Gulfstream and Oaklawn and the memorial at Aqueduct and the stakes at Keeneland and the steaks at Turfway swell to 1 3/16 miles?

Oh, yes. The UAE Derby already covers that distance. But in reality, it goes about 7,400 miles. Well, 7401 3/16 miles, not counting the connecting flight required to get from anywhere to Louisville. Go stand at the sixteenth pole and try staring toward Dubai.

So back to New Orleans. With apologies to Zozos and Pioneer of Medina, it is Epicenter who could change the look of the road to the Kentucky Derby. Not only would he give Asmussen everything he could want on his racing bio, but he actually might get some folks to thinking about the luster of running 9 1/2 furlongs in late March and early April – and not just on the Bayou.

And if none of the Louisiana Derby graduates comes close to hitting the board? Then think about how wonderful this column would look in the digital trash bin.