Flatter: Common sense eludes the Arc, but what about here? 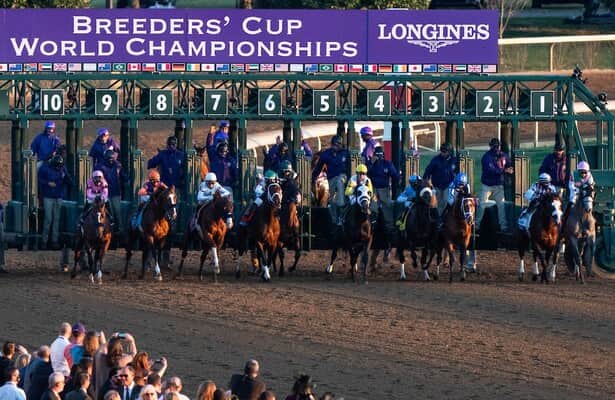 Something that happened in France this week was a cautionary tale of how humans do not always do right by horses.

Fortunately, this was not about safety or welfare. No animals were harmed in the making of this story. But a horse’s career was scarred, and the same thing could happen over here.

Verry Elleegant won last year’s Melbourne Cup (G1), Australia’s most famous race. It is not Australia’s best race; that honor belongs to the Cox Plate (G1). It is not even the richest anymore; that designation belongs to The Everest. But having lived there for three years in the ’00s, I can vouch for its importance. Melbourne Cup Day, with a capital “D,” is a public holiday. Seriously.

Her owners decided on a European campaign this year, so off Verry Elleegant went with the target being the Prix de l’Arc de Triomphe (G1). No horse ever has won the most famous race in the Southern Hemisphere as well as the richest, most prestigious one in Europe. It was a story worth telling. And worth experiencing.

But Verry Elleegant was not invited to Sunday’s party. An unnamed handicapper who rates the horses for racing authority France Galop decided the 7-year-old mare had not lived up to her previous form in her two starts this summer. That left her ranked below the 20-horse cutline.

In essence, she was penalized for daring to keep racing.

“It is an absolute travesty,” Brae Sokolski, one of Verry Elleegant’s legion of owners, told Racenet, one of Australia’s best websites for our sport. “Her two runs in France were used against her by the French handicapper to effectively eviscerate her rating. Then he also tried to justify it with her four-start Sydney campaign earlier this year when he said her win in ... a Group 1 race was a relatively low rating performance by her standards.”

Stay with me. This eventually gets back to America.

Lacking anything more than boilerplate statements from France Galop, this turned into a one-sided debate that turned Verry Elleegant and her owners into sympathetic figures. Instead of racing for their share of $4.8 million Sunday, they will compete for consolation money Saturday in the less prestigious Prix de Royallieu (G1), a race worth $288,631.

“We talk about the globalization of racing, but I think this decision takes us a step backwards in that regard,” Sokolski said. “It makes you question why we roll out the red carpet for their horses, and all they do in return is roll out the red tape.”

And there you go. Let the xenophobia begin.

Sokolski no doubt was shooting from the hip when he spoke to Racenet. Trainer Francis-Henri Graffard, the France native who has been looking after Verry Elleegant since her move to Europe, was only slightly more circumspect when he criticized France Galop.

“I’m very, very upset about the French authority and the French handicapper and my racing country in general,” he told the Nick Luck Daily Podcast.

Now the part where we bring it to America. This could happen in the Breeders’ Cup. It could be argued that it already has happened. Just ask Freddy Head.

The soon-to-be-retired trainer and an accomplished member of the first family of France racing brought Polydream over here four years ago to race in the Breeders’ Cup Mile at Churchill Downs. Instead, she was scratched by veterinarians who decided they did not like the cut of her jib.

“The vet decided she wasn’t trotting well,” Head told Racing UK after he got the news. “She always trots like that. She hasn’t got the best knees, so she’s always trotting a bit on the side.”

Head rubbed the doctor’s nose in the diagnosis by breezing Polydream more than a mile on the morning she was supposed to race in the 2018 Mile. She came out of the workout just fine, but Head did not. The man who rode Miesque to wins in 1987 and 1988 and then trained Goldikova to an unprecedented three-peat spanning 2008-10 never returned to Breeders’ Cup, which really ought to name the Mile in Head’s honor.

Not that this was a Breeders’ Cup issue as much as it was a Kentucky vet who probably thought he or she was doing the right thing. Instead, the doc just did not know the horse. It was like the vet who went all Al Haig last year at Del Mar and tried to throw Modern Games, another European horse, out of the Juvenile Mile. Then after bets were refunded, Modern Games won the race. The cacophonous booing that afternoon was appropriate.

It is not just veterinarians. The Breeders’ Cup qualifies a lot of horses through its Challenge Series, the races known by the hackneyed “win and you’re in” moniker. There are so many of them that it feels like a championship race could be oversubscribed just with “winners and you’re inners.” In truth, that cannot happen. Sometimes it just seems that way.

The danger really comes in when humans left of their subjective devices have to fill races and decide who must be left out. In 2018 a panel of racing directors and secretaries decided Roaring Lion deserved a place in the Classic based on the merits of his four-race winning streak in European Group 1s. That he never had raced on dirt was of no more concern than to think that Lewis Hamilton, who has proven himself fast driving Formula One cars, should be able to drop into the Daytona 500.

Because of the decision to give Roaring Lion a shot at some of the $6 million purse, Woodward (G1) runner-up Gunnevera needed City of Light’s connections to choose the Dirt Mile in order to start in the Classic. Gunnevera finished second to Accelerate. Roaring Lion came in last.

Now hit the clockwise-30 prompt a few times to move five weeks ahead to Keeneland. Even though he delivered at 80-1 in the Kentucky Derby, and even if he finished first in the Lukas Classic (G2) on Saturday, Rich Strike still would not have won his way into the Breeders’ Cup Classic.

Yes, he should have enough North American graded-stakes points to get in. Failing that, the racing directors and secretaries surely would vote him a place in the race, right?

There probably are better, more borderline examples than Rich Strike. Like the 69th team trying to get into the 68-team NCAA Tournament, someone will feel snubbed when the Breeders’ Cup pre-entries come out Oct. 26.

Still, this discussion, contrived as it may be, begs the question why the Kentucky Derby is not a “win and you’re in” for the Breeders’ Cup Classic. For that matter, why isn’t the Melbourne Cup a “si vous gagnez, vous qualifies” for the Arc?

Maybe this is just my fear of legalese talking. When I lived in Australia, it became clear that the leading non-government export from there was something called common sense, a commodity that unfortunately did not land in France this week.

Hopefully, it bubbles up here in America this fall. Some horse’s career may depend on it.