Flatter: Baffert hearing has a ways to go to get to big stage 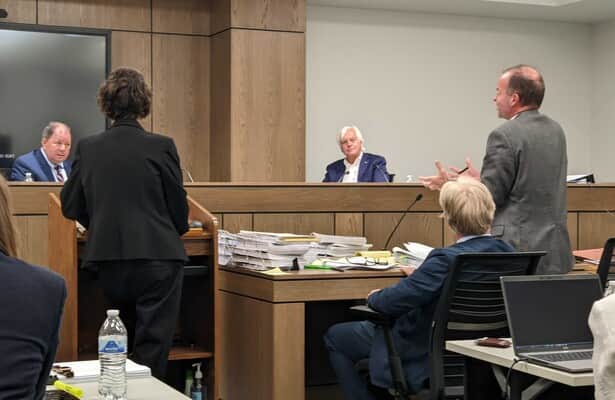 There is a woman named Shell who dutifully yet pleasantly greets everyone who passes her reception desk inside the Mayo-Underwood Building.

A few hundred yards away there is a place called Sig Luscher Brewery. It has a nice patio and cold beer and tricked-out hot dogs, and it does not get too crowded during happy hour.

Those daily bookends have been the highlights of a week spent covering the less-steak, more-sizzle theater production a.k.a. the Bob Baffert appeal hearing.

Right behind Shell’s desk, through the door she unlocks with a push of a button, there is an nondescript inner lobby that leads to a short hallway and another door through which lawyers and their staffs and scientists and media and lawyers and Bob and Jill Baffert and some racing folks and lawyers have passed in order to occupy a sterile meeting room this week. It looks like some place a city council would get together while its regular chambers were being rebuilt.

But wait a second. Let’s not gloss over that steak vs. sizzle dig.

For 25 hours covering four days this week, everyone has gathered in that room for a hearing that has the look, sound, feel, taste and smell – especially smell – of a courtroom trial.

Most of those 25 hours have been utterly ... well ... let’s be polite for a moment and say predictable. The five attorneys who have done most of the talking – the two for the Kentucky Horse Racing Commission and the three for team Baffert – have been putting on a show.

It has not been their first go-round. This production got started when Medina Spirit failed his post-Kentucky Derby drug test nearly 16 months ago. It has been in previews since June 11 last year. That was when Jennifer Wolsing, the lead lawyer for the KHRC, and Craig Robertson, one of Baffert’s attorneys, took the stage in a courthouse about a half-mile up the street.

Like any live production in previews, it gets rewritten a little and tweaked here or there. New actors show up. But by the time the show hits the big stage on Broadway – or in the Kentucky Supreme Court – it looks pretty much the same as it did off Broadway.

The Mayo-Underwood Building may be a different theater on this tour, but it has been much the same sizzle vs. steak show at the Baffert hearing this week. Like we all know the words to the songs from Mamma Mia! or Jersey Boys, we know what Robertson and Craig Brewster and Joe DeAngelis are going to say on behalf of Baffert. We all know the lines Wolsing and Luke Morgan are going to emote for the KHRC.

If this were one of those old midnight showings of “The Rocky Horror Picture Show,” there would have been discarded slices of stale toast flung about that meeting room. Actually, as dry as the testimony has been, zwieback would have been more appropriate.

At one point the nerdy, science speak about esters and ions and corticosteroids and immunosuppression and chromatographs got so far over my head resting on the wall in the back row, I started singing the theme from “The Big Bang Theory” just as the hearing went into a break.

“I like that song,” said Barbara Borden, Kentucky’s chief racing steward who has had an orchestra seat for this whole thing.

“The whole universe was in a hot, dense state,” I sang, eventually getting to “unraveling the mystery that all started with a big bang.”

Borden politely nodded as one does when encountering a crazy person, one who decided this play needed to be a musical. Crazy be I.

At one point this week there was a 3 1/2-hour intermission. Yes, 3 1/2 hours. That was how long those of us in the media – plus a quiet lawyer who identified himself only as someone who might yet have a role in a future staging of this production – were left to stand in the hallway while the actors and producers worked out some details in private. At one point I went out and said hello to Shell.

Later I found out the long pause was made possible by Industrial Laboratories, the first facility that did the once-over on Medina Spirit’s blood and pee. The lab bosses out in Colorado did not want some of their scientific secrets getting out in public. The fine folks wearing white smocks in Wheat Ridge need not have worried. My colleagues and I in the collective media probably would have reacted to that testimony like a dog confused by an unfamiliar sound coming out of a speaker.

So where is all this going? Not just this column – but this whole production that we have heard over and over again? Why have we invested so much time and so many brain cells learning to say betamethasone much the same way as we figured out how to say Antetokounmpo?

At some point next week – maybe Monday or Tuesday or, God forbid, later – Ms. Wolsing and Mr. Brewster will make their closing statements much as they have for a judge down the street and for Borden and her fellow stewards on a Zoom call.

We all may join in and sing along with the familiar show tunes. “Regardless of the Method.” “Topical, Not Injectable.” And my favorite, “I’ll Be Brief, Your Honor,” a little ditty based on a delusional canard that was stolen from some courthouse production before my time.

This show has gone through more than a few producers. There was Borden. There was Thomas Wingate, the local judge who probably will get another chance to lay his hands on it. Now it is a soothingly courtly man by the name of Clay Patrick, a lawyer in these parts whose family has been in the horse business for some time.

After everyone has taken a final bow, Mr. Patrick – sometimes known this week as “your honor” in a bow to old habits that are hard for attorneys to break – will take everything he has heard and write a review. Rather than wait at some gin mill for the results, the cast will scatter for a few weeks or however long it takes for that review to get done.

Once it is in everyone’s hands, the 14 members of the Kentucky Horse Racing Commission will get together.

If they see Mr. Patrick maintaining the popular momentum of the past year by saying the KHRC was right about its no-tolerance, no-excuses position on a betamethasone positive, they will rubber stamp his opinion and hail him like he was Truffaut.

If they see that Mr. Patrick decided the Baffert legal trio was right about the vagueness and ambiguity of Kentucky’s medication regulations, they will reject what he wrote as being as out of touch as ol’ Rex Reed.

The show inevitably must go on. Baffert is not giving up. Brewster declared as much in the hallway Wednesday when some Tweep with a burner account and 61 followers wrote, “I heard the KHRC is tapping out and they’re cutting a deal.”

“We will keep going until we prevail,” Brewster said. “Which we will.”

In the spirit of Bugs and Daffy, on with the show, this is it.

But like an earworm, one thing keeps eating at me.

Well into the future, long after this thing supposedly is resolved and all the horses who outlived Medina Spirit sire babies who themselves sire and foal more babies, I keep picturing a little kid. Maybe he or she is in the Kentucky Derby Museum looking at the roll of champions.

“Oh, that. That is an asterisk. They put it there when Medina Spirit finished first, but he was disqualified.”

“Because he tested positive for a drug that actually was legal, but it lingered in his system past the time it was supposed to. And the trainer had some unpopular comments that showed up Churchill Downs. And he had some old drug citations. He got most of them taken off his record. But by then he made a lot of people mad.”

“So let me get this straight, gramps. That horse was disqualified because of a little too much of a legal drug – and because of something the trainer said? That sounds like that time you went 60 mph in a 55 zone, except that cop didn’t throw you in jail.”

“Well, it’s more complicated than that.”

Then the two of them drove over to the capital city to see the latest production of “Sizzle vs. Steak.”

“Kid, you’ll love this. The actor who plays the second lawyer is the son of this woman named Shell. And after it’s over, I’ll take you over to get a hot dog at this place called Sig something.”

This curtain cannot come down too soon.