Flatter: Baaeed is No. 1 in the world ... if only we could prove it 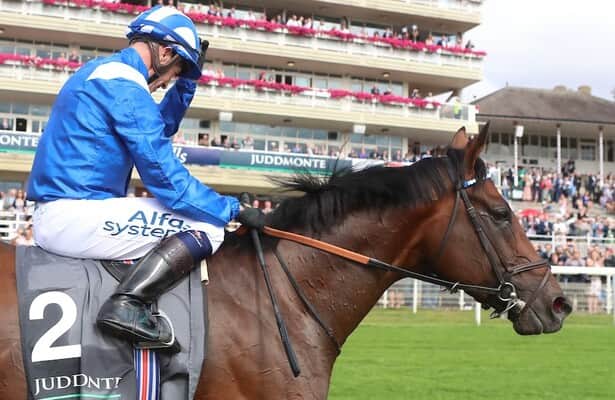 Getting the world as we know it to agree on anything is about as easy as unringing a bell. Politics. Religion. The definition of a caught football. They are just a few examples.

Baaeed, who ran his record to 10-0 on Wednesday by winning the Juddmonte International (G1) in England, comes about as close as one will find to universal acclaim. By most optics, he is the No. 1 racehorse on the planet.

Timeform, which carries the weight in Europe that Beyer Speed Figures do in the U.S., gave Baaeed a rating of 138 for his 6 1/2-length runaway. That was the highest in a turf race anywhere in 10 years.

Before the Juddmonte, the International Federation of Horseracing Authorities, which dubiously grades horses on their best performance of the year, had Baaeed at 127 pounds. That was one more than the 126 that Flightline got for his Met Mile (G1) win.

RELATED: Arc could be next for Baaeed.

The 4-year-old son of Sea the Stars colt bred and owned by the Shadwell estate has authored a flawless résumé the likes of which have not been seen since Frankel.

And therein lies the fly in the ointment.

The problem in grading the world’s best racehorse is that racehorses never take on the rest of the world. Never mind visiting any other part of the planet. Nowadays it is hard to get them to venture outside their barns in the afternoon. Take Flightline.

One thing Baaeed and Frankel have in common is their being based in England at Newmarket. From there they only begrudgingly gave up their home-meadow advantage to compile their unblemished résumés.

Frankel did not even need a passport. The farthest he ever traveled in his 14-0 career was the 170 miles to York 10 years ago for his own victory in the Juddmonte, a race sponsored by his owner.

At least Baaeed crossed a body of water wider than the Thames. He went to ParisLongchamp last September to win the Prix du Moulin (G1). Trainer William Haggas told Racing Post he might do it again and return for a blockbuster October date in the Prix de l’Arc de Triomphe (G1). Haggas also said some isle hopping next month to the Irish Champion (G1) remained a possibility.

One thing Haggas was adamant about was that Baaeed’s last racing act before going to stud in 2023 would be the British Champion Stakes (G1) on Oct. 15 at Ascot. That’s right. No Breeders’ Cup.

It was not any different for the magnificent Australian mare Winx. Between 2015 and 2019 she won her last 33 races, including 25 Group 1s, to become a world No. 1. But she ran 24 of those races at home in Sydney. There was the one time she made a 1,250-mile round trip for two races in Queensland. Four other times she clocked 900 miles going to Melbourne and back for a total of seven starts.

Coincidentally or otherwise, Baaeed and Frankel and Winx racked up 5,000 miles apiece in travel to and from their races. That is about the same as Flightline went on his one and only road trip to win the Met Mile (G1) and return home. It was like this quartet of stars was hell-bent to follow the trail Jim Boeheim blazed to schedule the never-leave-home Syracuse Orange for basketball assignments before any given New Year’s Eve.

Granted, a horse should not need to accumulate as many frequent-flyer miles as George Clooney did in “Up in the Air” to be branded a world champion. But whether they are based in England or Australia or California, they should be tested by the toughest competition in order to prove their worth.

When anyone (read: I) dared to raise the idea of Frankel or Winx hitting the road before being declared the world’s best, the reaction in England and Australia invariably was, “Why shouldn’t they come here to face us?”

That sounded like the third-grader who makes some boisterous declaration about being the smartest, strongest, coolest kid in the world before being challenged to prove it. The retort is always the same. “Prove that I’m not.”

The point is there are plenty of optics to consider aside from mere wins – and mere wins in Group 1 competition. Not all Group 1 races are alike. No one will convince me that Winx’s most frequent runners-up Happy Clapper and Hartnell were world-class measuring sticks. She had a chance to travel to Royal Ascot to face the likes of Enable and Tepin, but she was kept at home.

Ten years ago Frankel could have taken the Chunnel to the Arc or a flight to the Breeders’ Cup after his seven-length win in the 1 5/16-mile Juddmonte confirmed he was not just a one-trick miler. Why not try 1 1/2 miles somewhere else and offer proof to those who otherwise had been implored to come and get him? Instead, Frankel dominated the likes of Excelebration and Farrh like Nicolas Cage outclassed “Left Behind” and “Grand Isle.”

Will Baaeed’s connections follow that lead? If they decide not to pay the $122,000 supplement to go in the $5.08 million Arc, and if a trip to the Breeders’ Cup is out of the question, then the Irish and British champion stakes would be a de-facto yes. In that case, Mishriff and Real World might end up being to Baaeed what Sham was to Secretariat.

The problem with the less-is-more racing plan that ushers great horses to the breeding shed is that it dooms our sport’s future to look like the very past that the College Football Playoff managed to shed. Figs and ratings and sheets are like reverting to The Associated Press and USA Today polls to crown a champion.

If Baaeed does not race at ParisLongchamp – and Keeneland – he will forfeit the chance to put a deserved exclamation point on an otherwise sterling career. Sterling. As in nothing but pounds rather than a mix with Euros and dollars.

Apparently, that is just fine for horse owners who are content to stake disputed claims to being No. 1. That is because a subjective argument is never lost the way a horse race is. The better to preserve bragging rights that translate to higher stud fees.

If only we could prove it.