Flashback: These are the 5 fastest Penn Derby winners 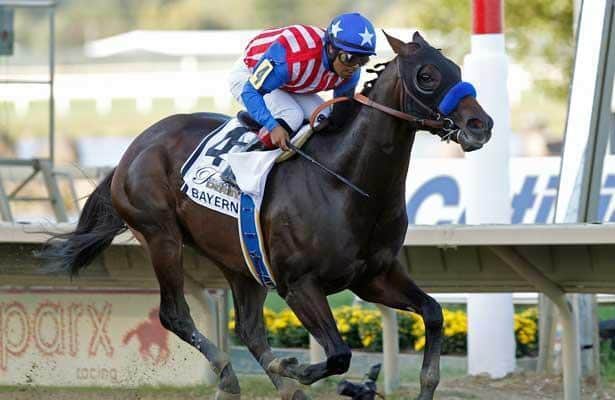 Inaugurated in 1979 with a purse of $100,000, the Pennsylvania Derby has come a long way over the last 40-plus years. It has gone from an ungraded stakes held in May to a Grade 1 event contested six weeks out from the Breeders’ Cup, and the purse has climbed all the way to $1 million.

Along the way, the Pennsylvania Derby has been won by many memorable horses, including a handful of champions. Let’s recall the five fastest winners of the 1 1/8-mile race:

Although not a household name today, Rock and Roll was a pretty good horse on his best day. A competitor in the 1998 Kentucky Derby (he finished 14th), Rock and Roll bounced back in late summer to win the Pennsylvania Derby. The Bill Mott trainee led all the way through solid splits of 23.28, 47.01 and 1:10.63 before kicking on to win by 1 1/4 lengths. The competition wasn’t the toughest – the Pennsylvania Derby was only a Grade 3 at the time – but Rock and Roll’s final time of 1:47.69 seconds was excellent.

The Pennsylvania Derby wasn’t conducted in 2006, but 2007 saw the race return to the scene with its first $1 million purse. Fittingly for this milestone occasion, Timber Reserve delivered a thrilling performance to beat a strong field of Triple Crown veterans. After casually tracking fractions of 23.04, 46.44, and 1:10.55 from second place, Timber Reserve rallied to the front and held off Preakness alumni Xchanger to win by a neck in 1:47.67 seconds. It’s safe to say Timber Reserve picked a lucrative day to secure his lone graded-stakes win.

Western Playboy didn’t have the best of luck in the 1989 Kentucky Derby, finishing last of 15 behind future Hall of Famers Sunday Silence and Easy Goer. But the Blue Grass (G1) winner ran out of his skin when contesting the Pennsylvania Derby in the fall. After racing near the back of the pack early on, Western Playboy rallied from eighth to first place in the span of a quarter mile. In front with three furlongs remaining, Western Playboy pulled away to dominate by 17 lengths, which remains the stakes record to this day.

Six-time graded stakes winner To Honor and Serve struggled during the spring and summer of his sophomore season but turned things around during the fall. The talented Bill Mott trainee was as impressive as could be in the Pennsylvania Derby, tracking splits of 23.29, 46.62 and 1:10.22 before seizing a five-length lead down the homestretch. At that point, the race was over, as To Honor and Serve cruised home to beat Belmont Stakes winner Ruler On Ice by 2 1/4 lengths in 1:47.34 – a stakes record at the time.

Only one horse has ever shaded 1:47 in the Pennsylvania Derby: Bayern. Six weeks before his upset victory in the Breeders’ Cup Classic, Bayern was a front-running force to reckon with in the Pennsylvania Derby, leading through increasingly stiff fractions of 24.07, 47.79 and 1:10.88 before surging away to score by 5 3/4 lengths in 1:46.96. Just as impressive was the quality of competition Bayern defeated – a bevy of graded stakes winners trailed him home, including 2014 Kentucky Derby/Preakness winner California Chrome.