Flashback: These are the 5 greatest Florida Derby winners 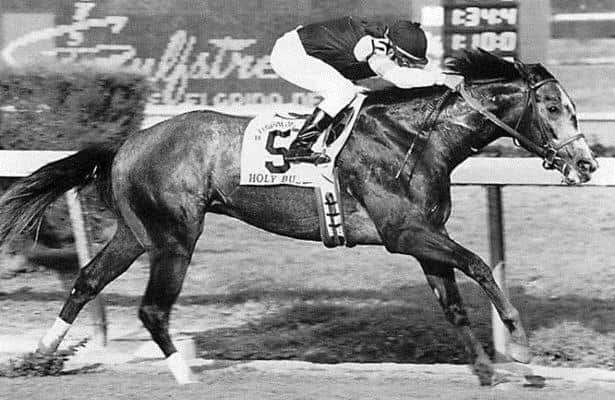 Few Kentucky Derby prep races have been more productive than the Grade 1 Florida Derby, which has churned out 24 Run for the Roses champions since its inaugural running in 1952.

As a result, the Florida Derby boasts a roster of winners almost as flashy as a Triple Crown race. We’ve seen many memorable Florida Derby victors in recent years, but a horse really needs to be Hall of Fame worthy before they can rank among the greatest Florida Derby winners of all time.

Here’s my take on history’s five best Florida Derby winners, all of them Hall of Fame inductees. See whether you agree or disagree with my conclusions.

Although a one-length tally in the Florida Derby marked the sixth stakes win of Northern Dancer’s career, his best was still to come. During a near-perfect spring campaign, Norther Dancer displayed a combination of unwavering tenacity and sheer brilliance to win the Blue Grass, Kentucky Derby, Preakness and Queen’s Plate. His 2:00 clocking in the Derby set a track record, and only a third-place effort in the Belmont Stakes prevented Northern Dancer from sweeping the Triple Crown. He later became a breed-shaping sire of the highest caliber, and Northern Dancer’s legendary stud record gives him the nod over similarly accomplished runners for the No. 5 spot in my rankings.

Although Holy Bull never won a classic or a Breeders’ Cup race, his overall resume stamps the speedy gray as one of the greats. A six-time Grade 1 winner, Holy Bull used a 5 3/4-length romp in the Florida Derby as an early steppingstone to a 1994 Horse of the Year title highlighted by blowout wins in the Metropolitan Handicap (G1) and Woodward (G1) and a refuse-to-lose victory against a deep field in the Travers (G1). From seven furlongs to 1 1/4 miles, Holy Bull was a beast.

One of the best horses hardly anyone talks about, Carry Back was as tough as nails and one of the most accomplished runners of his generation. After starting 21 times as a juvenile (ending the season with a win in the Remsen), Carry Back used a tenacious head victory in the Florida Derby as one of his seven prep races for the 1961 Triple Crown series. Powerful late rallies carried the fan favorite to victories in the Kentucky Derby and Preakness, and by the end of his 61-start career, Carry Back had added major triumphs in the Metropolitan Handicap, Monmouth Handicap and Whitney Stakes to his decorated resume.

A champion at age 2 and 3, Nashua was one of the last great stars trained by the legendary “Sunny Jim” Fitzsimmons. A well-measured neck triumph in the Florida Derby was one of many important prizes Nashua claimed during his stellar 30: 22-4-1 career. The Preakness… the Belmont… the Hopeful… the Futurity… the Wood Memorial, the Widener, the Suburban, two renewals of the Jockey Club Gold Cup, and a match race against Kentucky Derby winner Swaps — Nashua won all of these plus eight other stakes. It’s no wonder he’s in the Hall of Fame.

As amazing a record as Nashua compiled, Spectacular Bid went even better, retiring with a phenomenal 30: 26-2-1 tally. The winner of four Eclipse Awards across three seasons, Spectacular Bid won a total of nine Grade 1 races during his 2-year-old and 3-year-old campaigns, with a 4 1/2-length tally in the Florida Derby preceding daylight victories in the Kentucky Derby and Preakness. Yet for all of Spectacular Bid’s accomplishments as a youngster, his 4-year-old season was even better. Eight starts, eight victories, including five Grade 1 wins and a walkover in the Woodward (G1). You won’t find many horses better than Spectacular Bid anywhere in the record books.

Which Florida Derby winners would you rank as the greatest of all time?