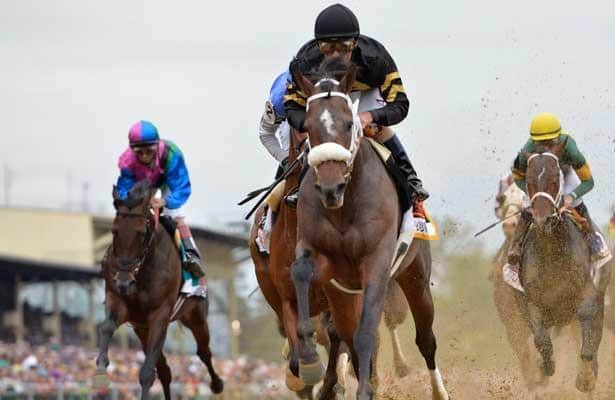 Unlike the Kentucky Derby, which boasts a history dotted with major long-shot winners, the Preakness (G1) has been a formful event. Significant upsets are uncommon in the second jewel of the Triple Crown; in fact, no horse has ever won the 1 3/16-mile classic at odds higher than 23-1.

So which horses do rank as the biggest upset winners of the Preakness, keeping in mind that “biggest” is a relative term? Let’s explore the five highest-priced Preakness champs in the history books.

A perfect ride from Hall of Fame jockey Gary Stevens carried Oxbow to the most recent upset of note in the Preakness. Overlooked at odds of 15-1, the stoutly bred colt strolled along through slow fractions of :23.94, :48.60, and 1:13.26, then kicked on strongly down the stretch to score by 1 3/4 lengths in 1:57.54. Kentucky Derby (G1) winner and 7-10 favorite Orb failed to factor while finishing a distant fourth.

If not for a sloppy track, 1972 Kentucky Derby and Belmont Stakes winner Riva Ridge might have swept the Triple Crown. But the waterlogged footing at Pimlico proved problematic for the 3-10 favorite, who weakened to finish fourth as Bee Bee Bee splashed his way to a gate-to-wire upset. The unheralded Maryland-bred had to dig deep to stem off a late charge from No Le Hace but ultimately crossed the wire clear by 1 1/2 lengths in 1:55 4/5.

By the time Display retired with a career tally of 103: 23-25-27 and more than a quarter million in earnings, he had cemented his legacy as a racehorse of exceptional talent and durability. But the writing wasn’t yet on the wall when Display squared off against a dozen rivals in the 1925 Preakness. Disregarded at 19-1 in the betting, Display came charging from 11th place to beat fellow deep closer Blondin by a thrilling head in 1:59 4/5.

The year before Display shocked bettors at the Preakness, Coventry sprung an even bigger surprise. In the first Preakness held over 1 3/16 miles, Coventry settled off the early pace then steadily advanced to take command from front-running favorite Backbone (winner of the inaugural Wood Memorial) and dominate by four lengths at 21-1. Remarkably, the Preakness would rank as Coventry’s lone victory during a brief five-race career.

More than four decades later, Master Derby’s upset – achieved in 1:56 2/5 – remains the biggest in Preakness history from a pari-mutuel perspective.